Polypoidal choroidal vasculopathy (PCV) is a disease of the choroidal vasculature.  It is present in both men and woman of many ethnicities, characterized by serosanguineous detachments of the pigmented epithelium and exudative changes that can commonly lead to subretinal fibrosis. Evidence supports that symptomatic patients with PCV can have complete regression without severe vision loss with photodynamic therapy (PDT) and anti-VEGF treatment.

The disease process known now as polypoidal choroidal vasculopathy (PCV) was described by Dr. L Yannuzzi during a presentation of cases at the American Academy of Ophthalmology in 1982[1]. He described patients with subretinal, vascular lesions associated with serous and hemorrhagic detachments of the retinal pigment epithelium (RPE)[1][2]. The name reflects the appearance of a network of branching choroidal vessels with terminal, polyp-like aneurysmal dilations.

PCV is described as a disease present in middle-aged black women[1][3], but it has been established that it can occur in both sexes and is most commonly diagnosed in patients between the ages of 50 and 65 years. In many Asian countries researchers have estimated the prevalence of PCV among their population; in Japan higher prevalence rates are present of approximately 23% to 54% in patients with presumed age-related macular degeneration (AMD)[3][4][5][6][7][8][9][10]. Prevalence rates of between 4% and 9.8% have been reported in Caucasian patients with presumed AMD[5].

The etiology is not clearly understood. It has been proposed that there is a choroidal vasculature propensity for dilation and aneurysmal formation[5][11].

The pathogenesis of PCV is not clearly understood. Gross specimens are described in the literature for their histopathologic findings; Uyama et al described large vascular channels in their early pathological state, also observed by other researchers[2].

Unfortunately, there is no mechanism for prevention at this time. With more research in genetic markers there may be a time when risk of developing PCV can be better estimated and treatment can be tailored to individual patient needs.

The best technique currently available from differentiating polypoidal choroid vasculopathy from other types of neovascularization is indocyanine green angiography (ICGA)[12]. The ICG molecule is excited by the absorption of infrared light in the range from 790 to 805 nm. The intravascular retention of the ICG molecule allows better resolution of the choroidal vasculature. Fluorescein angiography (FA) is not as useful because it lacks the same resolution of the choroidal vasculature as ICGA. However, it is able to show large polypoidal changes.

Thorough history and dilated fundus exam are the first steps in diagnosis. On fundus examinations, one can see orange-reddish bulb-like lesions budding from choroid into the subretinal space. These lesions can be associated with recurrent and significant hemorrhagic and exudative detachments of retina and retinal pigment epithelium (RPE). Hard exudates are also common. On occasions, patients may present with break-through vitreous hemorrhage.

Common visual complaints can include blurred vision, central or paracentral scotoma, and dim vision in the affected eye.

The constellation of clinical appearance, ICGA, FA in certain cases, along with high resolution optical coherence tomography OCT assist in making the diagnosis of this clinical entity (Figure 1-3). 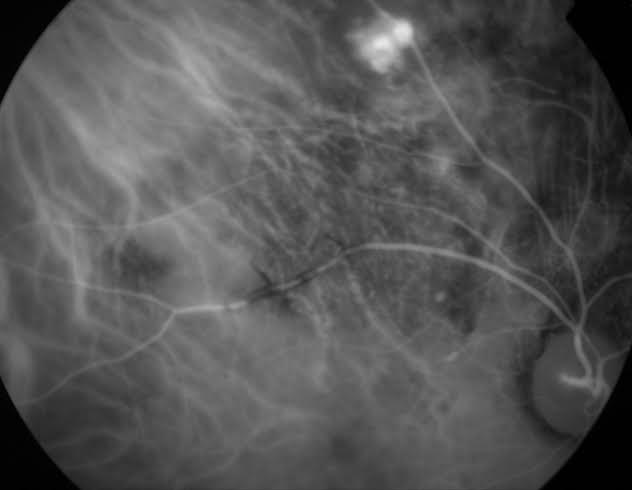 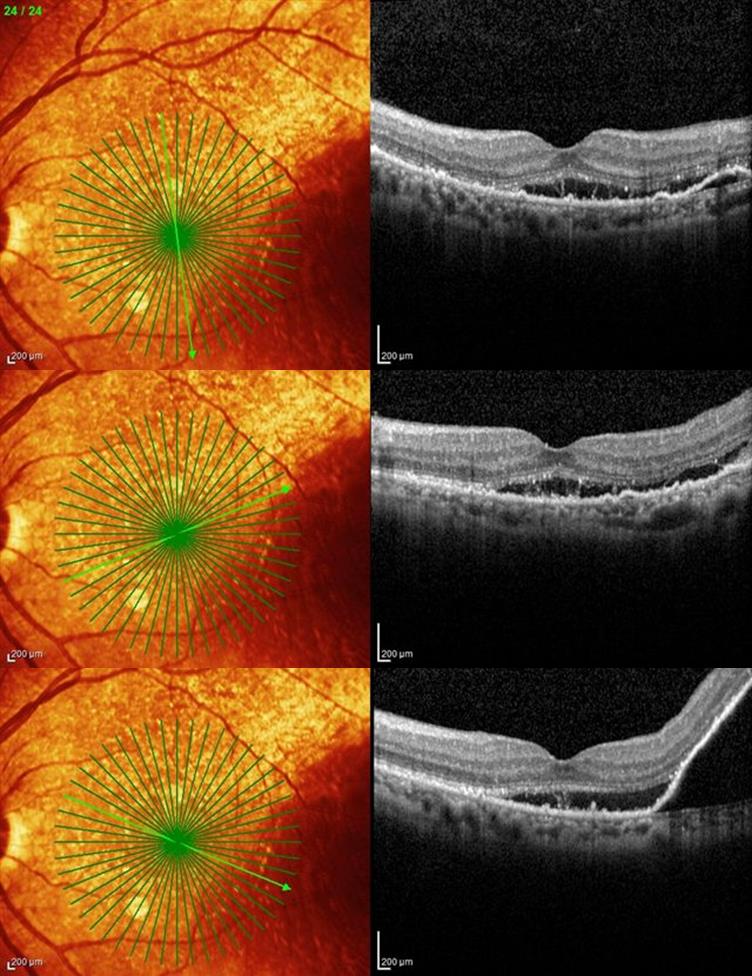 Figure 2. Spectral domain OCT® of the left macula of a patient with suspected PCV. 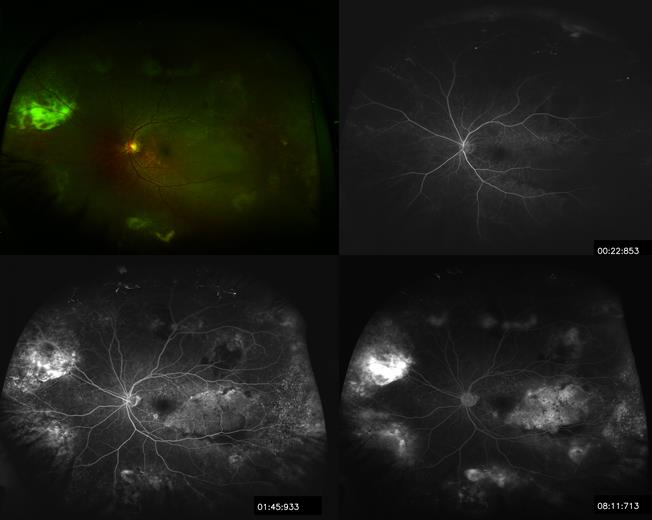 PCV lesions on FA resemble occult CNVM lesions and when submacular, they can be mistaken for AMD. A peripheral notch at the margin of a serous pigment epithelial detachment may give a clue to the location of the polyp. RPE atrophy is manifested as window defects. Subretinal or sub-retinal pigment epithelial hemorrhage gives block fluorescence. FA also helps to rule out other differentials including CNV, microaneurysms and retinal angiomatous proliferans.

ICGA with its ability to highlight choroidal vasculature is the standard for diagnosis of polypoidal lesions. On ICGA, the branching network of PCV is easily seen. The polyps present as focal hyperfluorescent spots. In later stages, reversal pattern of dye is seen with the center of the lesion becoming hypofluorescent and surrounding becoming hyperfluorescent. Finally, in the very last stage, there is “wash-out” of the lesion that is seen in non-leaking PCV lesions[13].

The EVEREST trial diagnosed PCV based on the following criteria:[14]

Early subretinal ICGA hyperfluorescence (appearing within the first 5 min of ICG dye injection) and at least one of the following diagnostic criteria:

The abnormal vascular channels seen in IPCV are of 2 types (https://www.ncbi.nlm.nih.gov/pmc/articles/PMC4413842/figure/BJOPHTHALMOL2014305674F2/).[14] "A typical BVN originates from a feeder vessel and spreads outwards, with polyps typically located at the periphery. A second, less common type was interconnecting channels, which consisted of a network of crisscrossing choroidal vessels which supply the associated polyps. The dye has no specific point of origin or direction of flow, unlike a BVN."[14] The abnormal vascular channels are best seen using dynamic ICGA within 30 seconds and after 1 min it is difficult to identify these vessels as normal choroidal vessels also fill up. Dynamic ICGA is crucial to document the pulsatile filling of popyps. Stereo ICGA pair images at 1 min or 3 min is adequate to diagnose, locate and measure the greatest linear dimension (to guide photodynamic therapy) of the polyp and abnormal vascular channels.[14] Dilation of large choroidal vessel and choroidal vascular hypermeability may also be noted in ICGA.

Central Serous Chorioretinopathy and PCV share a common pachychoroid spectrum and clinical differentiation between the 2 may be difficult in clinical setting, though various factors including age, ICGA and OCT features guide the clinician for optimal management.

OCT is not only helpful in identification of subretinal or sub-RPE fluid, it can also delineate polypoidal lesions. These lesions resemble dome-like elevations of RPE with moderate internal reflectivity. In most cases, there is also a highly reflective line just below these lesions consistent with location of vascular branching network[17]. The dual reflective layers are also called “double-layer sign,” and are seen in 59% of eyes with PCV[18]. In summary the OCT B scan features include

The OCT C scan features include

The differential includes other entities that can cause subretinal neovascularization. History and clinical presentation would differentiate PCV from the following limited list of disease processes including: age-related macular degeneration (type 1 or type 2), central serous chorioretinopathy, pathological myopia with neovascularization, and choroidal tumors or metastases.

Laser therapy to the polyp and BVN occupying a small area away from fovea may be considered.

LAPTOP study[23] from Japan showed that ranibizumab resulted in visual gain from baseline at 24 months, the PDT group did not gain vision.

PLANET study[24]- at 12 months aflibercept monotherapy was non-inferior to aflibercept+PDT in visual outcome.

EPIC study[25]- at 6months aflibercept monotherapy stabilized vision and resulted in resolution of hemorrhagic and exudative complications regression of polyps in around 70% patients.

Regardless of choice of treatment, patients should be followed on regular intervals to detect and prevent subretinal/subRPE fluid and hemorrhage.

The natural course of PCV depends on the size and extent of serosanguineous detachments of the pigmented epithelium and exudative changes, commonly leading to subretinal fibrosis. In a study by Uyama et al, high risk eyes were those with cluster of polypoidal lesions whereas eyes with solitary lesions had favorable prognosis[26]. Polypoidal lesions are usually located at the margin of the PED. Following the spontaneous resolution of the acute serosanguineous complications, there may be signs of subretinal fibrosis, pigment epithelial hyperplasia, and atrophic degeneration[18],[22],[27].

Depending on the extent of area involved prognosis is generally good. Even in patients with longer chronicity of disease, studies have shown halting of visual decline. Evidence supports that symptomatic patients with PCV can have complete regression without severe vision loss with PDT and anti-VEGF treatment[22].