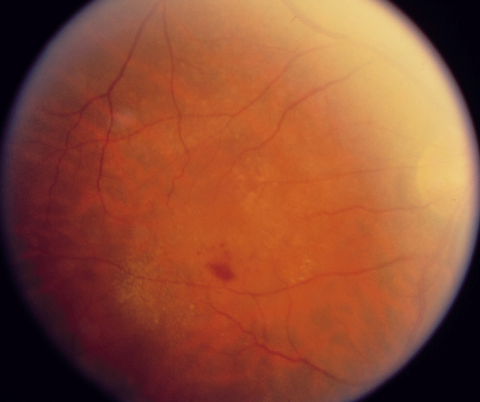 Retinal pigment epithelial detachments (PEDs) are characterized by separation between the RPE and the inner most aspect of Bruch's membrane. The space created by this separation is occupied by blood, serous exudate, drusenoid material, fibrovascular tissue or a combination.

The classification of PEDs in AMD can be divided based on their contents. Categories include drusenoid, serous, vascularized, or mixed components. Drusenoid PEDs are seen mostly in nonneovascular or dry AMD. Serous PEDs are typically associated with the neovascular or wet form of AMD, but their natural history is relatively more favorable. Vascularized PEDs associated with Type 1 (sub-RPE) neovascularization and wet AMD, in contrast, have a greater risk of vision loss. In eyes with AMD, it is not uncommon to see more than one type of PED.[2]

The development of choroidal neovascularization (CNV) has been associated with long-standing PED. Recognition of its existence is a major concern secondary to its increased risk for severe vision loss.[3]

Various Ocular and Systemic Diseases can be associated with PEDs

The retinal pigment epithelium (RPE) monolayer, extending from the optic disk margin uninterrupted through to the ciliary body epithelium, is bounded by the apical surface of the retina and on its basal surface by the collagenous layer of Bruch’s membrane. [3] Proper anatomical apposition between the retina, the RPE, and Bruch’s membrane is crucial for nutritional support of the photoreceptors, retinol metabolism, phagocytosis of the photoreceptors outer segments, and formation of the outer blood-retinal barrier.

The forces maintaining normal adhesion between the RPE and Bruch’s membrane are not well understood. Under normal conditions, there exists a net bulk flow of fluid towards the choroid from the vitreous, with its generation dependent upon hydrostatic and osmotic forces within the two bodies. Both the RPE and the retina produce resistance to this fluid flow. The RPE has greater resistance due to its limited hydraulic conductivity, subsequently, a vector force is generated pushing it against Bruch’s membrane.[6] The attachment of the RPE basement membrane to Bruch’s membrane is possibly supplemented by regions of hemidesmosomes containing fine filaments of laminin, proteoglycans and collagen types IV and V.[7]

Age-related deposition of lipids, such as cholesterol esters, triglycerides, and fatty acids in Bruch's membrane may change its permeability altering retinochoroidal flow.[2] Fluid may accumulate in the sub- RPE space, unable to pass through Bruch membrane, resulting in RPE elevation.

Patients will typically present with painless blurred vision and/or partial vision loss. Others have described a dark shadowing effect or sensation that a curtain has been pulled in front of their vision.

Often PEDs will transilluminate if they are filled predominantly with serous fluid when observed at the slit lamp. Pigment figures can also indicate chronicity of disease. Examination reveals a reticulated pattern of increased pigmentation extending radially over the PED, likely due to migration of RPE cells into the outer retinal space however it is unclear whether these carry a prognostic significance. PEDs are better appreciated in retroillumination during slit lamp biomicroscopy with 90D or 78D lens.

Drusenoid PED: Drusenoid PEDs appear as well-circumscribed yellow or yellow–white elevations of the RPE that are usually found within the macula. They may have scalloped borders and a slightly irregular surface. It is not uncommon to observe a speckled or stellate pattern of brown or gray pigmentation on their surface.

Serous PED: Serous PED appears as a distinct circular or oval-like detachment of the RPE. Clear or yellowish–orange in color, this dome-shaped elevation of the RPE has a sharply demarcated border. Typically, these are assocoated with CSC.

Vascular PED: Gass reported that a flattened or notched border of the PED is a frequent and important sign of hidden associated CNV.[8] Other biomicroscopic findings suggestive of possible occult CNV association include yellow subretinal and intraretinal exudates that occur typically at the PED margins, subretinal hemorrhages at PED margins, sub-RPE blood which appears darker than subretinal blood with a fluid-level sign, irregular elevation of the PED because of organization in the lesser elevated area, and radial chorioretinal folds surrounding the PED caused by the contraction of Bruch membrane and the CNV.[8]

Serous PED: Serous PEDs most often have an even distribution of hyperautofluorescence corresponding to the detachment and are surrounded by a hypoautofluorescent border.

Vascular PED: Fundus autofluorescence imaging of vascularized PEDs has not been evaluated systematically in large series of patients. More work needs to be done to correlate the FAF pattern of PEDs and any associated CNV with findings obtained with FA and SD-OCT.

Drusenoid PED: Drusenoid PEDs demonstrate faint hyperfluorescence in the early phase that increases throughout the transit stage of the study without late leakage. The correlation of FA findings with SD-OCT and occasionally ICGA may help differentiate drusenoid from vascularized PEDs.

Serous PED: Serous PEDs demonstrate intense early hyperfluorescence and brisk, progressive pooling within the PED in a homogeneous and well-demarcated manner. Late staining of serous PEDs is typical and may make it difficult to differentiate these PEDs from those that are vascularized based on FA alone. In cases where there is suspicion of associated CNV, ICGA is a useful imaging modality. [2]

Vascular PED: From the analysis of fundus photographs of the macula and FA, the Macular Photocoagulation Study identified two main patterns of CNV: classic and occult. Classic CNV is characterized by a well-defined area of early typically lacy hyperfluorescence with progressive leakage in the late stages of the study. An additional fluorescein angiographic pattern of vascularized PEDs is a serous PED with a notch (e.g., kidney bean–shaped PED) or hot spot that may be referred to as a vascularized serous PED.

Drusenoid PED: Using a confocal scanning laser ophthalmoscope (SLO) system and ICGA, the content of the drusenoid PED will block the fluorescence emitted from the underlying choroidal vasculature and, therefore, the PED will appear as a homogeneous hypofluorescent lesion during the early phase and remain hypofluorescent throughout the transit.[9]

Vascular PED:Vascularized PEDs may demonstrate either of two major findings with ICGA analysis. A focal bright area of well-defined hyperfluorescence less than 1 disk diameter in size referred to as a hot spot or focal CNV.

Vascular PED: Optical coherence tomography allows better visualization of the exact relationship between neovascular membranes and PEDs. Enhanced depth imaging OCT enables better visualization of the contents of PEDs. Untreated PEDs demonstrate evidence of fibrovascular proliferation, often coursing along the back surface of the detached RPE. Features of PED in idiopathic polypoidal choroidal vasculopathy has been described in detail here.

Depending on the etiology of the PED, different treatment modalities have been explored to prevent vision loss.

Currently no treatment for serous PED is proven effective, nor are recommendations for treatment guidelines established. Several strategies, however, have being used to treat vascularized PEDs, including laser photocoagulation, photodynamic therapy (PDT), intravitreal steroids and anti-VEGF therapy. The results from the VIP trial indicated that PDT could significantly reduce the risk of moderate and severe vision loss among patients with subfoveal occult CNV.[12] Another treatment modality, described recently by Costa et al as a pilot trial, is photothrombosis at the neovascular ingrowth site using ICG visualization followed by laser application to feeder vessels. Occlusion of the feeder vessel with cessation of leakage, restoration of macular architecture and visual improvement were induced in two patients with CNV associated with PEDs. [13]

It is well established that the natural history of vascularized PEDs may be complicated by RPE tears. The most important FA feature identified which predicted RPE tears was the uneven filling of the PED, with a hypofluorescent central area that remained dark until the late angiographic frames as well as early hyperfluorescence at the borders of the PED that grew progressively, and sometimes demonstrated a notched edge. [14]

The location of the PED is important in determining prognosis. Patients with extrafoveal PEDs tend to preserve good visual acuity, whereas patients with subfoveal PEDs can have worse visual outcomes. The course of PEDs also varies in CSC versus AMD. Mudvari et al demonstrated with a mean follow-up of 49 months that 65% of PEDs in CSC completely resolved and the other 35% PEDs remained persistent.[15] Retinal pigment epithelium atrophy was evident in 86% of patients over the area of the resolved PED. Others have reported similar findings and noted that patients with a persistent PED had poorer visual outcomes. [16]

The natural course of Type 1 or occult CNV can vary considerably. Type 1 CNV patients can appear relatively asymptomatic and may never experience vision loss despite continued growth of the neovascular lesion.[17] On the other hand, large vascularized or hemorrhagic PEDs are typically associated with significant vision loss. Additionally, Type 1 CNV can erode through the RPE, becoming Type 2 CNV and follow a more aggressive course with more progressive and severe vision loss.

The RPE tear rate in eyes with PED in natural history studies has been noted to be between 10% and 12%,[2] but this rate seems to be accelerated after anti-VEGF therapy (up to 17%).