Myopic traction maculopathy (MTM), also known as myopic foveoschisis, is a schisis-like thickening of the retina in eyes with high myopia with posterior staphyloma. The pathologic features may also include lamellar or full-thickness macular holes, shallow foveal detachments, and inner retinal fluid.[1] It has been suggested that the schisis-like thickening represents edema from traction rather than a true schisis.[2]

MTM is estimated to affect between 9 and 34% of highly myopic eyes with posterior staphyloma.[1][3][4]It is more prevelant in populations with high myopia and may be more prevalent in women.[2] In 1958, Phillips described localized posterior retinal detachments in patients with high myopia and posterior staphylomas without the presence of retinal holes.[5] He postulated that myopic chorioretinal atrophy and the presence of a staphyloma were likely involved in the pathogenesis. Prior to optical coherence tomography (OCT), MTM was difficult to distinguish from shallow retinal detachments and macular holes, particularly because slit-lamp biomicroscopy is limited in patients with myopic chorioretinal atrophy.[6][7] Takano and Kishi first reported detection of MTM using OCT in 1999. They described foveal retinal detachment and foveoschisis in patients with high myopia with posterior staphylomas.[4] Since then, spectral-domain OCT has been shown to be even more sensitive in detecting the pathologies associated with MTM.[6] 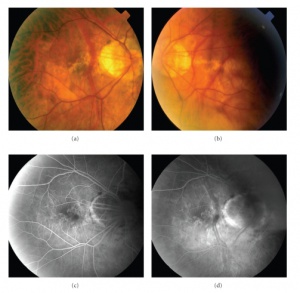 The pathogenesis of MTM is believed to be multifactorial, involving anterior traction, intrinsic rigidity of the internal limiting membrane (ILM), and progression of the posterior staphyloma. [8][9][10][11][12][13][14][15][16] The source of anterior traction may vary between patients and includes vitreomacular traction, remnant cortical vitreous layer, epiretinal membrane, and retinal vascular traction.[17] The results of several studies showing anatomical resolution of foveoschisis after vitrectomy with ILM peeling support anterior traction as a key component of MTM.[17][18][19][20][21][22][23] Scleral buckling surgeries have also been successful in treating MTM, supporting the role of the posterior staphyloma and rigidity of the ILM in the pathogenesis.[24][25][26]

The histopathology of myopic foveoschisis demonstrates that schisis cavities can form in various layers of the neurosensory retina in the macula including the outer plexiform, inner plexiform and nerve fiber layers.[27] 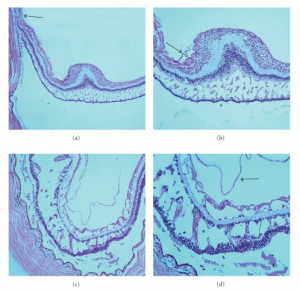 There have been limited studies of the natural course of the disease. Some eyes may remain stable for many years while other eyes progress to more serious complications such as full thickness macular holes or foveal detachments.[7][9][12][15][28][29] Spontaneous resolution of MTM has also been reported following posterior vitreous detachment. Risks factors for worse prognosis and progression to serious complications include severity of macular retinoschisis[30] and presence of premacular structures such as epiretinal membranes.[9]

The diagnosis of MTM was difficult prior to OCT because it was difficult to distinguish from shallow retinal detachments and macular holes using slit-lamp biomicroscopy.[6][7] Spectral domain OCT has been shown to be sensitive in detecting the pathologies associated with MTM.[6] Panozzo et al described a system to categorize OCT findings in MTM. That system originally focused on the presence epiretinal membrane, vitreomacular traction from incomplete vitreomacular separation, retinal thickening with or without cystoid edema, separation of the neurosensory retina into two or more layers, retinal detachment, lamellar or full thickness macular holes.[1]

MTM presents in patients with high myopia and posterior staphylomas. Patients may complain of worsening visual function, increased metamorphopsia with decreased visual acuity or they may be relatively asymptomatic with stable visual acuity and no visual complaints.[1][3] Fundus examination will reveal features typical of degenerative myopia, including chorioretinal atrophy, peripapillary atrophy, posterior staphyloma and lacquer cracks. Biomicroscopy is limited in distinguishing pathologies in highly myopic eyes and OCT is critical in diagnosing MTM. 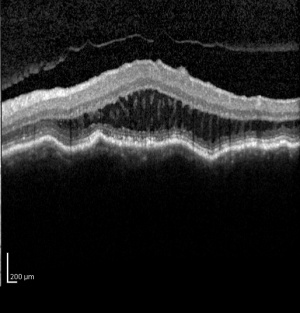 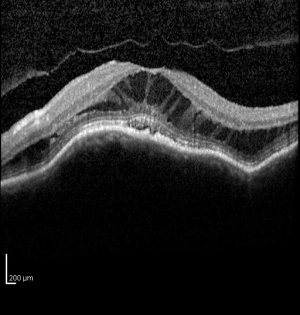 The management of MTM is somewhat controversial because the natural course of the disease is not clear and the potential complications of surgical intervention are serious. Few small studies have looked at the natural disease course of MTM and found that some eyes remain stable for many years while other eyes progress to full thickness macular holes or foveal detachments.  A recent larger study of MTM found that the incidence of progression to serious complications was related to the severity of macular retinoschisis.[30] This correlation could be used to guide timing and selection of patients for surgical intervention. Premacular structures have also been reported to correlate to worse prognosis, and the presence of such structures could potentially be used to justify intervention.[9]Some authors advocate that surgical treatment is indicated in MTM when VA is impaired or the patient complains of visual disturbances.[9][20] Another study showed persistent photoreceptor defects and irregular choroidal detachments in MFS patients with poor post-operative visual outcomes, and recommends timing of surgery for MFS patients with there is threatened disruption of the outer retina on OCT.[23]

PPV with ILM peel has been shown to result in anatomic resolution of MTM and to improve visual acuity, even without the use of gas tamponade.[30] [31] ILM peeling relieves anterior traction on the macula and can remove scaffolding for cellular proliferation,[31] possibly decreasing the risk of recurrence.[8][14][31][32][33]  Removing the rigid ILM may also allow the retina to conform to the posterior staphyloma, which has been shown to contribute to macular detachment. One serious risk of ILM peeling in MTM is macular hole formation, which has been reported by several authors and observed to occur intraoperatively.[18][20][22][23][34]4 ILM peeling is technically difficult in patients with MTM because the ILM is thinner in highly myopic eyes, and may be more prone to tearing and iatrogenic macular hole formation. Interestingly, anatomic and visual acuity outcomes have been reportedly similar using PPV with and without ILM peel.[35][36][37] One option that addresses the need for ILM peel with the risk of macular hole is an alternative fovea-sparing ILM peel. Various techniques have been described and limited studies have shown favorable outcomes.[38][39] Scleral buckling has also been explored in the treatment of MTM. The benefits of scleral buckling include avoiding cataracts and the need for cataract surgery, as well as avoiding iatrogenic macular holes associated with ILM peeling. Unlike PPV with ILM peeling, scleral buckling treats the structural contribution of the posterior staphyloma which may create shearing forces, stretching, and eventual failure of internal structures causing MTM. Buckling also provides direct mechanical action to bring the RPE closer to the retina and may provide quicker resolution than vitrectomy.[25] The options for buckling include silicone bands or macular plombes, independently or in conjunction with PPV.[24][25][26] Suprachoroidal buckling has also been studied in a limited number of MTM patients and involves using a specially designed catheter, inserted into the suprachoroidal space, to inject hyaluronic acid into the area of the staphyloma to indent the choroid.[40] Though the majority of patients with scleral buckling in published studies had resolution of MTM and improved BCVA, complications included macular hole, recurrence of MTM, subretinal hemorrhage with and without choroidal neovascularization, choroidal detachment, RPE atrophy, and extrusion of the buckle.

Prognostic indicators for surgical outcomes in MTM include preoperative visual acuity, [19][22][40] duration of symptoms, axial length, and presence of a foveal detachment.[20][34][41]  Staphyloma height and pre-operative choroidal thinning have been correlated with poor post-operative visual acuity and anatomic resolution.[42]