Sinus mucoceles are epithelial lined cavities containing sterile mucus which develop as the result of outflow obstruction of a sinus ostium. When containing pus, it is called a mucopyocele. They most commonly originate from the frontal and ethmoidal sinuses and can erode through neighboring structures such as the orbital walls. Large mucoceles can encroach into the orbit causing orbital or ocular symptoms that lead the patient to present initially to the ophthalmologist. Due to the large variety of symptoms on presentation, up to 47% of patients can be misdiagnosed on initial presentation with a delay of diagnosis for up to 520 weeks.[1]

Sinus mucoceles are rare occurrences. The incidence and prevalence are not fully known. A retrospective study from Paris, France by Devars du Mayne et al.[2] identified 68 patients with sinus mucoceles over 16 years (1993 to 2009). Seventy-five percent of these patients had a history of prior sinus surgery. In another series (the largest published) from the Hospital of the University of Pennsylvania by Scangas et al., 102 patients with 133 mucoceles over 24 years (1987 to 2011)[3] were identified. Of note, only 43.6% of the patients from this series had history of prior sinus surgery. Patients can present between the 2nd and 9th decades of life with a mean age in the early fifties. Some studies report that males are more often affected (as high as 7:1) but others report no gender predilection.[4]

Obstruction of the sinus ostium can be due to a variety of causes including trauma, surgery, neoplasm, infection, inflammation, and radiation. Trauma and surgery can cause inflammation and scarring which ultimately results in obstruction of the sinus outflow. Mucoceles can form after both sinus and lacrimal duct surgeries.[5] Chronic sinusitis due to infectious and inflammatory processes can also lead to obstruction. Similarly, treatment with external beam radiation[6] can also produce similar changes and result in mucocele formation. Sinus neoplasms, including benign myxomas, may present similarly to mucoceles.

The most common sites of involvement include the frontal, frontoethmoidal, and ethmoidal sinuses; it is thought that these lesions account for 70-90% of all mucoceles.[3][7] The maxillary sinus is less commonly affected, and the sphenoid sinus is rarely affected.

On hematoxylin and eosin staining, pseudostratified ciliary epithelium (benign respiratory mucosa) can be seen along with acute and chronic inflammatory infiltrates and reactive bone formation. Prostaglandins and collagenases play a role in osteolysis and facilitate the expansion of the mucus-containing cyst.[7]

Mucoceles are typically slow-growing expansile masses. Symptoms can vary greatly depending on the location of the mucocele and its extension into the orbit or cranium. They can be asymptomatic and incidentally found on imaging, or vision threatening on presentation. Patients can present with unilateral or bilateral disease and with single or multiple mucoceles.

Similarly in another series by Duvars du Mayne et al. described above, 28% of patients presented due to ocular or orbital symptoms.[2] The most common findings are the result of mass effect including proptosis, globe displacement, diplopia, eyelid swelling, pain, headache, restricted extraocular motility. More posterior lesions are at risk of causing optic neuropathy via compression, ischemia or inflammation.

Patients have also been reported to present with:

Another retrospective chart review performed over 31 years in the UK demonstrated nearly 450 patients presented to an ophthalmologist with an undiagnosed sinonasal pathologies; the most common symptom was proptosis and the most common pathology was a sinus mucocele (38%). [13]

In the series by Scangas et al., the time to onset of a mucocele after surgery versus trauma was strikingly different. Patients on average presented with a mucocele 5.3 years after prior functional endoscopic sinus surgery and 17.7 years after maxillofacial trauma without history of prior surgery.[3] 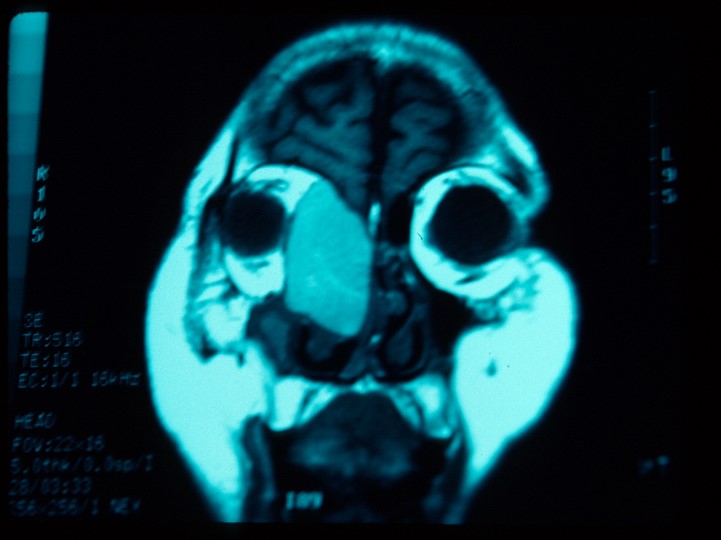 Rarely, intraorbital mucoceles have been reported to occur in the absence of sinus disease.[14] It is postulated that this can occur from trauma causing an island of sinus tissue to be displaced into the orbit or due to ectropic tissue from abnormal embryologic development. 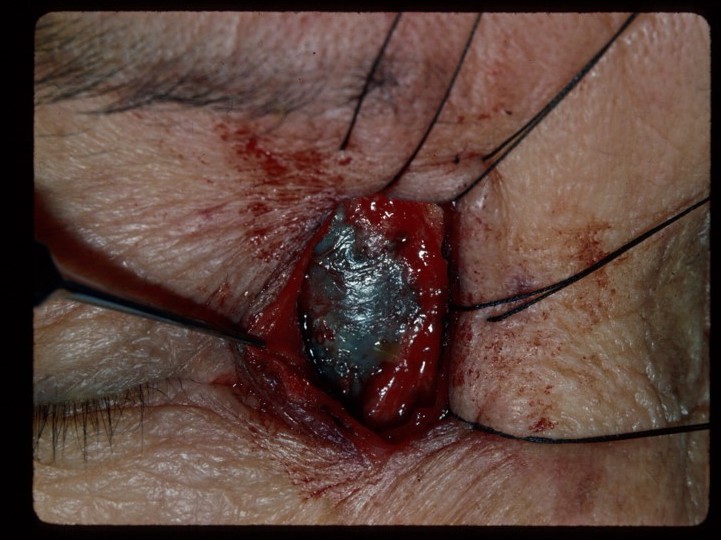 If the clinical picture is concerning for cellulitis or abscess, intravenous or oral antibiotics such as amoxicillin-clavulanic acid should be initiated.

The treatment of mucoceles is surgical and performed by oculoplastic surgeons or ears, nose, and throat (ENT) surgeons. Most commonly, functional endoscopic sinus surgery (FESS) is performed with marsupialization of the mucocele and preservation of mucosa. The endoscopic approach is now preferred when possible due to lower morbidity rates compared with traditional open surgery. In some cases, the sinus cavity may be filled with fat to obliterate the potential space. Long term success is dependent on successful re-establishment of sinus drainage.[1]

Though mucoceles are benign, the complications that may result can be potentially devastating if appropriate treatment is not promptly initiated. Prognosis is generally good if treatment is started before irreversible damage results. The recurrence rate ranges from less than 10% to as high as 23% in one series with longer follow-up.[2] Of note, recurrence has been reported to occur as late as 41 years later, emphasizing the importance of long term follow-up.