In 2012, Sudhir Singh published a new manual small-incision cataract surgery (MSICS) technique based on his experience at Global Hospital Research Centre, Mount Abu, India [1][2].The MSICS and phacoemulsification are the most popular methods of cataract extraction today. The former is significantly faster, less expensive, and less technology-dependent than phacoemulsification and has been extensively practiced in developing countries such as India. However, the draw-back of most commonly practiced MSICS techniques— Blumenthal, visco expression, irrigating wire vectis, and fish-hook needle—is that they all require a large incision of 7 to 9 mm, which leads to induced astigmatism. In the intratunnel phacofracture technique, the lens nucleus is broken inside a sub−6-mm sclerocorneal tunnel incision and removed. The nucleus removal steps take place inside the sclerocorneal tunnel, in contrast with other nucleotomy techniques in which this maneuvering takes place inside the anterior chamber.

Why All Cataract Surgeons Should Learn Manual SICS Too on YouTube

Manual small incision can be done performed under peribulbar or topical anesthesia. 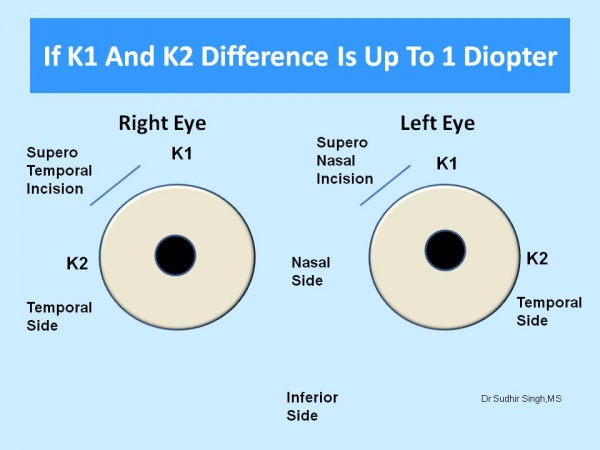 Figure 1: If K1 and K2 difference is less than 1 diopter then superotemporal incision for right eye and superonasal for left eye. 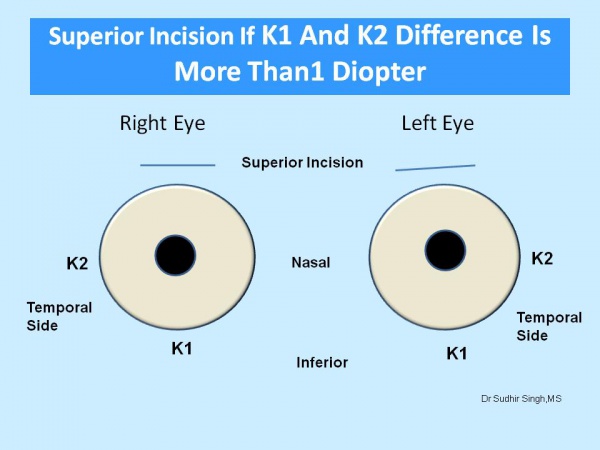 Figure 2: If K1 is more than 1.0 diopter from K2 then superior incision for both the eyes. 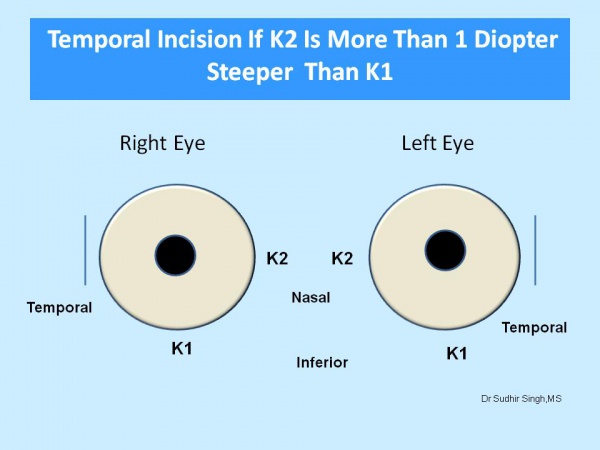 Figure 3: If K2 is more than 1.0 diopter from K1 then temporal incision for both the eyes.

The skin of the eyelids, lid margins and around the eye is cleaned with 10 percent solution of povidone-iodine solution. Drape is applied. Wire speculum is placed. Cul de sac is thoroughly washed with Ringer’s lactate solution or balanced salt solution.

A fornix based conjunctival flap at the limbus with a chord length of approximately 6.5 mm is made. After careful dissection of the Tenon’s capsule, light cautery is applied (Figure 4). 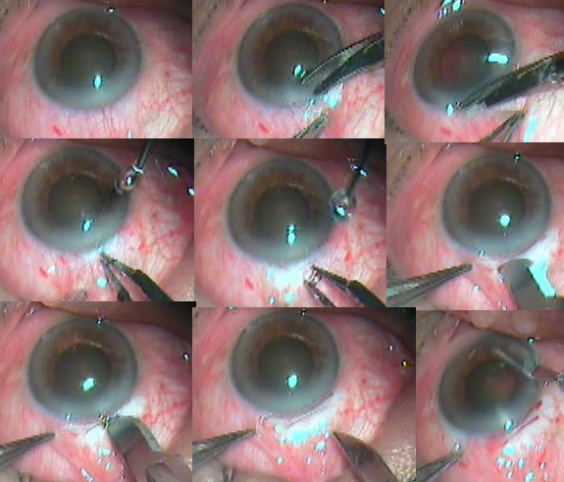 A 4- 6 mm scleral frown incision, 1.5 mm from the limbus is made with a 15 number Bard Parker blade (Figure 5). A funnel shaped sclerocorneal tunnel incision is created with a steel crescent knife. One side port is made 90 degrees apart on either side of the scleral tunnel with a 15 degree knife temporally in right eye and nasally in left eye. With a 2.8 mm keratome, the anterior chamber is entered 1.5 mm into the clear cornea. Anterior chamber is entered with 1.5 mm in clear cornea with help of 3.2 mm keratome (Figure 6). The hydroxyl propyl methyl cellulose 2 % (HPMC) viscoelsatics is injected into anterior chamber. 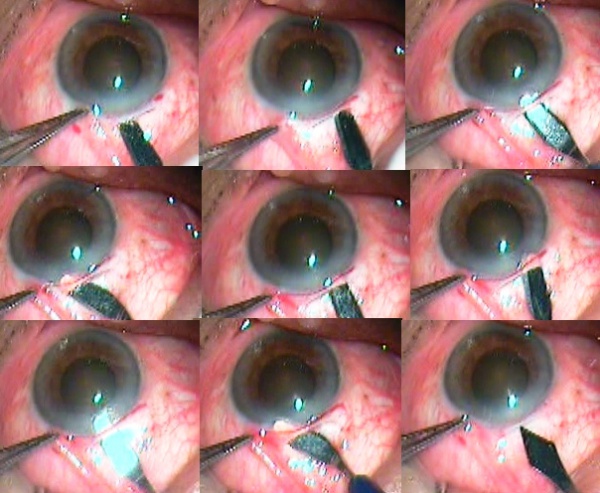 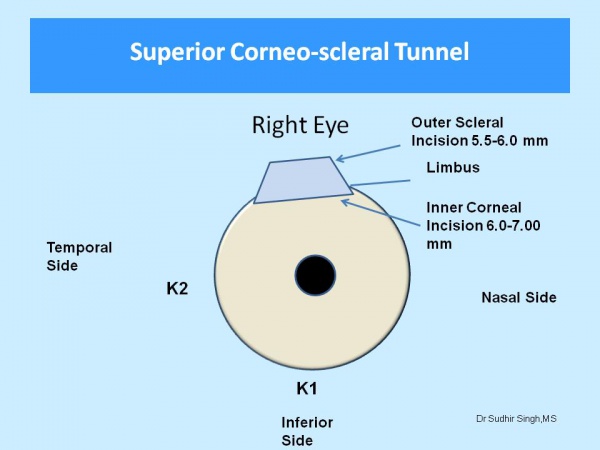 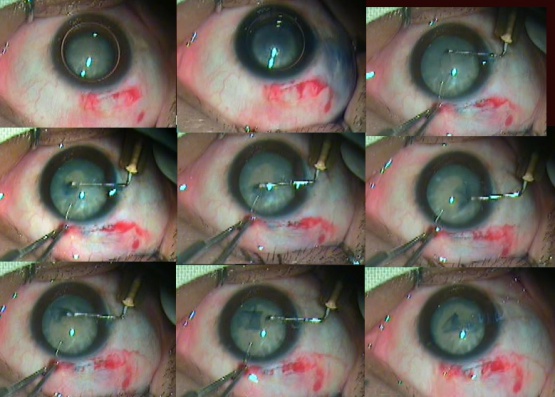 The hydrodissection is made with 26 gauge cannula placed on 2 CC syringe filled irrigating fluid.

Nucleus Prolapse in the Anterior Chamber 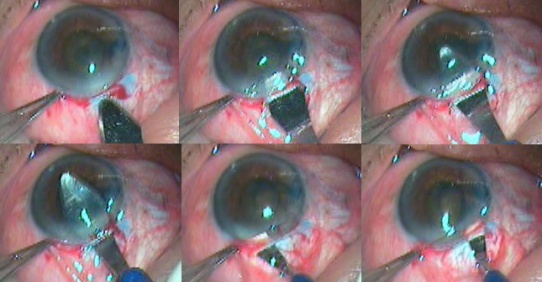 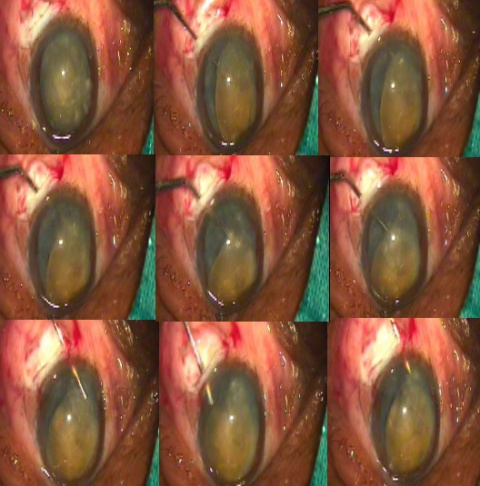 Figure 9: Demonstration of the nucleus rotation and prolapse in anterior chamber 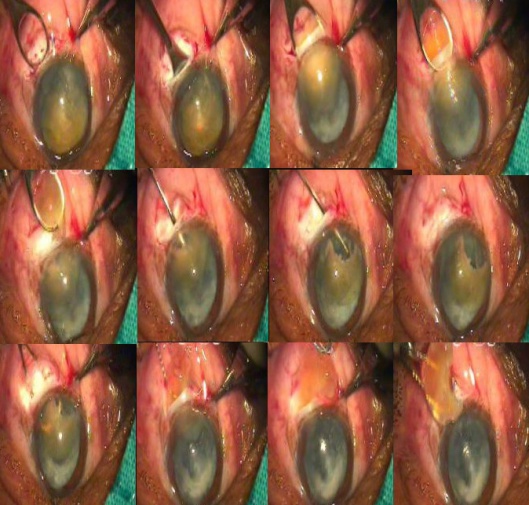 The remaining cortical matter clean up is done with direct 23 gauge Simcoe irrigating aspirating cannula. The anterior chamber is formed with Viscoelsatics (Figure 11).

The conjunctival flap is reposited back and cauterized at the edges.

Main Ports and Side ports Sealing

Main port and side ports are sealed with stromal hydration using a 26 gauze cannula. A 0.5 cc sub-conjuctival gentamycin with dexamethasone injection is given. Eye is pad patched

Management of Subluxated Cataract by SICS With CTR and IOL