Orbital hypertelorism is an abnormally increased lateral distance between the orbits, and it can also be associated with dystopia. It may be unilateral or bilateral, symmetric or asymmetric, and associated with conditions including craniofacial dysplasia, encephaloceles, and craniosynostosis. [1] When indicated for functional or aesthetic reasons, treatment involves surgery. Hypertelorism should not be confused with telecanthus, in which the distance between the pupils is normal but the medial canthi are widely spaced.

Orbital hypertelorism is a true lateralization of the orbit where the inner canthal distance (ICD), the outer canthal distance (OCD) and interpupillary distance (IPD) are all increased (figure 1). It is typically a manifestation of a craniofacial deformity and not a disease in itself. [1] 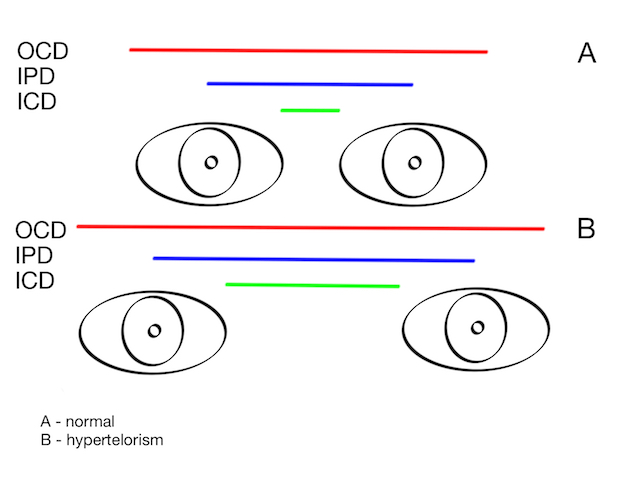 Orbital hypertelorism can be seen in a variety of conditions such as craniofacial clefts, craniofacial dysplasias and craniosynostosis syndromes,[1] like

Treatment involves corrective surgery and is indicated primarily for aesthetic reasons. The aim is to bring the orbits medially and correct any orbital dystopia or any soft tissue abnormalities.[1]

When indicated, surgery is performed between 5 - 7 years old to avoid any injury in the un-erupted tooth roots and maxillary growth disturbances. There are two operative techniques:

Box osteotomy involves an en-bloc movement of the orbits medially into the space created by resection of abnormally wide nasal and ethmoidal bones. A midline excision of skin is frequently necessary due to the excessive skin created. This technique is performed when dental occlusion is normal.

Facial bipartition involves a medial resection of the nasal dorsum in a “V” shaped form, a split in the midline of the palatal bone and a medialization of the two hemifaces. This technique is performed when there are associate dental arch deformities. For a better a result, it is also important to take soft-tissue reconstruction in consideration. It is also important to consider a medial canthopexy for better results. 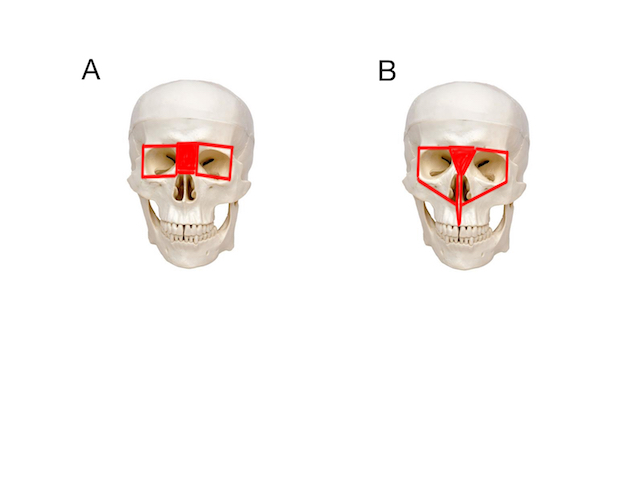 The main complications of both surgeries for orbital hypertelorism correction include excessive bleeding, risk of infection and cerebrospinal fluid leaks. Rare events also include blindness, visual disturbances, ptosis and diplopia.