Numerous studies have documented a change in measured intraocular pressure (IOP) after LASIK, PRK, and other refractive surgeries. While the procedures themselves may cause a change in intraocular pressure, as with Steroid Glaucoma after LASIK or interface fluid[1], in most cases the true IOP remains the same and only the measurement is affected. The change in corneal biomechanics after refractive surgery causes a false underestimation of IOP that is more pronounced with applanation and indentation tonometry. Since a falsely low IOP reading may lead to a delay in diagnosis of ocular hypertension or glaucoma, ophthalmologists should be aware of the difficulty in obtaining true IOP readings after refractive surgery.

By reshaping the cornea to induce a more favorable refraction, refractive surgery alters the cornea’s biomechanical properties. These changes include a decrease in corneal hysteresis, flattening of the corneal curvature, and most importantly a decrease in the central corneal thickness (CCT)[2]. Any tonometry that relies on one of these properties will therefore yield different readings before and after surgery, even if the “true” IOP is unchanged.

Not all tonometric methods are significantly affected by refractive surgery, however. While a detailed discussion of the theory behind IOP and Tonometry is left for other articles, a brief summary of the major tonometric techniques and their utility after refractive surgery follows. 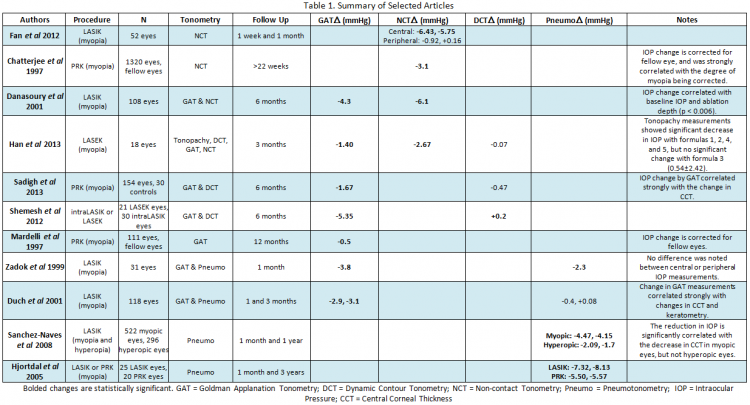 In applanation tonometry, the IOP is estimated from the force required to flatten a certain area of the cornea. Goldman Applanation Tonometry (GAT), the current gold standard, measures the force required to flatten a 3.06 mm area on the cornea by placing a prism directly on the cornea. Non-Contact Tonometry (NCT) or “air-puff” tonometry uses a similar principle, but with a gradually increasing column of air rather than a prism. These techniques assume that the eye is a uniform sphere, however, and were also developed with an “ideal” CCT of 520 micrometers. Since refractive surgery significantly changes both of these assumptions, a change in IOP by GAT and NCT after LASIK and PRK was quickly noticed (Table 1)[3][4][5]. Similarly significant changes in measured IOP have since been documented in LASEK[6].

As expected, the decrease in measured IOP by GAT has been found to be strongly correlated with the ablation depth, change in CCT, and baseline IOP. The change in IOP has been inconsistent from study to study, however, with some studies finding minimal change[4] and others reporting decreases in excess of 5 mmHg[7]. As a result, to date no corrective formulas have been established. While recent studies have suggested that the inaccuracy of applanation tonometry may be ameliorated by measuring the peripheral corneal IOP rather than a central IOP, thereby avoiding the area of greatest biomechanical change[7], other studies have not found any difference between central and peripheral measurements[8]. Due to the established inaccuracy of applanation tonometry after refractive surgery, GAT and NCT measurements should be interpreted with caution after refractive surgery.

Dynamic contour tonometry (DCT) uses a piezoelectric sensor to dynamically detect changes in the intraocular pressure. The tonometer’s tip is designed to cradle the cornea without deforming the surface, which theoretically makes this technique less reliant on corneal thickness or hysteresis. Since the tip is shaped for an ideal cornea, flattening of the cornea during refractive surgery was once thought to affect DCT measurements, but this has not been borne out by studies. Multiple experiments on the use of DCT after LASIK, PRK, and LASEK have found that of all the tonometric methods, DCT is the least affected by refractive surgery[12][6][13] with virtually no significant change in measured IOP noted in the immediate or late post-operative periods. DCT is therefore the recommended technique for measurement of IOP after refractive surgery; however, limited office availability may restrict its routine use in post-refractive care.

After refractive surgery, intraocular pressure should be closely monitored for the complications of ocular hypertension or glaucoma. Due to the procedure-induced changes in corneal thickness, hysteresis, and curvature, however, the measurement of IOP may be falsely low if performed with applanation or indentation tonometry. The change in measured IOP is strongly correlated with the ablation depth and change in central corneal thickness, but as of yet, no corrective formulas have been established. Dynamic contour tonometry is the preferred method for measurement for IOP due to its minimal dependence on corneal characteristics, but may not be widely available. Ophthalmologists should be aware of the issues with IOP measurement after LASIK, PRK, and LASEK, and should closely monitor refractive surgery patients for glaucomatous changes despite a seemingly normal IOP.