Orbital subperiosteal hematomas are rare but incidence and prevalence are unknown at this time, as cross-sectional studies have not been undertaken.

The most common risk factor for the occurrence of an orbital subperiosteal hematoma is a recent trauma. For a non-traumatic orbital subperiosteal hematoma, risk factors include an increase in central venous congestion and a bleeding diathesis. Traumatic OSH, unsurprisingly, has been reported to occur more commonly in young males.[7] Non-traumatic OSH is more commonly seen in females.

The periosteum of the orbit is referred to as the periorbita. It is unique in that it is not tightly affixed to the underlying bone except in specific areas, such as the optic canal, orbital fissures, orbital margins, and at foramina for neurovascular elements crossing the periorbita. As part of normal aging, the periosteum gradually becomes tightly affixed to the underlying orbital bone through the process of calcification. The diploic veins that traverse the potential space between periosteum and orbital bone are susceptible to rupture. Once calcification is complete the periosteum is more tightly adhered to the bone, offering a measure of resistance to the flow of low-pressure venous blood into this potential space. 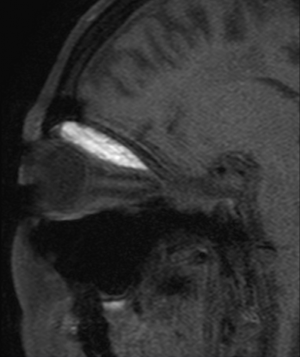 The clinical diagnosis of OSH rests on the combination of physical exam findings and confirmatory imaging. The most common location is a superior and medial orientation of the hematoma involving the orbital plane of the frontal bone. [2][6] Non-contrast CT is the imaging modality of choice due to its capacity to highlight blood between the periosteum and bony orbit. CT imaging has the advantage of distinguishing acute from subacute or hyperacute states on the basis of signal intensity.[9] MRI is inferior due to difficulty in distinguishing boney structures but this modality can highlight such hematomas as hypointense on T1-weighted imaging and hyperintense on T2-weighted imaging. CT and MRI are superior to ultrasound imaging, and orbital plain films have no role in diagnosis. In idiopathic cases of non-traumatic OSH, a pathologic assessment of the evacuated fluid can determine whether the hematoma is of hematologic or neoplastic origin.

It is important to gather a complete history and full ophthalmologic exam on any patient suspected of having an OSH. A history of facial trauma or barotrauma is frequently revealed. When recent trauma has not occurred, a history of valsalva maneuver, bleeding diathesis, anticoagulation therapy, and other systemic diseases should be pursued. Testing of extraocular motility and Hertel exophthalmometry commonly reveals gaze restriction and proptosis. Careful pupillary assessment for evidence of a relative afferent pupillary defect is of utmost importance to rule out optic nerve compression. Similarly, color vision testing is quite useful. Globe dystopia may occur with a sufficiently large hematoma. Intraocular pressure is commonly elevated and should be compared to the contralateral eye.

Signs may include proptosis, extraocular motility restriction, decreased visual acuity, increased intraocular pressure, a relative afferent papillary defect, eyelid edema and ecchymosis, and resistance to retropulsion.[10][11] Deficits are typically unilateral, but there are case reports of bilateral OSH due to attempted suicide and sustained headlock.[12][4]

Differential diagnosis varies, depending on the clinical presentation but may include acute orbital hemorrhage, subperiosteal abscess, mucocele and eosinophilic granuloma, OSH may evolve into a hematic cyst if allowed to remain untreated for a sufficiently long period of time.

Treatment depends on the clinical findings of OSH, specifically whether there is evidence of optic nerve compression. Possible treatments include observation, fine-needle aspiration, corticosteroids, anterior orbitotomy or endoscopic drainage. Prompt intervention is warranted if a relative afferent pupillary defect is present. Surgery[8] to decompress an OSH may be the treatment of choice if a compressive optic neuropathy component is present or in non-traumatic cases, if suspicion of tumor is high. Drain placement may prevent recurrence of the hematoma. Previously, authors have described using FNA for acute resolution of OSH in which neurological signs indicated urgent intervention.[13] Corticosteroids for associated edema, with observation has achieved resolution when a non-invasive, conservative approach was deemed appropriate.[11] Similarly, one case of migraine with emesis-induced OSH demonstrated rapid resolution under close observation without recurrence of OSH after subsequent emesis.[2]