Orbital plasmacytomas is part of a spectrum of hematologic malignancies that can be either primary(Isolated or solitary) or secondary(metastatic). Although rare, primary orbital solitary plasmacytomas(SP) can originate from bone or from soft tissue. Secondary plasmacytomas are manifestations of multiple myeloma, are more common, and have a tendency to be more aggressive [1]

Plasma cells are differentiated B-cells specialized to produce large amounts of immunoglobulin. Plasmacytomas are neoplasias of abnormal plasma cells producing monoclonal immunoglobulin chains. In general, plasmacytomas most frequently arise as bony lesions in the axial skeleton. When solitary and unassociated with multiple myeloma, they are called solitary plasmacytomas of bone (SPB). They fall somewhere in the spectrum between Monoclonal Gammopathy of Undetermined Significance (MGUS) and Multiple Myeloma (MM). Less commonly they can be found in soft tissues, called extramedullary plasmacytomas (EMP).[2] A diagnosis of EMP or SPB can only be made after a systemic work-up, including lymph node assessment, skeletal survey, and bone marrow biopsy is negative. EMPs, SPBs, and secondary plasmacytomas related to multiple myeloma can all occur in the orbit.

Increased age especially males, people of African and middle eastern descent, previous exposure to chemical and irradiation, those with a history of monoclonal gammopathy of undetermined ethology and overt multiple myeloma are at increased risk for development of orbital plasmacytomas.

The histopathologic appearance of plasmacytomas is typical, showing a dense monomorphous plasma cell infiltrate, with some cells being binucleated or multinucleated. The cells tend to be larger than average, about 10-12 microns. Nuclei may show irregular margins, demonstrate infolding and lobulation, or show a diffuse chromatin pattern. The surrounding stroma is typically scant, with delicate thin-walled vessels that have a tendency to bleed.[3] Immunohistochemical staining typically shows monoclonality with CD138 positivity. 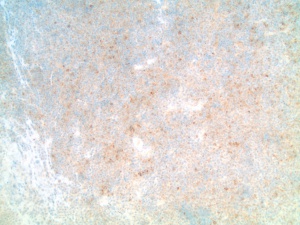 Primary and well-differentiated secondary plasmacytomas cannot be differentiated histologically and must be distinguished clinically with appropriate diagnostic evaluation for systemic involvement.[3] The most common multiple myeloma subtype is IgG, followed by IgA. Similarly, IgG and IgA subtypes are most commonly found in patients with orbital involvement.[4]

Adequate treatment of multiple myeloma may prevent the occurrence of formation of orbital plasmacytomas.

Patients with orbital plasmacytomas most commonly present with proptosis.[4] Ptosis, eyelid swelling, and doubled or blurred vision may be present. Uncommon presentations may include periorbital ecchymosis, orbital hemorrhage, fungating eyelid lesions, orbital cellulitis, or Tolosa Hunt syndrome.[5] [6] [7] [8] [9] [10] Patients also may have systemic manifestations of the multiple myeloma, including: fatigue, infections, pathologic fractures, or bone pain with movement.[3] The typical age of presentation of multiple myeloma is between 40-70 years old. Similarly, the average age of presentation in patients with orbital disease is 56.5 years old, with an equal distribution between men and women.

Patients with primary or secondary orbital plasmacytomas can present similarly with signs that are non-specific and may be seen in any orbital disease process. Best-corrected visual acuity should be recorded. If there is concern for compression of the optic nerve, the presence of a relative afferent pupillary defect should be checked, and color vision testing and automated visual field testing should be considered. Ptosis and proptosis may be present, so mean reflex distances and exophthalmometry should be documented. Patients should be examined for abnormal ocular motility. In patients with multiple myeloma, pathologic changes can be present in both the anterior and posterior segment, so a full ocular exam, including a dilated fundus exam should be performed. Thus all patients should have a complete ophthalmic examination - structural and functional, baseline photographic documentation and regional and systemic assessment as indicated.

Orbital plasmacytomas may present with signs that are non-specific and may be seen in any orbital disease process, including ptosis, proptosis, diplopia, or conjunctival congestion. Blurred vision and increased tearing have also been reported.[3] In patients with secondary plasmacytomas from multiple myeloma ocular findings may include: exudative macular detachment, crystal or copper deposition in the cornea,[11] ciliary body cysts, retinal hemorrhages, and cotton-wool spots.[4]

Patients present with proptosis, ptosis, eyelid swelling, tearing, diplopia or decreased vision. Pain can be present, but is rare. 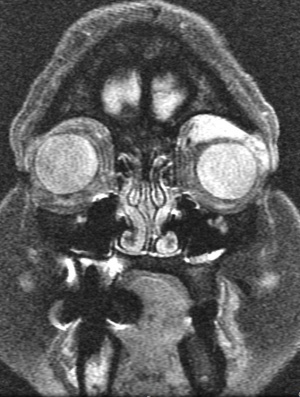 Diagnosis of orbital plasmacytoma can only be made with histopathologic examination of a biopsy of the lesion although classic radiologic features in a patient with known multiple myeloma may be suggestive as well. Additional laboratory tests should be considered once a diagnosis of plasmacytoma has been established. These include tests for anemia, hypoproteinemia, Bence Jones proteinuria, and abnormal proteinemia. Further testing may find hypercalcemia (due to bone destruction), hyperuricemia (resulting from high cell turn over), and elevated ESR. Hypergammaglobulinemia is present in 85% of cases of multiple myeloma. MRI or CT scan should be performed for further evaluation of any suspected orbital lesion. Plasmacytomas are found in the posterior orbit 69% of the time and are extraconal 90% of the time.[4] Secondary plasmacytomas are found in the superotemporal orbit 75% of the time and most commonly originate from bone with local infiltration to the orbit.[4] Bony destruction can be found with these lesions.

External beam radiation is the primary treatment for primary localised plasmacytomas. Sometimes surgical excision and/or debulking or chemotherapy may be necessary. Rarely, EMPs are unresponsive to radiation and chemotherapy, and may require radical surgery like exenteration. Secondary plasmacytomas can be treated with a radiation and/or surgical excision. In conjunction with an oncologist,

underlying multiple myeloma should be treated with chemotherapy and/or bone marrow transplant. Three-drug chemotherapy, described below, is the gold standard for initial treatment (induction chemotherapy), which may precede or occur in conjunction with autologous hematopoietic stem cell transplant. When multiple myeloma recurs or persists, chimeric antigen receptor T-cell therapy (CAR-T therapy) may be considered.

When systemic disease / multiple myeloma is present, three-drug chemotherapy comprised of a proteasome inhibitor, immunomodulatory drug, and steroid is utilized (Table 1). A common example is the bortezomib, lenalidomide, and dexamethasone protocol. Another variation consists of Daratumumab, a monoclonal antibody to CD38, in lieu of a proteasome inhibitor. Chemotherapy should be administered by an oncologist for patients with multiple myeloma. Newer agents for refractory systemic disease include Selexinor, a Selective Inhibitor of Nuclear Export(SINE), Elotuzumab that targets molecule SLAMF7, Daratumumab, a CD 38 target agent, Isaluxumab, Ixazomib, Panobinostat, etc. On the horizon are several new therapeutic options that include Antibody Drug Conjugates (ADCs), T-cell engagers and CAR T-Cell therapies, which are making big inroads into various hematological malignancies including lymphomas.

For refractory or resistant cases of multiple myeloma, chimeric antigen receptor T-cell therapy (CAR-T) may be appropriate. A patient's T cell's are biologically engineered to express chimeric antigen receptors (CARs) which latch onto B-cell maturation antigen on tumor cells. This leads to the release of pro-inflammatory cytokines, causing cytolysis and resultant tumor cell death. CAR-T therapy has been demonstrated in several clinical trials to have an overall response rate between 73 and 81%, and average progression-free survival of 8-12 months. [12]

In certain cases, autologous hematopoietic stem cell transplantation (AHSCT) may also be indicated. Eligibility is determined at time of diagnosis, and is based on several criteria including age < 77 years, absence of liver cirrhosis and class III or IV heart failure, and overall functional status. AHSCT may be part of initial treatment, or deferred until first relapse. A 2020 review of 4300 patients found that the current 5-year survival is 68%, which reflects an upward trend since 1997. Progression-free survival is 73% at 3 years. [13] 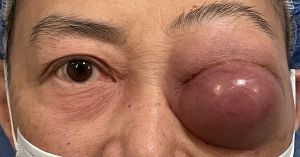 Radiation therapy is the mainstay of treatment, but surgical debulking or complete excision may be an option for some patients

Regular surgical follow-up is recommended. Additionally, patients should be followed at regular intervals for surveillance of tumor recurrence.