The nomenclature regarding the spectrum of diseases can be confusing and include “Optic Disc Cavitary Lesions,” “Excavated Optic Disk anomalies,” and “Optic Nerve Coloboma Spectrum.” In the literature and in this EyeWiki we use the terms “Optic Disc” coloboma and “Optic Nerve” coloboma interchangeably.[1]

Management of optic disc excavations is focused on early detection and visual correction for amblyopia (e.g., the trial of patching or early optimal refraction in optic disc coloboma) and awareness of common associations/complications for proactive management (e.g., neuroimaging in morning glory syndrome for associated basoencepholcele). There is no treatment or prevention for cavitary disc anomalies. [1,2] 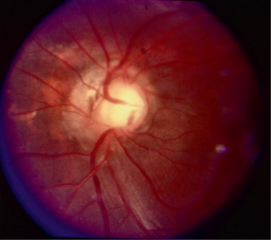 The optic disc coloboma (ODC) is characterized by a bowl shaped excavation often inferiorly with sharp borders. Unlike the morning glory disc, the ODC has no central glial tuft and the disc vasculature is usually normal. ODC can mimic glaucomatous cupping[1,3] but the excavation in ODC is normally decentered inferiorly and is non-progressive. [4] Microphthalmia can be present if the ODC related excavation includes the retina or choroid. Visual acuity in ODC can be difficult to predict from the appearance of the disc alone and can range from mild to severely affected vision. Unilateral or bilateral ODC may occur. [5]

ODC is believed to be the result of incomplete closure of the proximal part of the embryonal fissure during the sixth week of gestation. [6] PAX2 genes, expressed in astrocytic cells, are also expressed in adult retinal cells located on the optic nerve head. Precursor astrocytes are found on the edge of the optic nerve during early development – forming the theory that abnormal astrocyte differentiation or migration during development may play a role in optic nerve coloboma formation. [7]

One study of ODC used swept-source optical coherence tomography (OCT) and described sparse and irregularly oriented scleral fibers and openings of the subarachnoid space just posterior to the bottom of the excavation. [8] 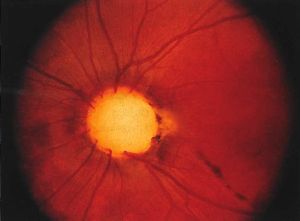 ODC can be associated with a number of genetic disorders (e.g., PAX gene mutations, Walker-Walburg syndrome, Aicardi syndrome). Isolated ODC without systemic abnormalities can be sporadic or familial [9] There is no known racial or sexual predilection in ODC. [3] An important association is papillorenal syndrome.

Optic disc excavations in the papillorenal syndrome commonly lack central retinal vessels. [10, 11, 12] There are usually multiple cilioretinal vessels surrounding the optic disc and arising from its periphery, typically inferotermporally. [10] These can lead to static nonarcuate superonasal field defects with steep contracted isopters with geographic borders.[12] Ocular findings of papillorenal syndrome are commonly mistaken for glaucoma, colobomas, or morning glory anomalies – awareness of the vasculature can help differentiate it from these.[12] Visual acuity is normally unaffected.

This syndrome’s alternative name, “renal-coloboma syndrome,” is somewhat of a misnomer as there is no evidence that failure in the closure of the optic fissure is related to its etiology like it is with optic disc coloboma. [12] The common anomaly found in papillorenal syndrome is optic disc dysplasia. [10,11,12] This finding is thought to be secondary to abnormal angiogenesis, leading to the compromised growth of the retina and choroid. [12] Similarly to optic disc colobomas, papillorenal syndrome is related to mutations of the PAX2 gene. [10,11,12] It’s hypothesized that some PAX2 mutations may lead to abnormal development of the optic stalk resulting in abnormal vascularity on the optic nerve head. [12] One study analyzing PAX2 mutations in 11 families with the syndrome failed to detect PAX2 mutations in 3 of the families; suggesting that genetic heterogeneity (mutations in several other genes responsible for the phenotype) is responsible for some cases. [12]

Peripheral disc excavations that disrupt glial border tissue can lead to cerebrospinal fluid flow and subsequent serous retinal detachment.[10] PAX2 disruption also leads to abnormal mesenchymal differentiation of renal and urinary tracts – this hypodysplasia can lead to renal hypoplasia, hypertension, and failure.[12] Additionally, patients with papillorenal syndrome have been found to have bilateral neurosensory hearing loss, laxity of the ligaments, and sometimes neurological malformations and epilepsy.[10]

The morning glory disc (MGD) is so named because it resembles the morning glory flower. The key ophthalmoscopic features of the MGD are a funnel-shaped excavation with a tuft of glial tissue lying at the center of the excavation and a dramatic and increased retinal vascularity radiating outwards from the periphery of the optic disc. [2] MGD is typically unilateral, and the visual acuity is poor (typically ranging from 20/200 to finger counting).

The exact etiology of the MGD is unclear. Still, the most accepted hypothesis suggests that the pathogenesis may be similar to that of ODC with a defective closure of the embryonic fissure. Some authors believe that MGD and ODC are on the same phenotypic spectrum of colobomatous disc defects. [13, 5] 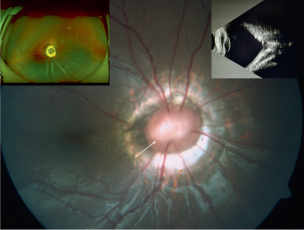 Photographs of Morning Glory Disc - The white arrow points at the tuft of glial tissue at the center. The orange arrow at the bottom of the image points to the relatively straight blood vessels from the optic disc. The left inset photo shows retinal detachment in an eye with morning glory syndrome and the right inset photo is an ultrasound showing the funnel-shaped posterior excavation. Photo credit: Lingam G, Sen AC, Lingam V, Bhende M, Padhi TR, Xinyi S. Ocular coloboma-a comprehensive review for the clinician. Eye (Lond). 2021;35(8):2086-2109. doi:10.1038/s41433-021-01501-5; This work is licensed under a Creative Commons Attribution 4.0 International License. No changes were made to this image.

The classic association of MGD is the basal encephalocele (an outpouching of the meninges). Additional associations with MGD are cerebrovascular anomalies, PHACE (Posterior fossa, Hemangioma, Arterial lesions, Cardiac abnormalities, Eye abnormalities) syndrome, and neurofibromatosis type 2. [4] In contrast to ODC, MGD is more common in females and Caucasians but has rarely been reported in African Americans. [3]

The optic disc usually looks normal in cases of peripapillary staphyloma (PPS). PPS may be unilateral or bilateral with atrophic pigmentary changes. [14] The vascularity of the disc in PPS is normal and differs from the ODC and MGD. [2] Visual acuity can range from markedly reduced to normal depending on the involvement of the macular and those with decreased vision frequently have centrocecal scotomas. [14] Transient vision loss may occur, a recent study suggests that contractions, secondary to either pressure imbalance or muscle contractions, leading to a decrease in vessel density which may be responsible for the transient vision loss. Spontaneous contractile movements of the optic disc region have been seen also in ODC and MGD. [15,16,17]

The PPS demonstrates on ultrasound, OCT, and fundus exam peripapillary atrophy and excavation with thinning o of the retinal layers around the posterior staphyloma and steep slope to the bottom of the disc. [17]

The suggested etiology is that it is due to diminished peripapillary structural support resulting from incomplete differentiation of sclera from posterior neural crest cells at 5 months gestation. Once there is the establishment of normal intraocular pressure the PPS is formed via herniation of unsupported ocular tissues through the defect. [4,18]

Some case reports have described retinal detachment around the optic disc in eyes with PPS. [19,20]

Described first by Pedler in 1961, Pedler Coloboma (PC) has been described as an optic disc with heterotopic adipose tissue and smooth muscle). The PC presents as an abnormally wide scleral canal filled with connective tissue.[18,21] Buckling of the retina can form an epipapillary mass that may be mistaken for an ocular tumor. The PC is described as loose richly vascularized connective tissue located in the region of the physiological optic cup.[18] The optic disc can be seen synchronously pulsating with respiration. [18,22]

PC is believed to result from a failure of maturation in the posterior sclera (secondary to derangement of the optic cup) leading to failed fusion of the peripapillary retina, optic disc, lamina cribrosa, and posterior choroid. These resultant layers are then driven posteriorly through the resultant hiatus. [18]

Cases including these heterotopic mesodermal characteristics described by Willis et al. were all in association with isolated colobomas. [21]

Commonly a large scleral canal will be seen with absence or defective formation of the lamina cribosa. Glial tissue and hyperplastic pigment epithelium is present between the optic nerve and the sclera. [7]

The optic pit (OP) is a crater-like depression of the optic nerve head. [6] OP has no systemic findings and is commonly found on the temporal side of the disc. [6] Depending on the size of the OP and its location there may or may not be visual field loss (e.g., arcuate field defects) but visual acuity is typically not affected. [23]

The etiology of the OP is thought to be similar to ODC and MGD with incomplete closure of the superior edge of the embryonic fissure. [24]

Common complications of the OP are serous retinal detachment and/or retinoschisis in the area of the macular, this is called OP maculopathy. [24]

If the macula is affected with serous detachment in OP then treatment modalities include laser photocoagulation to create a barrier between the disc and the macula so fluid doesn’t enter the macula, pars plana vitrectomy (greater success than photocoagulation), injecting gas tamponade, and/or macular buckle. [25]

Clinicians should recognize the spectrum of optic disc related cavitary disc anomalies and neuroimaging may be necessary of some cases to exclude associated intracranial defects (e.g., basal encephalocoele).

16. Graether JM. Transient amaurosis in one eye with simultaneous dilatation of retinal veins in association with a congenital anomaly of the optic nerve head. Arch Ophthalmology. 1963;70:342-345