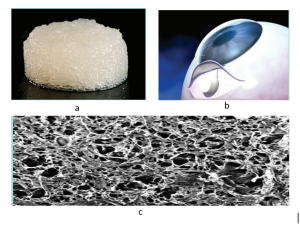 As a key risk factor of glaucoma, intraocular pressure (IOP) is the main target of treatment. Incisional surgeries, such as trabeculectomy and glaucoma drainage device implantation, create an alternative aqueous pathway to physiologic outflow, aiming to decrease IOP. These surgeries are indicated when medical management, or prior less invasive surgical options, provide inadequate control.

With the emergence of adjunct antimetabolites like 5-fluorouracil and mitomycin C (MMC), subconjunctival scarring and its associated failure rate have decreased considerably. However, this benefit is limited by toxicity-related complications, including late-term wound leaks, hypotony, blebitis, avascular blebs, and endophthalmitis.[2, 5]

Ologen is a porous, biodegradable, porcine collagen implant comprised of lyophilized, crosslinked type I atelocollagen (≥ 90%) and glycosaminoglycans (≤ 10%) [2, 5, 6]. The scaffold provides irregular seeding space for fibroblasts, preventing the formation of dense connective tissue. Furthermore, the Ologen implant acts as a reservoir and helps in the mechanical separation of episcleral and conjunctival surfaces, thereby limiting their adhesions [6]. The material degrades within five months, leaving loose connective tissue. [5]

Ologen is currently indicated as an adjunct for trabeculectomy, bleb revisions, primary Xen Gel Stent implantation, Xen Gel Stent revisions, and AGV to reduce postoperative scarring. Patients with a higher risk for postoperative scarring, including those with a history of conjunctival surgery, thick tenon capsule, previous failed trabeculectomy or tube, uveitis, or neovascular glaucoma may also be considered.

Ologen is not reported with any absolute contraindication, but caution may be exercised in patients with hypersensitivity to porcine collagen.

Ologen may be added during any filtering procedure before the conjunctival flap is closed for both limbus and fornix-based approaches. It does not require pre-shaping or fixation. Once properly placed above the scleral flap edge, aqueous humor will absorb into the Ologen implant and tension from the conjunctival surface sutured above will help to shape the material to an optimal contour. The inflated Ologen and conjunctival sutures will both help to control aqueous flow and thereby limit hypotony. It is important to note that since the Ologen sits above the posterior edge of the scleral flap, the scleral suture sites are usually hidden, which may interfere with possible laser suture lysis. Adjustable sutures may be used as an alternative.

Recent studies have shown that trabeculectomy with Ologen has a similar success rate to trabeculectomy with MMC for reducing IOP for 2 years of follow-up [2, 7]. Perez et al. studied 58 patients managed by the same surgeon and surgical procedure to obtain consistent results. With Ologen implants, there were no significant adverse events during 36 months of follow-up. Blebs were also described as normal, with posterior diffusion in 88% of patients. Further, Ologen implantation reduced operative time and postoperative management by not requiring lysis of the scleral flap sutures. The study concluded that Ologen serves as the better agent, particularly for poor MMC candidates such as pregnant women or previous blebitis patients in the contralateral eye following usage of MMC [7].

Navero‐Rodríguez et al. observed slightly lower IOP with Ologen implants than without Ologen in association with Xen Gel Stent implantation with a mean IOP reduction post-surgery of 24.5% with Ologen and 19.7% without Ologen [8]. Complications such as hypotony, implant extrusion, bleb formation, corneal edema, and tenon cyst were noted in this report. However, complication rates were lower with Ologen compared to those of Xen alone.

Several studies have investigated the clinical advantages of Ologen in trabeculectomy, but the literature on Ologen with AGV is limited.

Sastre-Ibáñez et al. determined the safety and efficacy of Ologen with AGV through a randomized trial of 58 patients that were followed for one year [11]. Conventional AGV surgery (without Ologen or antifibrotic usage) was done in 31 eyes, and another group of 27 eyes Ologen implants were placed over the AGV plate. The study observed no differences in efficacy between the two groups and concluded there was no benefit of Ologen with AGV.

Jacobson et al. investigated the impact of AGV with and without Ologen in a pediatric population between 2012 to 2020 [12]. The study compared 16 eyes with standalone AGV to 6 eyes with AGV with Ologen (OAGV). The study observed a 100% success rate in the OAGV group vs. 31% in the standalone AGV group. Success was defined as an IOP of 5-20 mm Hg without medications and additional surgeries. The desired postoperative IOP was maintained during a one-year follow-up in the OAGV group. In conclusion, Ologen raised the success rate of AGV in childhood glaucoma. In addition, Ologen reduced the hypertensive period and decreased postoperative medication burden. A long follow-up with more eyes is needed for a better understanding of the effectiveness of OAGV.

The Ologen implant is an alternative to conventional antifibrotic agents used as adjuncts to conjunctival-based glaucoma filtering surgeries. The implant has an excellent safety profile and efficacy data to date is encouraging.