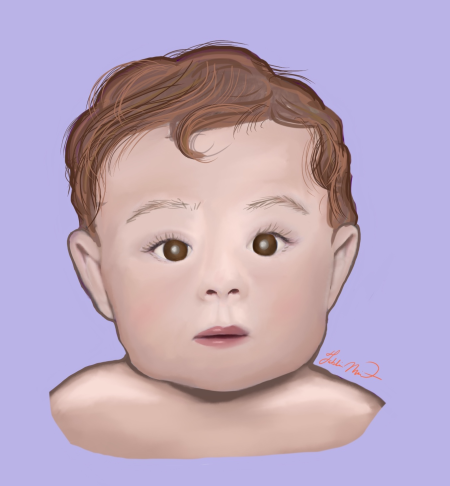 Illustration of bilateral pediatric cataracts by Fabliha A. Mukit, MD using an iPad and the Procreate app.

Galactokinase deficiency (Type II Galactosemia) is caused by an inborn error of metabolism that affects the body’s ability to metabolize galactose. Newborn screening is important because newborns are exposed to high concentrations of galactose in breast milk and other dairy containing formulas.   Galactokinase deficiency is inherited in an autosomal recessive trait pattern and results in the mutation of the galactokinase enzyme.  Dietary modifications can help to limit the progression of the disease which makes newborn screening particularly important.

An understanding of the Leloir pathway of galactose metabolism is necessary to understand why a galactokinase deficiency can cause several associated complications. There are 3 major cytosolic enzymes in this pathway that are associated with developing a form of hypergalactosemia. These enzymes are: 1) galactokinase (GALK), 2) galactose-1-phosphate uridyltransferase (GALT) and 3) UDP-galactose 4’-epimerase (GALE).

When the Leloir pathway gets blocked the minor pathways become significant.  In patients that have a mutation in the galactokinase enzyme, galactose is readily available to be converted to galactitol by aldose reductase.  Galactitol is osmotically active and can accumulate in the lens fiber cells. Accumulation of galactitol in the lens causes swelling, cell lysis and eventually cataracts. [2] In patients with suspected galactokinase deficiency, infantile cataracts can be avoided through eliminating galactose from their diet. 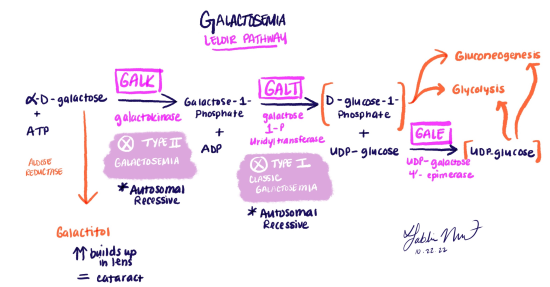 Leloir Pathway illustration by Fabliha A. Mukit, MD using an iPad and the Procreate app.

Galactosemia type II can be difficult to recognize in the early stages of life due to the lack of dramatic symptomatic manifestations that present. The most common ophthalmic manifestation of the disease is the development of bilateral nuclear sclerosis cataracts which can sometimes go unrecognized. In cases of bilateral cataracts that go unrecognized, the symptoms manifest as a nystagmus, failure to develop social smile, or diminished ability to track objects.[1] It has also been seen that heterozygous carriers of galactokinase deficiency are at increased risk of pre-senile cataracts (development of lens opacification earlier than 40 years of age).

Outside of ophthalmic symptoms, there are other systemic manifestations of the disease. Hyperbilirubinemia is one of the more common symptoms which presents in the neonatal period. Another clinical feature that has been frequently noted is pseudotumor cerebri. Pseudotumor cerebri (also known as Idiopathic Intracranial Hypertension) can be due to increased cerebrospinal fluid from osmotic pressure caused by the increased galactitol concentration.  Long term follow-up showed that these patients are at risk of dyspraxia, mental retardation, motor delays, and hypergonadotropic hypogonadism.[1]

Classic galactosemia (Type I), an autosomal recessive disorder resulting from GALT (galactose-1-phosphate-uridyltransferase) deficiency, is the more severe form of Galactosemia. Newborn screening tests are designed to detect classical galactosemia. If the initial screening is positive, then secondary diagnostic tests for hypergalactosemia and galactosuria are ordered.[1]

Newborns with GALT deficiency can suffer from severe comorbidities such as feeding problems, failure to thrive, hepatocellular damage, E. coli sepsis, and bleeding.[1] If the patient is diagnosed early and begins dietary restrictions within ten days of life, complications of liver failure, sepsis, and neonatal death are preventable.

Duarte galactosemia is an autosomal recessive condition resulting from partial impairment of galactose-1-phosphate uridyltransferase (GALT). It is a less severe form than classic galactosemia and presents with milder symptoms. An important factor masking the diagnosis is the lack of hypergalactosemia found in patients with the disease. The condition can still be prevented if treated in a timely manner, however, it can be difficult to diagnose.[1]

Epimerase deficiency galactosemia should be considered as a diagnosis in patients with failure to thrive, liver disease, and elevated erythrocyte galactose-1-phosphate concentrations with normal GAL enzyme activity.[1] Diagnosis is achieved when there is a detection of reduced GALE enzyme activity.

Early dietary modifications are essential to the patient having more favorable outcomes.  When treatment is started within two to three weeks of age, reversal of cataract formation can occur.[1] It is recommended that patients have strict galactose restriction with calcium supplementation to reduce metabolite levels.[6] Soy based formula is recommended for infants with identified galactokinase deficiencies.

Long-term follow-ups with the patients primary care provider are necessary to monitor their measurements of galactose, its derivative metabolites, and measurements of galactitol in red blood cells.[1] Routine ophthalmologic evaluation by slit lamp examination are also necessary to monitor for cataract formation.  If a patient develops a cataract that is dense and mature, surgical interventions will be required with or without intraocular lens implant.