Over time, the skin's elastic nature and muscle's composition deteriorates, resulting in forehead descent.[1] [2] Correction of these displaced tissues with cosmetic surgery allows patients to improve their aesthetic appearance. This can be done by aging patients, as well as those with physiologically low brows. In deciding whether to pursue aesthetic surgery, important factors for phsyicians and patients to consider are the invasiveness and risks of the procedure, as well as scar appearance. In the case of brow descent, endoscopic approach to brow lifting allows skin incisions to be hidden within the patient’s hairline, allowing elevation of the entirety of the drooping forehead, in addition to reducing the muscle action of the corrugator supercilii. This is all achieved without the more objectionable associations of the more open approaches, such as a conspicuous scar, as well as prolonged recovery time and post-operative numbness.[3] Because of these advantages, endoscopic brow lifting is one of the most popular choices for surgical correction of the aging forehead.[4] 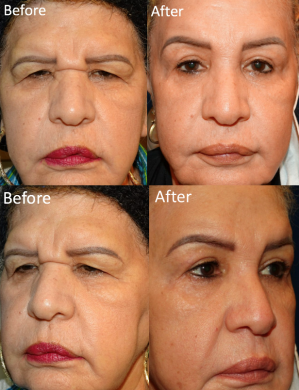 Figure 1: Before and after photos of a patient who received an endoscopic brow lift for the correction of brow ptosis. Photo credit: Anne Barmettler, MD

The brow lift has evolved over the past century to achieve better outcomes and quicker recoveries. [5] [6] Dr. Passot is credited with popularizing the direct brow lift procedure in the 1930’s, when he described the technique of removing small, symmetrical areas of skin superior to each brow.[7] The skin is then reapproximated, elevating the brow. Although effective, this procedure leads to a visible scar above the brow and also does not address forehead ptosis in the glabellar region.[8] An adaptation of this procedure, the mid-forehead brow lift, places the incision in a prominent mid-forehead wrinkle.[9] The procedural techniques of the brow lift were further revolutionized with the advent of the coronal brow lift. The coronal lift consists of either a subperiosteal or subgaleal dissection of forehead tissue from an ear-to-ear incision line all the way down to the level of the orbital rim. Although the coronal brow lift has the ability to achieve good results, including the glabellar region, it is limited by its relative invasiveness and longer recovery times. The trichophytic brow lift developed in the 1980’s, where the incision is just anterior to the hairline, allowed shortening of the forehead. However, the visibility of the scar along the hairline can sometimes be problematic. This led to the use of endoscopic technology for brow lifting in the 1990’s by Dr. Vasconez.[10]

Candidates for endoscopic brow lifts have a physiologic or age-related related brow ptosis and are aesthetically inclined. For patients with severe brow ptosis, who wish to focus solely on functional recovery of peripheral vision and do not mind a visible scar, are likely a better direct brow lift candidate.

Because of its immediate proximity to the orbital region, a ptotic brow must be on the differential for any patient with a perceived excess of upper eyelid skin.[11] If an aging brow is contributing to the appearance of a drooping eyelid, then the surgical outcomes of an isolated blepharoplasty will likely not meet the patient’s expectations. Adequate preoperative discussions on realistic goals and excellent patient selection are key to successful outcomes.

Another element to be cognizant of during the examination is the presence of dry eye, lagophthalmos, or exposure keratopathy, as an elevation of the brow could exacerbate these pathological states.[11] Finally, careful examination of the patient’s hairline is important in evaluation of surgical candidacy. Although there is less visible scar formation with the endoscopic approach to brow lifting, incisions may not be as well concealed if a patient is either balding or has a receding hairline. Some patients may also have a high forehead and wish to have this shortened. If this is the case, a trichophytic or pre-trichial approach may be indicated. Proper pre-operative goal discussion and counseling is crucial.

In performing any sort of cosmetic surgery, it is important to evaluate patient goals and to ensure that appropriate patient selection occurs. In addition to determining whether a patient’s physical exam makes them a fitting candidate, it is crucial to assess for realistic expectations and motivations for undergoing the brow lift.

In an endoscopic brow lift, a series of preoperative skin markings are made posterior to the hairline. A surgeon will typically make one central marking superior to the glabella, two paracentral markings superior to the lateral brow, and two lateral markings in the regions of the right and left temporal crescents. It is also essential to mark the 1-2 cm encompassing region of the supraorbital notch in order to consider and protect the supraorbital and supratrochlear nerves during the subperiosteal dissection.[11] 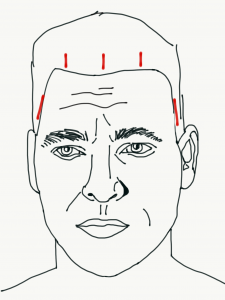 In the areas identified by the central and paracentral markings, incisions are made using a 15 blade down to the bone.[13] The tissue is then dissected inferiorly to the orbital rim using a straight, spatulated raspatory in the subperiosteal plane. The endoscope is used to visualize periosteal release and location of the supraorbital nerve. Blunt tipped scissors should be used in a spreading manner to carefully dissect in the marked location of the supraorbital and supratrochlear nerves. Periosteal attachments to the orbital rim are then released, followed by corrugator and procerus muscles release to address glabellar rhytids. The temporal incisions are first made down to the superficial temporalis fascia in order to avoid damage of the temporal branch of the facial nerve. Dissection is then achieved with a spatulated raspatory in the superficial temporal space to the orbital rim. Excellent release of periosteal attachments to the orbital rim are crucial. The tissue of the forehead and scalp are then mobilized superiorly to arrive at adequate elevation of the brow regions. Following the lift, the tissue is commonly secured and fixed to the bone with either anchored sutures or dissolvable implants, such as Endotines. Skin closure can be done with staples or a suture, such as a 5-0 nylon.

Post-operative care varies and may include an overnight compressive forehead bandage. Some surgeons recommend oral antibiotics for infection prophylaxis, as well as oral methylprednisolone to address post-operative edema. Most recommend follow up for their first post-operative visit after about seven to eleven days to remove staples.