Demodex infestation of the eyelids

Demodex infestation is a commonly overlooked cause of ocular inflammation. Though true pathogenicity in humans is controversial, Demodex has been linked to many ocular conditions including blepharitis, conjunctivitis, chalazia, recurrent trichiasis, rosacea, and keratitis.[1] [2] [3] [4]

Risk factors include increasing age and individuals who care for the elderly.[1]

As previously stated, Demodex is acquired shortly after birth and their numbers increase during puberty as sebaceous glands proliferate. The prevalence continues to increase with age, with 13% of 3-15 year olds infested, 69% of 31-50 year olds, 84% by age 60, and 100% after 70 years of age.[1]

Demodex mites are readily transferred via skin-to-skin contact.[6] Demodex can cause problems through the following mechanisms:

Good lid hygiene with soaks and scrubs can be helpful. Infestations with Demodex are more common in patients who are immunocompromised. In patients with HIV, eruptions generally occur when CD4 count drops below 150/mm3.[11]

As Demodex mites are implicated in a variety of diseases, patients may present with a variety of signs and symptoms. Clinical suspicion for Demodex as the causal etiology must therefore be high. Since these mites can be seen in normal skin, the clinical presentation must coordinate with any physical exam findings or pathologic diagnoses.

Patients with symptomatic Demodex infestation can present with several corneal and external diseases resulting in symptoms including itching, burning, foreign body sensation, blurry vision, and pain. As these symptoms are common in many disorders, additional evidence in conjunction with strong clinical suspicion is necessary to establish the diagnosis. Demodex infestation may be suspected as the cause if a patient reports recurrence of these symptoms that are refractory to conventional treatments.[6] 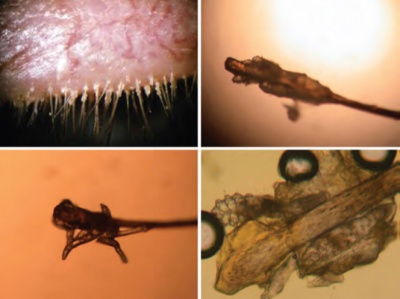 There is often poor correlation between symptoms and objective signs indicating Demodex infestation.[8] Slit-lamp exam can be used to detect cylindrical dandruff at the root of the lashes, a pathognomonic sign for Demodex [see figure].[6][9] Otherwise, exam findings are typical for the diseases listed above and are therefore non-specific for Demodex. 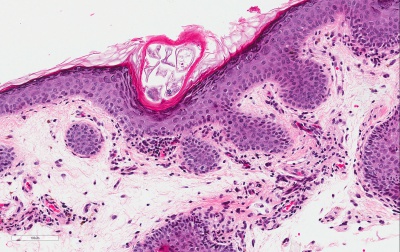 Sampling of lashes can allow for detection of mites microscopically. This can be done by epilating lashes, placing them on a glass slide, adding fluorescein on top, covering with a cover slip, and examining them under the microscope for the presence of mites.[12]

In biopsy samples containing skin, multiple sectioned Demodex mites can be seen filling the space occupied by the follicle. There are typically chronic inflammatory cells surrounding the follicles. [see figure]

The differential diagnosis of Demodex infestation depends on the particular manifestation. Given that Demodex is associated with a variety of pathologies, the differential can include infectious/inflammatory causes of conjunctivitis, keratitis, keratoconjunctivitis, blepharitis, dry eye syndrome, chalazia, and trichiasis. It is also important to distinguish Demodex from phthiriasis palpebrum (infestation with pubic lice) when examining dandruff of the lashes.[13]

As previously stated, detection of Demodex without clinical symptoms does not warrant treatment. The treatment of clinically significant Demodex infestation generally involves the use of tea tree oil and its derivatives.

Eradication of Demodex infestation is accomplished using daily lid scrubs with tea tree oil (TTO). 50% TTO was initially used as the therapeutic dosing and was shown to reduce symptoms and inflammation of the cornea, conjunctiva, and lid margin.[14] This dosing, however, caused irritation in some patients. Thus, the active ingredient of TTO, terpinen-4-ol (T4O), was isolated. T4O was more potent at equivalent doses of TTO, thus allowing for effective treatment at lower concentrations.[15]

The discovery of T4O allowed for the development of Cliradex®. This product is a facial wipe containing T4O that patients use daily to treat the various manifestations of Demodex infestation. Treatment regimen is recommended to last at least 6 weeks in order to cover the patient through two life cycles of Demodex.[6]

Additionally, an in-office treatment has been developed called Cliradex® Complete. This involves an initial treatment by applying a stronger concentration of T4O to the lid margin followed by thorough cleaning of the root of the lashes and removal of debris. The patient then follows this initial therapy with Cliradex® wipes at home[6]

Additional therapies that have been used for Demodex-associated skin disease include topical sulfur products, permethrin, and ivermectin. Facial eruptions have also been treated with oral metronidazole and with dilute topical camphor oil.[1]