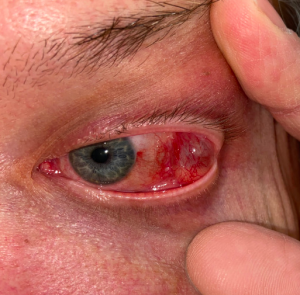 Worldwide, trachoma is thought to be the most common etiology. Dacryops are considered quite uncommon in other parts of the world; one group reported only 10 patients presenting to their practice in an 18 year period.[1] Dacryops has also been reported in the context of ocular cicatricial pemphigoid[2] and in cases of chemical injury[3]. However, some cases are idiopathic.

Although these lesions have been known to medical science for quite some time, disagreement persists regarding their etiology. Experiments performed around the turn of the last century demonstrated that occlusion of lacrimal system does not result in formation of dacryops. Instead, atrophy of the occluded lacrimal system is seen.[4][5] Furthermore, pressure within the lacrimal system is physiologically low.[5]Thus, it has been hypothesized that another mechanism must be at work. As high levels of secretory IgA have been found in fluid within these cysts[4], and strong immunohstochemical staining of cyst wall epithelium has been reported[6], hypersecretion of IgA into the cyst lumen with resultant osmotic retention of fluid and expansion of the cyst has been proposed as an important step in pathogenesis. Others have proposed that damage to the walls of lacrimal ducts, perhaps secondary to trauma or inflammatory conditions, could predispose them to dilation. The hypothesis that loss of ductal myoepithelium plays a role in pathogenesis, however, is no longer tenable, as imunohistochemical studies have recently shown that the normal lacrimal duct system does not posess a myoepithelial layer.[7]

Diagnosis may be made on clinical grounds alone. Diagnostic aspiration, ultrasound, and CT have also been used[5] but are not mandatory[1].

Patients may complain of a visible mass or swelling of the eyelid. These lesions classically enlarge slowly; however, patients may report a lesion the size of which varies over time, for example enlarging during lacrimation. Aching, irritation, and tenderness have been reported, which are usually mild.

Blepharochalasis or a conjunctival mass can be seen, depending on the anatomical location of the cyst. Ptosis, proptosis, or hypoglobus may result if the cyst is large.[5]

On exam, the cyst can often be directly visualized within the fornix, typically revealing a rubbery, mobile nodule. Size may vary and tenderness may be absent or mild. These lesions will transilluminate, and many sources describe the cysts as having a bluish hue. Dacryops of Wolfring glands, however, is immobile.[4]Most lesions are unilateral[7] Seidel test may be positive near the cyst and has been interpreted as representing preserved, patent lacrimal ductules.[1]

Histologically these lesions are characterized by a fluid-filled cyst, which may be collapsed, surrounded by an epithelial layer; different morphologies, including a single or double layer of cuboidal cells, or a stratified squamous epithelium, with goblet cells, have been reported. Cellular atypia is not seen. Essentially normal lacrimal gland architecture is seen in close proximity. They can be surrounded by a chronic inflammatory infiltrate which is not severe. The most recent extensive histopathological examination, by Jakobiec et al.,[7], described visible connections of the cystic space with dilated secretory ducts of the lacrimal gland. True apocrine differentiation of the epithelium, although described in prior publications, was not confirmed in this report, and the epithelium was negative for GCDFP-15, an immunohistochemical marker of apocrine differentiation.

Other laboratory testing is not specifically indicated.

This lesion is considered benign, although there is one case report of transformation into squamous cell carcinoma in a patient with a history of multiple cutaneous malignancies.[8] Surgical excision or marsupialization is indicated in patients with symptoms or poor cosmesis[5]. A transconjunctival approach is typically used. Some sources recommend Schirmer's testing and management with marsupialization in patients with low tear production, to avoid exacerbation of aqueous tear deficiency;[5]others have managed these patients non-operatively.[1] In patients with ocular cicatricial pemphigoid, excision through a skin incision has been used to avoid manipulation of compromised conjunctiva.[2] Argon laser photocoagulation has also been described.[9]

Aspiration or drainage is not appropriate as definitive treatment, as it results in rapid recurrence, presumably due to proximity of, or a persistent direct anatomical connection to, the lacrimal gland with its prodigious secretory ability.

Cysts may fistulize or become infected (which can sometimes be seen in the superotemporal fornix as a cyst with an air-fluid level).

Recurrence of the lesion after excision has been described, thought to be a result of incomplete removal.[1] Risks of injury and scarring of the lacrimal gland ductules may also occur.