Cherry red spot is a significant fundoscopic finding in the macula, observed in central retinal artery occlusion (CRAO) and a variety of lipid storage disorders. 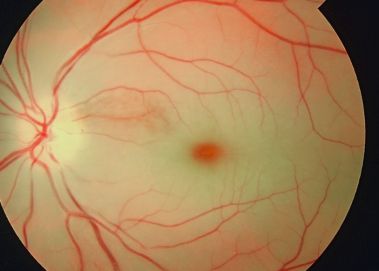 Cherry-red spot (CRS) at the macula is a clinically significant sign observed on fundus examination in a variety of pathological conditions[2], including retinal infarction, retinal ischemia. as well as a variety of lysosomal storage disorders.[3] The term refers to the appearance of a red-tinted region at the center of the macula surrounded by retinal opacification[3], and it consists a clinical sign usually present within the context of thickening and loss of transparency in the posterior pole of the retina.[4] The fovea retains relative transparency as it is the thinnest part of the retina and is devoid of ganglion cells. The fovea receives its blood supply from the choroid, which is supplied by the long and short posterior ciliary arteries.[5] The appearance of a cherry red spot can result from retinal edema most commonly due to central retinal artery occlusion or traumatic retinal ischemia, which cause the perimacular tissue of the retina to appear translucent, while the fovea maintains its normal color.[6][4] In the case of lipid storage diseases, the lipids are stored in the ganglion cell layer of the retina, giving the retina a white appearance. As ganglion cells are absent at the foveola, this area retains relative transparency and contrasts with the surrounding retina.[4] Cherry-red spot is an important fundoscopic sign, and when found with key clinical features and a good history, often guides one to the diagnosis of the disease.[2] It should be noted that as a condition resolves or evolves over the course of time, the appearance of a cherry-red spot diminishes and may not be present; therefore, absence of a cherry red spot does not indicate that a disease is not present.[3]

The term “cherry-red spot” was first introduced by American neurologist Bernard Sachs in 1887, when describing the fundus appearance of a child with "amaurotic familial idiocy" in his publication on “arrested development with special reference to its cortical pathology”. [6] The patient was confirmed upon neuropathologic examination to have lipid storage in the brain. [7] Bernard Sachs acknowledged that his patient had also been examined by ophthalmologist Herman Joseph Knapp, who practiced in both New York and Berlin, and described the striking retinal findings at an ophthalmology meeting in Heidelberg and used the term “cherry red color” to describe the fovea.[6] . Knapp had initially believed that the cherry red spot was a benign fundoscopic finding, but later on realized its grave implications. [6]

The causes of cherry-red spot in the macula can be categorized into 6 groups, according to etiological factors: 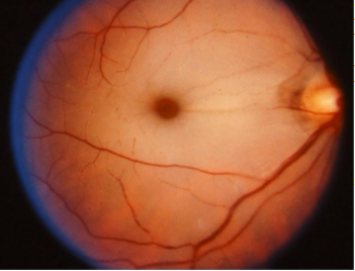 Prominent cherry-red spot in a patients with Tay-Sachs disease.[11]

Major risk factors of developing cherry-red spot at the macula due to CRAO include a variety of predisposing clinical conditions that can be divided into non-arteritic and arteritic.

The macula is histologically characterized by an area consisting of more than one layer of ganglion cell layers, and the ganglion cell layer is thick at the macula. In disease entities causing loss of transparency (whitening or opacification) of the inner retina, the reddish color of the vascular choroid and pigmentation of retinal pigment epithelium (RPE) is not visible through the opacified retina. However, the foveola is devoid of the inner retinal layer. The retinal layers present at the foveola are (from vitreal to the sclera)- internal limiting membrane, outer nuclear layer, external limiting membrane, photoreceptor layer, and RPE. Inner retinal layers are absent in mature foveola. The vascular supply of the fovea is from the choroid and is not affected with occlusion of retinal vessels. Thus, the foveola, the thinnest part of the central retina, does not lose its transparency during inner retinal ischemia.

Thus, when there is inner retinal opacification, the reddish color of the vascular choroid and the RPE remain visible through the foveola, which is surrounded by an area of the white/opacified retina, giving rise to the typical cherry-red spot. The size of the cherry-red spot depends on the size of the foveola. There are several causes for opacification of the inner layers of the retina, including from deposition of compounds, as in storage diseases, or ischemia from vascular compromise involving the retina but not the underlying choroidal circulation. 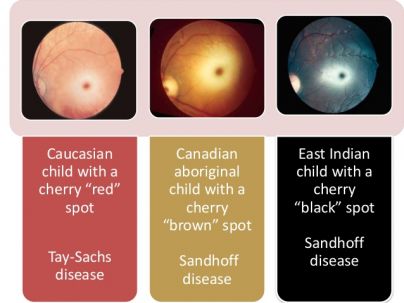 Variants of the "cherry-red spot' sign in different ethnicities.

As the color of the choroid and RPE varies with racial variation, the color of the foveola may vary according to race. A true cherry-red spot presents in Caucasian individuals. Variations of the red-cherry spot are observed in non-Caucasian patients; the color of foveola was brown, a cherry-brown spot has been described in a Canadian aboriginal child with Sandhoff disease, due to the brown color of the fovea, whereas a cherry-black spot was reported in a patient of East Indian descent with Sandhoff disease., as a result of the black fovea color. Thus, an alternate term of 'perifoveal white patch' has been suggested. In cases of ophthalmic artery occlusion, there is a compromise to the vascular supply to retina, choroid, and optic nerve head circulation. There is retinal opacification without a cherry-red spot and severe vision loss with loss of light perception or accurate projection of rays.

Opacification of the inner retina can occur as a result of retinal ischemia due to occlusion of the central retinal artery . The retinal whitening is typically most prominent in the posterior pole, and the opaque retina obscures the details of the choroidal vessels. The whitening of the retina becomes less prominent a little peripheral to the arcades, which may be related to the reduced inner retinal thickness at the peripheral retina. There is a cessation of axoplasmic transport and then the opacification of both the ganglion cell and the nerve fiber layer in a CRAO.

Prevention for retinal ischemia can include measures to reduce cardio or cerebrovascular diseases.

Ruling out serious life-threatening or sight-threatening conditions is of paramount importance in a patient with a cherry-red spot at the macula, thus requiring a thorough evaluation and management of such patients.[3] Acute loss of vision with a cherry red spot should raises concern of risk for a stroke occurring. Depending on the institution, initiating consultation with a stroke team or neurology is important. Also important is assessing blood pressure. 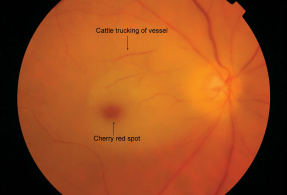 Color fundus photograph of the right eye showing acute CRAO with cherry-red spot and cattle trucking of the arterioles.[16]

Fundoscopic features that present along with cherry-red spot at the macula include:

A macular hemorrhage or hole, with resulting enhanced red contrast relative to the surrounding retina, may be confused with a cherry red spot.[6]

In many institutions, the presence of a CRAO warrants an urgent neurology consultation for a possible stroke[26].

Cherry-red spot at the macula is a clinically significant fundoscopic finding that usually denotes an ocular emergency especially when observed in a patient who presents with sudden, painless, vision loss of one eye . The general management of a cherry-red spot sign is determined by the underlying pathological condition that causes the appearance of the fundoscopic finding.

In the acute setting of CRAO, treatment options are directed at resolving the CRAO and circulation, and thus maximizing visual outcome. Experi­mental studies suggest no detectable retinal damage in primate models with CRAO if retinal blood flow is restored within 90 minutes. Subsequent partial recovery may be possible if ischemia is reversed within 240 minutes. However, occlusions lasting longer than 240 min­utes produce irreversible damage. The treatment approach is attempted within the first 24 hours.

For various storage diseases, the management requires a team of various specialties. Generalized pearls for the management of such patients include avoiding/reducing intake of specific molecules that lead to accumulation within ganglion cells, enzyme replacement therapy, and symptomatic management.

(only in cases of arteritic CRAO)

Neovascularization is a complication that may occur in patients with CRAO with an incidence that varies from 3.0-18.8%. It may involve the retina, iris, or iridocorneal angle. Moreover, the detection of neovascularization following CRAO has ranged from as early as the day of presentation to 2 years after the CRAO diagnosis. The associa­tion of CRAO and the development of neovascular glaucoma is thought to occur in about 5%; however, a prospective study established a tem­poral relationship between CRAO and neovascular glaucoma in 15% of cases. These results are corroborated by studies supporting the occurrence around 8 weeks from diagnosis to clinically evident neovascularization.[9] However, a prospective study of 232 eyes found neovascularization in 2.5% of cases, and the authors found that there was no causal relationship.[27]

With frequent visits, many cases of neovascularization can be managed early with treatments such as panretinal photocoagulation to decrease retinal oxygen demand and off-label intravitreal bevacizumab. Since neovascularization can occur early, regular follow-up appointments should be required, especially within the first 4 months.[27]

The initial management approach described above may provide some benefit; however, there is no clear evidence at this point that these measures result in improvement of the patient's final visual acuity and have the best chance when performed shortly after the diagnosis of CRAO. Vision loss is permanent due to infarct of inner retina, as irreversible damage to sensory retina develops only after 90-100 minutes of complete CRAO. Vision is 20/400 or worse in 66% of cases.