Ophthalmoscopy is a routine exam done by ophthalmologists to examine the inside of the back of the eye, also known as the fundus or the posterior segment. Although there are several types of ophthalmoscopy, we will focus on Binocular Indirect Ophthalmoscopy (BIO) in this article.  BIO is one of the ways used to view the retina, with a wide field of the retina and stereoscopic view.  BIO also allows dynamic observation of the retina by moving the BIO device, lens, and applying scleral depression. The process is “indirect” because the fundus is viewed through a hand held condensing lens.

The earliest ideas about ophthalmoscopy dates back to 1846 when Dr. William Cumming, a front runner in the field of ophthalmology, wrote that “every eye could be made luminous if the axis from a source of illumination directed towards a person's eye and the line of vision of the observer were coincident”. Five years later, in 1851, Hermann von Helmholtz designed the first direct ophthalmoscope for medical use. A year later Christian Ruete made modifications to Helmholtz’s design by implementing a concave focusing mirror, and thereby introduced indirect ophthalmoscopy to allow for a stereoscopic and wider view of the fundus. Dr. Charles Louis Schepens (1912-2006) improved on the original design in 1945 by adding a second lens for the other eye (binocular indirect ophthalmoscope). This allowed him to see an inverted and reversed view of the fundus, with a relatively large field of vision.

The BIO device consists of a headband, binocular lens with mirrors, and a light source (see diagram). The examiner  wears the device by positioning the headband around his or her head so that the binocular lenses sit directly in front of their eyes. Mirrors in the device split the light reflecting back toward the examiner so the image may be presented to each of the examiner’s eyes. The light is between the doctor's eyes just above the bridge of their nose.

During use, a hand held “condensing lens” is held by the examiner, a few inches above the patient’s eye.  The purpose of this lens is to “gather” the light rays coming out of the patient’s eyes which are divergent due to the power of the cornea.  This lens presents a real horizontally and vertically inverted image in front of the hand held condensing lens (on the side towards the examiner). The power of the condensing  lens determines three things: viewing distance, magnification, and field of view. Typical lenses used have a range of:+14D to +30D (D=diopter).  As the lens dioptric power increases magnification decreases and field of vision increases. Low power(i.e. +14D to +18D) lenses offer strong magnification but a relatively smaller field of view, and below about +20D, the lens needs to be held further from the patient's eye, which may be difficult for some examiners. There are many different types of lenses that doctors also use. Aspheric lenses are general multi purpose lenses that are used when not looking for anything in specific.

The magnification of a specific BIO lens is crudely determined by 60/the power of lens. Thus, a +20D lens would have a magnification of 60/20= 3X. 20D lens is the most commonly used lens for BIO in adults. For examination of retinopathy of prematurity patients, 28D lens is preferred.

Image taken from the lens catalogue at volk.com

BIO devices  may include filters. A yellow filter offers protection to the user because of the decreased intensity of light entering the patient's eye and may even offer protection to the patient’s retina or provide comfort to the patient. Red-Free filters can be used to view blood, membranes, new vessels, retinal nerve fiber layer defects and highlights whitish portions of the retina, if present.. Cobalt Blue filters can be used to more clearly view the eye after a fluorescein angiography, and may be used to do fluorescein angioscopy (BIO of the peripheral retina with blue filter to look for peripheral new vessels after patient has been intravenouslu given sodium fluorescein). 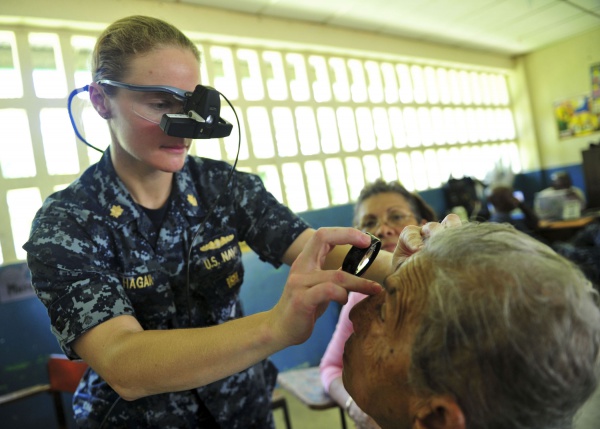 Ideally the patient should lie supine during BIO, though BIO in sitting position can also be done

The examiner looks through the pupil to view the posterior segment of the eye. However, the undilated pupil restricts the view field of view dramatically, specifically the bright light of BIO usually makes the pupil very small. Doctors will generally decide to administer dilating drops. Mydriatics are dropped into the eye. Mydriatics come in two forms: parasympathetic antagonists such as Tropicamide, or sympathetic agonists such as Phenylephrine. Parasympathetic antagonists are used to paralyze the iris sphincter muscle while sympathetic agonists are used to stimulate the iris dilator muscle. Through this enlarged pupil the examiner is able to view the center and periphery of the retina.

A technique commonly used with BIO is scleral depression. This complements the dynamic viewing of the retina and vitreous.  The forward and inward curvature of the globe in the anterior portion of the eye obscures and prevents far peripheral viewing Therefore, scleral depression (or special contact lenses such at Goldman 3-Mirror contact lens) is needed to indent the scleral and bring the peripheral retina into view.. To depress the sclera, a scleral depressor is placed against the sclera (either on the globe or on the eyelid overlying the globe) and gentle firm pressure is applied.  This pushes the sclera and the retina into the examiner’s field of view during the BIO exam.