Axenfeld-Rieger syndrome(ARS) refers to an autosomal dominant genetic condition characterized by anterior segment dysgenesis and systemic abnormalities. In 1920, Axenfeld characterized the anomaly which bears his name when he described posterior embryotoxon and iris strands adherent to the anteriorly displaced Schwalbe’s line.[1](Figure 1)Posterior embryotoxon is a clinical and histologic term referring to displacement of Schwalbe’s line anterior to the limbus in the cornea.  Rieger described patients with congenital iris abnormalities including iris hypoplasia, correctopia, and polycoria, now referred to as Rieger anomaly, in 1935.[2](Figure 2) Rieger anomaly, associated with systemic findings, such as dental, facial bone defects including maxillary hypoplasia, umbilical abnormalities, or pituitary involvement is known as Rieger syndrome.[3][4] The combination of Axenfeld anomaly and Reiger syndrome is known collectively as Axenfeld-Rieger syndrome. 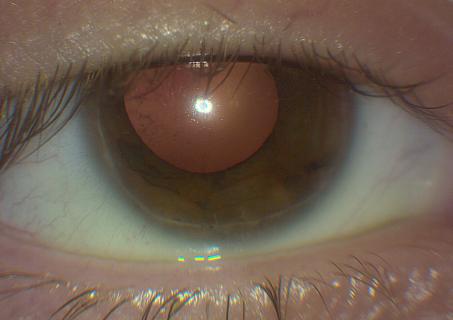 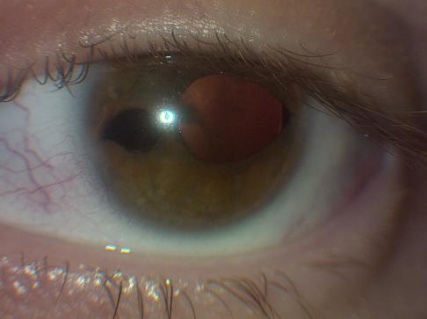 Figures 1, 2. Note in 1 and 2 the posterior embryotoxon, a white line anterior to the limbus in the cornea which is the abrnormal premature termination of Descemet’s membrane with the trabecular meshwork. In figure 2, note the corectopia and area of atrophy commonly seen in ARS. (Images are Courtesy of Vanderbilt Eye Institute and Scott K. Schultz, MD.)

Axenfled-Rieger syndrome is autosomal dominant in most cases, but it can also occur sporadically.[5]It has complete penetrance with variable expressivity and is associated with a 50% risk of glaucoma.[3][5][6]ARS is a genetically heterogeneous group of abnormalities as a result of mutations in at least 4 different gene loci. Mutations in PITX2 on ch 4q25, FOXC1 on 6p25, PAX6 on 11p13, and FOXO1A on 13q14 have been associated with formation of ARS.[7][8][9][10] FOXC1 and PITX2 both encode for transcription factors which regulate expression of downstream genetic targets by binding to specific DNA sequences and activating transcription. In mouse models, both FOXC1 and PITX2 are expressed in the ocular structures affected in ARS during embryogenesis.[11][12] Cases of ARS with mutations in CYP1B1 have also been reported.

This disorder is seen is approximately 1/200,000 live births.  There is no sex predilection.  Most cases are diagnosed during infancy or childhood; however, glaucoma typically occurs in late childhood or adulthood.[3][4]

Defects in differentiation, migration, or arrested development of neural crest cells in the anterior chamber, facial bones, teeth, cardiovascular system, and periumbilical skin are considered to be the etiological basis for the systemic and ocular findings characteristic of ARS.

Histologically, patients with ARS have been found to have a monolayer of endotheilial-like cells with a Descemet-like membrane extending from the cornea, across the anterior chamber and angle structures onto the surface of the iris. The membrane is typically found in the quadrant with associated the ectropion uveae/corectopia and the iris atrophy is found in the opposite quadrant.[4]

As mentioned, Axenfeld-Rieger syndrome is a bilateral, heterogeneous condition and may include developmental abnormalities in the anterior chamber angle, iris, and trabecular meshwork. Correctopia, polycoria, ectropion uveae, posterior embryotoxon, and increased intraocular pressure are common ophthalmologic findings with ARS. Photophobia may be a symptom resulting from the pupillary and iris abnormalities.

The iris strands adherent to the posterior embryotoxon can range from fine threadlike strands to broad bands of iris tissue. Likewise, the iris stroma may be grossly abnormal including generalized atrophy with correctopia, ectropion uveae, and often is similar in clinical appearance to iridocorneal endothelial syndrome(ICE).[4] Systemically, patients with ARS will commonly have mild craniofacial dysmorphism, dental abnormalities, and redundant umbilical skin. The facial abnormalities include hypertelorism, telecanthus, maxillary hypoplasia, and a broad, flat nasal bridge. Dental abnormalities include microdontia, oligodontia, or hypodontia. In addition, patients may have hypospadias, anal stenosis, pituitary abnormalities, growth retardation, and cardiac valvular abnormalities.[5][14][15][16][17] Abnormalities of the pituitary gland and other surrounding areas are less common, but more serious findings. Cases of empty sella syndrome and arachnoid cysts have been reported. Growth hormone deficiency and short stature have also been described.

Glaucoma is seen in approximately 50% of the cases with ARS. Development arrest of the neural crest cells with their retention in the anterior chamber angle during gestation results in incomplete development of the trabecular meshwork or Schlemm canal. The extent of iris defects and iris stands in the angle do not correlate well with the severity of glaucoma.  However, the high iris insertion appears to be more pronounced in eyes with glaucoma.[3] Although glaucoma may present in early infancy, most cases occur during adolescence or early adulthood.

Medical management of congenital and childhood glaucoma is generally used as an adjunct to surgical interventions. Aqueous suppressants, including beta-blockers[18][19] and carbonic anhidrase inhibitors[20]have been shown to be safe and effective. These medications can have side-effects, especially in children with smaller volume of distribution for the drugs;therefore, these patients should be monitored closely. Prostaglandin analogues may be used to lower IOP.[21][22]Alpha-2 agonists, especially brimonidine, is contraindicated in children less than 2 years of age secondary to their association with potentially serious apnea, bradycardia, hypotension, hypotonia, and CNS depression in this population.[23]Apraclonidine should be used with caution for the same considerations, but seems to be safer than brimonidine.[24]For further discussion see: Congenital_Or_Infantile_Glaucoma

As in congenital glaucoma, surgical intervention is more efficacious than medical management in ARS.[25]However, achieving long term surgical success in congenital and developmental glaucoma is also difficult and complications are common.[26][27][28][29][30][31][32] Surgical options include, goniotomy, trabeculotomy, trabeculectomy with or without anitfibrotic agents, aqueous shunt procedures, or cyclodestructive procedures. In a retrospective review of pediatric glaucoma by Bussieres et al, 40% of patients with ARS had goniotomy, 30% had trabeculotomy, and 2% required glaucoma drainage devices.[26]Most of those patients required 1.5 surgeries per eye.[26]

In general, goniotomy and trabeculotomy are less successful interventions in developmental glaucoma than other pediatric glaucomas, presumably because of the angle dysgenesis and other developmental abnormalities associated with this group of glaucomas.[33][34]

Trabeculectomy with mitomycin C is associated with successful IOP lowering effect in 82-95% of cases and long term success around 59% at 2-year follow-up.[27][28] However, this intervention is associated with risk of late post-operative endophthalmitis in 7-8% of cases.[28][29]

Glaucoma drainage devices have been reported to have success rates of 70-90% with long term success reported to be 58-63% at 2-year follow-up.[29][30][31][32][35] The rate of endophthalmitis is low with this procedure, 2.9%,[32]but surgical revision may have to be performed for other associated complications such as dislocation, tube-cornea touch, or erosion.[29][30][31] In addition, concomitant medical therapy is often necessary to augment IOP control with glaucoma drainage devices, and re-operation may be necessary.[25][30][31]In surgically refractory pediatric glaucomas, specifically developmental glaucomas, glaucoma drainage devices are likely to be successful where trabeculectomy has a relatively poor chance of success.[27][31] Cyclodestructive procedures are usually reserved for refractory glaucomas after other options have been exhausted because of low reported success rates, frequent need for re-treatment, and high complication rates.[25]

As patients with ARS age, they may experience significant and debilitating glare or photophobia resulting from the sometimes progressive iris atrophy, polycoria, and corectopia. In these circumstances painted or tinted contact lenses may be beneficial in reducing these symptoms.

Spectrum of disorders characterized by varying degrees of corneal edema, glaucoma, and iris abnormalities. Encompassed by three variations (1) Chandler’s Syndrome, (2) essential iris atrophy, (3) Cogan-Reese(iris nevus). ICE is typically unilateral, female predominance, manifest in early adulthood. Pathologically appears to be an acquired disease where endothelial cells acquire features of epithelial cells.  Chandler’s syndrome is produced when the pathologic changes are confined to the inner corneal surface with dysfunction of the endothelial pump resulting in corneal edema. Essential iris atrophy is produced when the abnormal endothelium proliferates onto the iris surface with subsequent contractile membranes resulting in pupil correctopia, iris atrophy, polycoria. If the malformed and dysfunctional endothelium spreads across the anterior chamber angle, peripheral anterior synechiae develop and result in glaucoma. Cogan-Reese(iris nevus) is manifested by multiple pigmented iris nodules caused by contraction of the endothelial membranes on the surface of the iris.  The unilateral nature, corneal endothelial changes, manifestation in middle age, female predominance, and lack of systemic abnormalities differentiate ICE from ARS.[4][36]

Characterized by a central corneal opacity associated with an absence of Descemet’s membrane and endothelial layers as well as variable degrees of iridocorneal adhesions from the border of the corneal opacity. 60% of cases are bilateral and can be associated with congenital glaucoma, aniridia, and microcornea. Peter’s can also be associated with systemic abnormalities including developmental delay, heart defects, hearing loss, CNS defects, gastrointestinal and genitourial defects.

Peter’s anomaly is usually sporadic, but it can be inherited in an autosomal dominant or recessive pattern caused by PAX6, PITX2, CYP1B1, or FOXC1 genes. Although there are many similarities, the significant corneal changes differentiate Peter’s from ARS.[37]

A bilateral condition with variable appearance of the iris from a rudimentary stump to mild iris atrophy. Aniridia is also characterized by pannus extending onto the central cornea from stem-cell deficiency, cataract, foveal hypoplasia, decreased vision, or nystagmus. Inheritance of aniridia is typically autosomal dominant, but 30% can be sporadic mutation in PAX6.

Aniridia is associated with a 50-75% risk of glaucoma, commonly resulting from rotation of the rudimentary iris into the anterior chamber angle obstructing aqueous outflow, and may not occur until the second decade of life. One must consider WAGR (Wilms tumor, aniridia, genitourinary abnormalities, and mental retardation), an autosomal dominant form seen in 13% of patients with aniridia. Gillespie syndrome, an autosomal recessive form of aniridia, is associated with cerebellar ataxia and mental retardation seen in 2% of patients with aniridia. The conreal pannus, foveal hypoplasia, and iris hypoplasia differentiate aniridia from ARS.[38]

Congenital displacement or dragging of the posterior pigmented epithelium of the pupil caused by contraction of myofibroblasts over the papillary margin. Possibly a component of ARS, ICE, neurofibromatosis, facial hemihypertophy, Prader-Willi syndrome, but can be seen as an isolated finding. Congenital ectropion uveae can also be seen with rubeosis iridis. Unilateral congenital iris ectropion; smooth, cryptless iris surface; high iris insertion; dysgenesis of the anterior chamber angle; glaucoma is consistent with the diagnosis of congenital iris ectropion syndrome.[39][40]

A rare, bilateral, autosomal recessive condition characterized by displacement of the pupil, typically inferotemporally, associated with subluxation of the lens, usually in the opposite direction. This condition is also characterized by microsperophakia, miosis, and poor papillary dilation. Pathologically thought to be secondary to a defect in neuroectodermally derived tissues including the zonules, as well as the dilator muscle and pigmented layer of the pupil. Glaucoma is typically not a feature of ectopia lentis et pupilae.[41]

Axenfled-Rieger syndrome is an autosomal dominant disorder with high penetrance but variable expressivity associated with ocular as well as systemic developmental abnormalities secondary to genetic defects resulting from derangement in neural crest cell differentiation and migration. The most common ocular manifestations include a spectrum of posterior embryotoxon, iris atrophy, correctopia, and ectropion uveae with 50% of patients developing glaucoma. Systemic findings include mild craniofacial dysmorphism, dental and cardiovascular abnormalities, and redundant umbilical skin. Defects in PITX2, PAX6, FOXC1, and FOXO1A have been reported to cause ARS. Management primarily includes surgical management of the glaucoma, prevention of amblyopia, and possibly the use of painted contact lenses for associated photophobia. Life-long monitoring of these patients is important.