Vitreous wick syndrome, "vitreous tug syndrome" as reported by Iliff[1], or vitreous touch syndrome, is characterized by vitreous bands or strands to the corneal wound which can be associated with cystoid macular edema (Irvine-Gass Syndrome).

Vitreous wick syndrome occurs after eye surgery or trauma and is characterized by microscopic wound breakdown accompanied by vitreous prolapse that develops into a vitreous 'wick'.

At first, vitreous wick syndrome was limited to anterior-segment procedures. Subsequently, however, posterior fistulous tracts with vitreous entrapment were reported after vitreoretinal surgery. Vitreous wick syndrome has also been identified as a potential cause of endophthalmitis after intravitreal injection of triamcinolone through the pars plana.[2]

Vitreous wick syndrome may result from the following situations:

Corneal wound healing has been documented to be slower on the endothelial side (inner layers). Poor suturing technique is implicated as a major factor for wound breakdown. Tightly compressed corneal wound edges may demonstrate puckering and also may lead to enlargement of suture tracts, promoting tissue necrosis within the suture loop.[3]

Once communication between the posterior wound gap and the anterior wound defect occurs (subsequent to tissue necrosis from tight sutures), anterior aqueous fluid may egress; vitreous incarceration may also occur, producing the vitreous wick. Occasionally, complete sloughing of strangulated tissue within the suture loop may occur.[3]

Non-iatrogenic traumatic causes involve sharp injuries, intraocular foreign bodies, or blunt injuries causing increased intraocular pressure and inside out injury leading to open globe injury (rupture). Neetens et al reported an 8-year-old girl who was hit by a sharp object that perforated the upper lid and caused a black eye.[4] A surgeon repaired the palpebral wound, and the child was not referred to an ophthalmologist. The girl reported vision loss 2-3 weeks later. The injury resulted in a microperforation of the globe through the conjunctiva and sclera.

Symptoms of vitreous wick syndrome may include the following:

The past ocular history is commonly notable for the following: 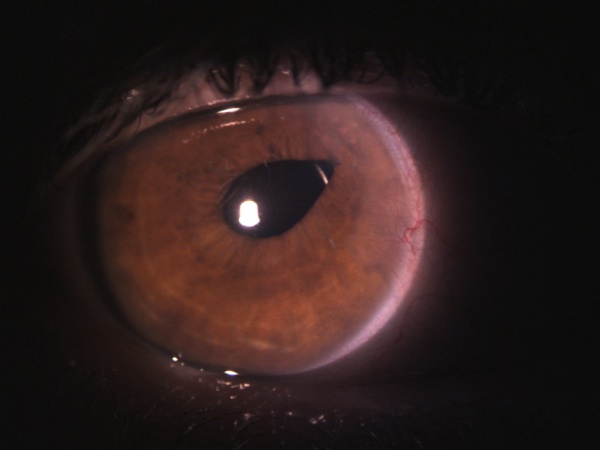 Gross findings on physical examination may include the following:

Slit-lamp findings may include the following:

In the Seidel test, a strip of fluorescein is placed on the area that is suspected of containing a leak, and the dye color is then observed in white light. If a leak is present, the dye changes from orange (concentrated) to green (diluted) and exhibits a waterfall-like effect at the leaking zone. The egress of fluid is noted best under blue light. 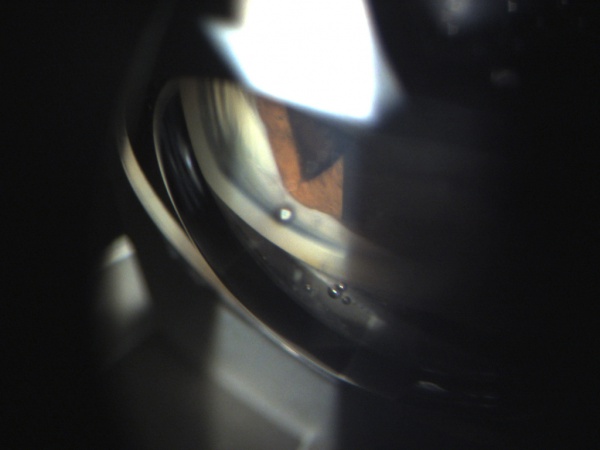 On slit-lamp biomicroscopy, the vitreous wick may have the appearance of a mucoid substance. The examiner may tease the wick with a cotton applicator or a cellulose sponge while taking note of synchronous movement of the iris or of the vitreous strand in the anterior chamber. A peaked pupil may also indicate a vitreous strand in the anterior chamber (Figure 1, 2).

Depending on the presentation of vitreous wick syndrome specimens (eg, swab, vitreous wick, or aqueous) should be obtained from the external and internal eye for the following studies:

All these different pathologies must be considered when presented with a vitreous wick syndrome: 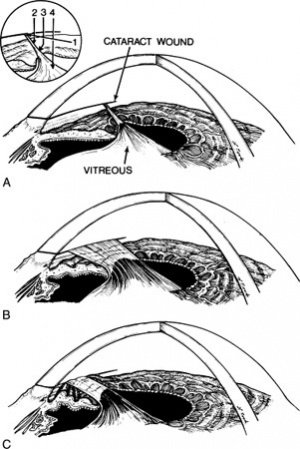 Figure 3: (A) A narrow vitreous strand to a cataract wound. The inset shows possible laser pathways for vitreolysis: (1) a gonioscopic approach, directed at the cataract wound—the location at which the vitreous strand is often the most discrete; (2) a direct approach near the limbus; (3) a direct approach in the region of the collarette; and (4) a direct approach at the pupil. This last approach is rarely successful. (B) A broad vitreous band at the wound. C, Iris pulled upward in a tentlike conﬁguration and entrapped by the vitreous incarceration in the wound. From Steinert RF, Puliaﬁto CA: The Nd:YAG laser in ophthalmology: principles and clinical applications of photodisruption, Philadelphia, 1985, WB Saunders, p 122.

Treatment of vitreous wick syndrome is primarily surgical but may also include medical therapy as appropriate. The surgical approach to the management of this syndrome depends on the presentation (without any restrictions on diet indicated). Participation in strenuous activities and contact sports should be restricted until recovery is complete.

The type of topical antibiotics used in the treatment of vitreous wick syndrome depends on the suspected infecting agent or the culture and sensitivity results.

In cases of endophthalmitis, medical therapy is initiated and selected according to its effectiveness against the suspected or confirmed (via culture and sensitivity results) infecting agents. Subconjunctival and intravitreal antibiotics should be given (and pars plana vitrectomy should be considered alongside medical therapy).

When the vitreous strand or band passes through the pupil, treatment is often facilitated by administration of pilocarpine 2% every 10 minutes for 3 or 4 drops preoperatively. Inducing stretch of the vitreous through miosis facilitates identiﬁcation of the strand. When the laser transects the strand the release of tension is shown more deﬁnitively.

Figure 3 illustrates the three most common conﬁgurations of vitreous to the wound:

The laser can be directed at a vitreous strand in 4 general areas (inset, Figure 3A):

- Pathway 1. The cataract wound is the most reliable landmark during vitreolysis because the vitreous band or strand has to terminate at that location. The cataract wound is visualized with a gonioscopy lens (pathway 1 on ﬁgure), and the laser can be ﬁred at the wound area with a reasonable chance of successful vitreolysis. The energy settings are usually in the 6- to 12-mJ range to obtain adequate cutting power. Lower energy should be tried first. Disadvantages of this technique include the requirement of a gonioscopy lens, and the need to use a contact lens for the completion of the treatment session––even if a different approach is needed later in the session––because of the application of gonioscopy fluid to the cornea.

- Pathway 2. If the cornea is clear near the limbus and a vitreous strand can be visualized with clearance from the iris stroma, direct cutting without a contact lens or with a peripheral button Abraham lens may be successful along pathway 2. Usually 4 to 8 mJ is required. In the course of dozens to hundreds of shots along this pathway, considerable pigment may be liberated from the underlying iris stroma, which will ultimately obscure the surgeon's view. Misfocused shots can cause local damage to the underlying or overlying corneal stroma or underlying iris. 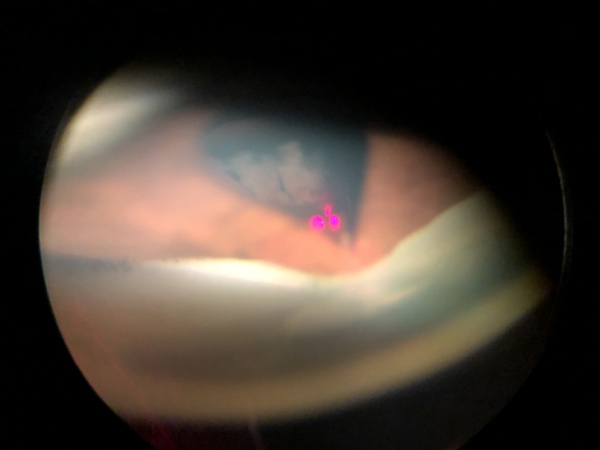 - Pathway 3. If directed at the vitreous passing over the iris collarette, pathway 3 can be helpful, especially when the vitreous has formed adhesions to the collarette, pulling it forward in a tent-like formation. Close proximity of vitreous and iris makes damage to the underlying iris stroma likely, but this may be clinically tolerable.

- Pathway 4. Pathway 4 is rarely successful if directed at the vitreous as it passes around the pupil. Vitreous traction components are poorly deﬁned as they come around the pupil. The shock wave is ineffective at rupturing vitreous strands except directly at the laser focal point. Firing the laser immediately adjacent to the pupillary border causes low-grade capillary hemorrhage and release of pigment, obscuring visualization of the area.

Successful treatment releases the tension and converts a discrete strand or band to an amorphous gelatinous appearance. Observation of the change and any iris deformation is the best indicator of a successful release of tension. Hundreds of shots over several treatment sessions may be necessary to cut a large band. If cystoid macular edema (CME) does not respond to YAG laser vitreolysis alone, posterior sub Tenon triamcinolone, or intravitreal triamcinolone, or intravitreal steroid implants may be needed to control CME. 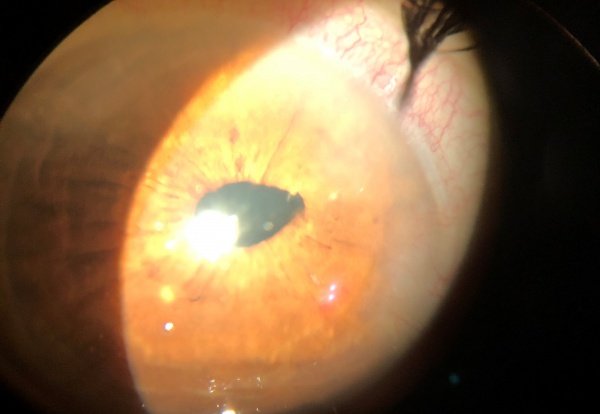 Figure 5: Reversion of corectopia after anterior vitreolysis with Nd:YAG laser. 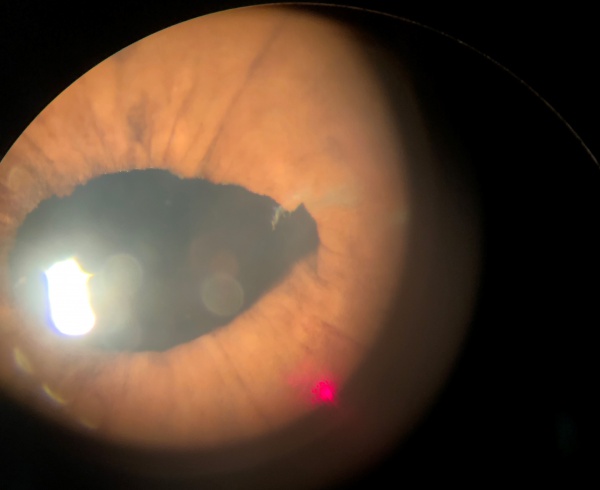 Figure 6: Zoomed in image of Figure 5.

Strong topical steroids (eg, prednisolone acetate 1% or dexamethasone 0.01%) are given 4 times daily until visual improvement occurs, typically in 2 to 3 months. Topical nonsteroidal anti-inflammatory drugs may be of beneﬁt alone or with topical steroids. Ketorolac or diclofenac drops are usually administered 4 times daily. The addition of a systemic nonsteroidal anti-inflammatory drug can be considered in recalcitrant cases.

IOP elevation following vitreolysis has not been well documented. A beta-blocker or brimonidine drop at the time of treatment probably provides adequate prophylaxis.

With the availability of laser vitreolysis, the surgeon may treat vitreous strands to the wound in the absence of cystoid macular edema (CME) in an effort to prevent its later development. Only a large, long-term randomized treatment trial can determine the usefulness of this approach. Some patients with vitreous strands to the wound never acquire CME.

A baseline fluorescein angiogram and optical coherence tomography may be done to document the macular status in patients with vitreous to the wound and good visual acuity. If CME is detected, laser vitreolysis is probably indicated even in the presence of good acuity. If visual loss later develops with the new onset of CME, the baseline angiogram will be useful to further support therapeutic intervention.

The precise surgical treatment varies with the circumstances. The following is a generalized procedural description.

Initially, the vitreous wick is excised or severed with Vannas-type scissors by lifting the exposed vitreous strand with a cotton-tipped applicator or fine nontoothed forceps. Alternatively, a suction-cutting instrument inserted into the anterior chamber may be used.

Vitrectomy may be performed via an anterior limbal approach or a closed posterior approach. It is imperative that no vitreous strand is left above the pupillary plane. To detect any remaining vitreous, one should sweep the anterior chamber with a spatula from a paracentesis site 90° away from the surgical wound.

Patients should receive follow-up care 1-2 days after surgery. If this initial follow-up examination identifies no problems, regular checkups should be scheduled for uneventful anterior segment surgeries. The use of an eye shield, especially at night, protects the globe from any untoward traumatic episodes.

The prognosis is mainly dependent on the presence or absence of cystoid macular edema.

Katzen, Fleischman, and Trokel reported the use of the Nd:YAG laser to lyse strands of vitreous to cataract wounds. Vision improved in all 14 patients treated. The presence of CME, however, was judged clinically, and the results of fluorescein angiography before and after laser treatment were not reported for 13 of the eyes.[8]

Because of the unpredictable natural history of aphakic CME, with erratic response to antiinflammatory agents and frequent spontaneous improvement, small and controlled series cannot unequivocally prove the efﬁcacy of a given technique. Clinical experience, however, has conﬁrmed a high rate of visual improvement after anterior segment vitreolysis, particularly in favorable cases. In Steinart and Wasson series of 29 patients[9], 22 had fluorescein angiographic conﬁrmation of CME before laser treatment. The interval between cataract extraction and treatment averaged 10 months, with a range of 1 to 42 months; average follow-up after laser vitreolysis was 10 months, with a range of 3 to 27 months. No patient had loss of vision after laser vitreolysis. The visual acuity in 16 of the 29 patients (55%) improved by 2 or more lines, with stable acuity following treatments. Five (17%) patients' vision improved by at least 2 lines, but they experienced ongoing fluctuation of acuity. Vision in 8 patients (28%) showed less than 2 lines of improvement. Of these 8 patients: 2 had progressive maculopathy in addition to the CME (1 had an epiretinal membrane and one had progressive diabetic maculopathy); 2 had severe glaucoma with loss of central vision in addition to the CME; and 2 had persistent CME. Two patients were lost to follow-up without documentation of the basis for persistent unimproved acuity.[9]

Patients who did not respond to vitreolysis had the poorest pretreatment visual acuity measurements.[9]