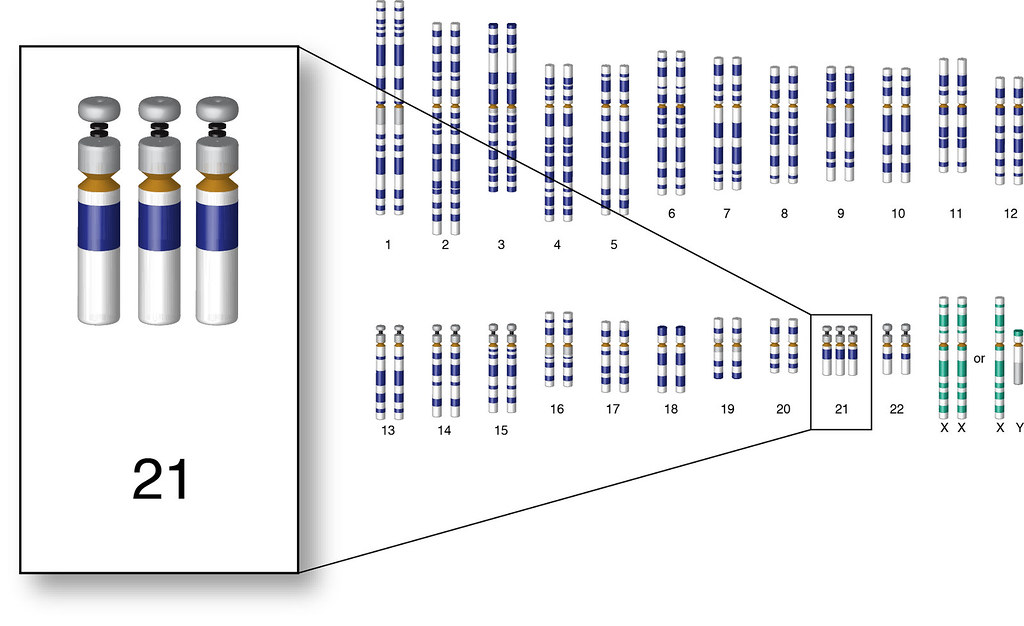 Down (or Down’s) syndrome (trisomy 21) is the most common chromosomal anomaly in children.[1] This syndrome is typically marked by a characteristic facial appearance, short stature, intellectual disability, and cardiac anomalies. Children with Down syndrome are at increased risk for a variety of ophthalmic disorders, including strabismus, high refractive error, keratoconus, accommodative insufficiency, cataracts, nasolacrimal duct obstruction, blepharitis, and nystagmus. Close observation and management of disorders by a pediatric ophthalmologist is necessary as visual impairment in addition to the social, behavioral, and emotional difficulties experienced by individuals with Down syndrome can be a significant impediment to quality of life.[2]

Down syndrome is caused by expression of a third copy of chromosome 21. This extra chromosomal material can be transmitted in three ways. The most common mode of transmission (90-95% of cases) is nondisjunction of either the maternal or paternal chromosome 21 pair during the first phase of meiosis leading to individuals having a complete additional chromosome. Approximately 3-4% of Down syndrome cases are caused by an unbalanced translocation, with chromosome 21 fused via its centromere to another acrocentric chromosome, usually chromosome 14. A de novo mutation leads to 75% of translocation cases, and a balanced translocation in a parent leads to 25% of these cases. In 1-2% of Down syndrome patients, mosaicism is present due to an error in cell division in the early embryonic stage, and these patients may have a less severe phenotype.[3]

Down syndrome is the most common chromosomal abnormality.[4] Down syndrome occurs in approximately 1 in 700 births, and the frequency rises with maternal age due to an increase in nondisjunction events. Roughly 5,400 children with Down syndrome are born each year in the United States.[5]

The reported prevalence of ophthalmic disorders in Down syndrome patients ranges from 46% to 100%.[6] The incidence of associated eye disease requiring monitoring or intervention increases with age, from 38% of children with Down syndrome < 1 year old to 80% of 5 to 7 year-old children.[7]

Best corrected visual acuity (BCVA) in Down syndrome patients is on average less than comparative controls, even in patients with no apparent ocular abnormalities [39]. In studies of visual acuity in children with Down syndrome, BCVA was found to be 20/45 on average,[28] worse than 20/50 in 24% of patients,[40] and below average for age for 94% of subjects, with 79% of subjects falling two standard deviations below the mean.[41] There are multiple causes for this decrease in BCVA. One major cause is amblyopia, which affects 3% to 26% of children with Down syndrome.[16][19][23][40] As strabismus is common in Down syndrome, early and regular assessment and treatment can help minimize visual loss due to amblyopia. Nystagmus may also account for a substantial extent of visual acuity loss.[25] Other common causes of decreased visual acuity in Down syndrome patients include cataracts and high refractive errors.[42] It has also been hypothesized that abnormalities in the development of the visual cortex may further limit visual potential, even in children with relatively mild ocular pathology. [43]

Poor accommodative ability is a classic ophthalmologic finding in children with Down syndrome, and this may be an additional barrier to literacy and early learning in these children. Using dynamic retinoscopy, studies have found that 32% to 100% of children with Down syndrome have an abnormally low ability to accommodate, measured by accommodative response.[34][44] [45][46] Inaccurate accommodation has been found to be associated with hypermetropia and strabismus.[34][47] The etiology of this hypoaccommodation is still unclear. While mechanical deficits of the accommodative mechanism (as in presbyopia) may be a factor, recent research suggests a more likely etiology is impaired sensory pathway signaling for an accommodative response to a near stimulus.[28]

The most common findings are upward slanting palpebral fissures, with a prevalence ranging from 63% to 82% in children with Down syndrome,[16][20] and large epicanthal folds, ranging from 31% to 97%.[13][15][16][17][20] Blepharitis is also a common finding in Down syndrome patients. The prevalence of blepharitis in children with Down syndrome ranges from 3% to 34.5%.[10][11][13][14][15][16][17][18][19][20][22] The wide range in prevalence may be due to differing criteria for diagnosing blepharitis.[48] The high rate of blepharitis has been speculated to be due to impaired immune or due to skin abnormalities in Down syndrome individuals.[16][49] Other disorders of the eyelids include epiblepharon, which has been found to be more common in a Korean population of Down syndrome patients with a prevalence of 54% (ranging from 43% at birth to the highest of 65% at ages 4 to 6).[20] In comparison to a Japanese population of control patients, epiblepharon incidence at birth was 46% and decreased to 9.9% by age 18.[50] However, in a Malaysian population of children with Down syndrome with a mean age of 7 years old, the incidence of epiblepharon was 2%.[17]

Down syndrome is one of the strongest risk factors for keratoconus, as studies using modern corneal topography have demonstrated an incidence as high as 20.8-32% in people with Down syndrome.[53][54] One study in Norway found that the risk of keratoconus was 30 times higher in patients with Down syndrome compared to the population at large.[55] Keratoconus in Down syndrome commonly develops in childhood or teenage years, with one case report describing a child diagnosed as early as 4 years old.[56][57]

The cornea in patients with Down syndrome is steeper with higher rates of astigmatism than controls.[26] Eye-rubbing has been thought to play a role in developing keratoconus,[58] [59] which patients with Down syndrome may be more prone to due to the higher rate of chronic blepharitis.[48] [60]Some studies have suggested a genetic link between genes on chromosome 21 and keratoconus, which could explain the increased prevalence in trisomy 21.[61] [62] 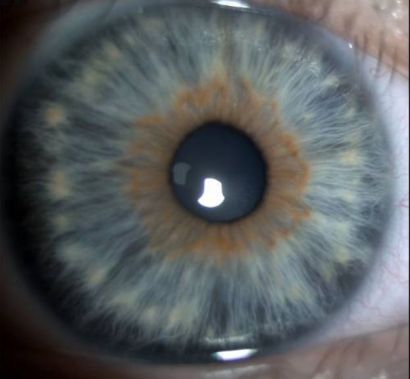 Brushfield spots in a child with Down syndrome.[39]

Brushfield spots are white, gray, or brown spots spaced around the periphery of the iris. They are focal areas of iris stromal connective tissue hyperplasia which are of no functional importance.[27] They are not pathognomonic for Down syndrome and can be seen in children without disease. Brushfield spots are more common on blue, green or hazel irides compared to dark irides.[16] The prevalence of Brushfield spots differ in various ethnic populations, possibly reflecting variations in predominant iris color between ethnic groups.[10] In studies of children with Down syndrome in Italian, Egyptian, and South and East Asian populations, Brushfield spots were not found in any patient. [11] [13] [15] [18] [20] In Slovenian, Brazilian and American studies, the prevalence was found to be 16.9%, 52%, and 81% respectively.[16][48][63] 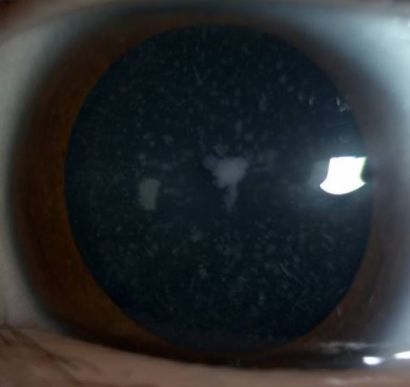 Cerulean (or blue dot) cataract in a teenager with Down syndrome.[39]

Some studies have also found that age-related nuclear sclerotic cataracts may develop at an earlier age in the Down syndrome population, with one paper reporting an average age of 48.4 years at time of diagnosis of age-related NSC.[69][64]

OCT studies have demonstrated a high incidence of foveal hypoplasia in children with Down syndrome, with abnormalities of the inner retinal layers especially prevalent.[70][71]

Retinoblastoma has also been speculated to be connected to Down syndrome, possibly caused by oncogenic genes overexpressed on chromosome 21, although there have only been a few recorded cases of this disease in Down syndrome patients.[17][72][73]

It has been reported that diabetics with Down syndrome may have a lower incidence of diabetic retinopathy, though the only relevant study included only 9 patients.[74] There are no published studies on the incidence of macular degeneration in the Down syndrome population.

Another common disc abnormality in Down syndrome is a spoke-like appearance with a high number of vessels crossing the margin of the optic nerve. Although not associated with vision loss, studies have found that 13% to 38% of children with Down syndrome have 18 or more vessels crossing the disc margin.[10][20][24][76] This has been proposed to be a consequence of a deficiency in systemic angiogenesis.[77]

Down syndrome is associated with impaired cortical development during pregnancy and early childhood, as well as accelerated brain atrophy as individuals age.[80][81] It is hypothesized that abnormalities of the visual cortex may contribute to the decreased visual acuity often encountered in patients with Down syndrome, including those with relatively normal ocular anatomy.[39]

Pediatric ophthalmologists should be considered part of all Down syndrome children’s healthcare team whose contributions greatly assist in allowing the patient to reach his or her full health and developmental potential. The American Academy of Pediatrics provides the following recommendations for visits to a pediatric ophthalmologist by all children with Down syndrome:

The treatment of strabismus for children with Down syndrome is similar to the general pediatric population. Bilateral medial rectus muscle recession for esotropia in patients with Down syndrome with the standard surgical dosage results in similar outcomes as controls and does not typically result in overcorrection as has been thought to occur in developmentally delayed children.[83] [84]

A fine, rapid horizontal nystagmus in patients in Down syndrome occurs frequently, is generally stable or self-resolving, and needs no specific investigation or intervention.[14]

Refractive error is treated with prescription glasses. Compliance with glasses wear is generally high, although difficulties can arise depending on the individual. The addition of bifocals due to reduced accommodative ability may be important for optimal near vision to promote learning potential.

Although visual acuity testing can be difficult in children, especially with intellectual disability, visual acuity has been measured in preverbal children with Down syndrome using Teller, Keeler, and Cardiff acuity cards with success rates ranging up to 100%. [12] [13] [25] [40] [41]

Use of bifocal prescriptions can significantly improve the accommodative ability of people with Down syndrome, with the improvement often continuing after returning to single vision lenses.[85] In addition, bifocals have also been found to help with accommodation when looking through the distance portion of their glasses, meaning that instead of solely being a focusing aid as with presbyopic adults, bifocals may help children better use their own accommodative ability.[86] Nandakumar et al. suggests that children should first be checked for their refractive error, as they found that 79% of children with Down syndrome did not have a correct prescription, possibly due to difficulties with examining this population or due to lack of adequate care for patients with developmental delays.[46] Compliance with eyeglasses wear was comparable to children without disabilities, at 82% being fully compliant and 18% being partially compliant.[86]

Blepharitis can be treated similarly as with children without Down syndrome. See EyeWiki article on Blepharitis.

In the general pediatric population, probing procedures have a high rate of success, as the common reason for obstruction is failure for Hasner’s membrane to open. However, in Down syndrome, canalicular stenosis and atresia are more common reasons for obstruction. A more aggressive initial treatment may be appropriate, such as stents or balloon dilation, depending on the etiology of the obstruction.[51][87]

Brushfield spots are a benign finding and require no treatment.

Neonates with known Down syndrome should be carefully checked for a robust red reflex by a pediatrician shortly after birth to screen for congenital cataracts. If a cataract is found, surgical intervention may be required. See EyeWiki article on Congenital Cataracts.

The blood vessel spoke-like appearance is a benign finding with no management needed. Other retinal pathology should be treated as with the general pediatric population.

Optic nerve edema, papilledema or idiopathic intracranial hypertension should be suspected in children with elevated optic disks, but they may represent transient, benign findings in children with Down syndrome.[91]

The child should be monitored for signs of primary congenital glaucoma, and if present, medical and surgical interventions are required.

Down syndrome is a common genetic disease with a high rate of ophthalmic findings. Some manifestations are benign, such as epicanthal folds and Brushfield spots, but Down syndrome is associated with lower visual acuity due to refractive error, astigmatism, amblyopia, nystagmus, and cataracts, among other disorders. These disorders require early evaluation and follow-up by a pediatric ophthalmologist with expertise in developmentally challenged populations to provide the best visual outcome for the child and throughout adulthood.