Superior orbital fissure syndrome is rare, and the majority of literature consists of case reports and case series. When originally identified, the syndrome was thought to be secondary to a “syphilitic periostitis” [4] because it responded when treated for syphilis. The most frequent cause of superior orbital fissure syndrome is now known to be trauma, which is seen in 0.3-0.8% of patients [3][5] [6] . Common associations are motorcycle accidents, zygomatic fractures and orbital fractures [7] . Trauma-related superior orbital fissure syndrome often presents within 48 hours of a facial injury, but presentation can also be delayed by several days [8] . Other causes include neoplasms (particularly lymphoma and rhabdomyosarcoma) [9] , infections (such as meningitis) [10] , syphilis [11] , sinusitis [12] [13] , herpes zoster [14] [15] [16] , inflammation (such as Lupus, sarcoidosis, Tolosa-Hunt syndrome) [2] and vascular phenomena (such as carotid-cavernous fistulas, retro-orbital haematoma and carotid aneurysms), [5] [17] or idiopathic.[18] Rarely, superior orbital fissure syndrome has presented perioperatively in orbital hypertelorism surgery [19] . Presentation from trigeminocardiac reflex episodes during skull base surgery has also been reported [20]. 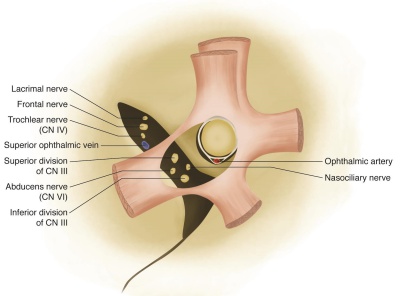 Image 1: View of orbital apex, right orbit. The tendon of the lateral rectus muscle divides the fissure into two parts: superior and inferior. The ophthalmic artery enters the orbit through the optic canal, whereas the superior and inferior divisions of cranial nerve (CN) III, CN VI, and the nasociliary nerve enter the muscle cone through the oculomotor foramen. CN IV, the frontal and lacrimal nerves, and the ophthalmic vein enter through the superior orbital fissure and thus lie within the periorbita but outside the muscle cone. Note that the presence of many nerves and arteries along the lateral side of the optic nerve mandates a superonasal surgical approach to the optic nerve in the orbital apex. © 2018American Academy of Ophthalmology. http://www.aao.org. 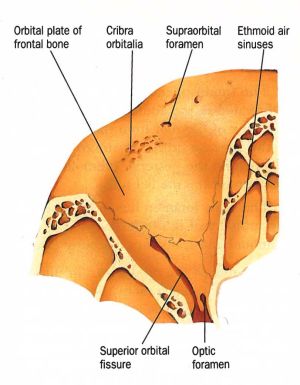 The superior orbital fissure is a bony cleft found at the orbital apex between the roof and lateral wall. It is a communication between the orbital cavity and middle cranial fossa and is bounded by the greater wing, lesser wing and body of sphenoid [21]. Its dimensions are 22mm in length and 2-8mm in width (narrowest and widest parts) and it is pear-shaped with a wide base nasally on the body of sphenoid and an apex directed superotemporally[5]. There is no significant variation of SOF size between gender or body type.[22]

Compression of structures in superior orbital fissure syndrome can be attributed to a bony fragment (such as with facial fractures) or mass effect. In all causes of superior orbital fissure syndrome, inflammation and compression of nearby nervous tissue is responsible for the majority of clinical symptoms.[18] Since the orbital muscle cone is of relatively fixed volume, being bounded by the intermuscular membrane and Tenon’s capsule, any edema or bleeding or masses in this area compromises delicate neural structure [26].

Anatomical structures within common tendinous ring (i.e. central sector) are the most vulnerable. In particular the abducens nerve is most commonly damaged [3] as it is within the central sector, lies close to the greater wing and has a relatively long intracranial course RIA. The trochlear nerve is the least commonly involved [3] as it exists above the common tendinous ring where it is well protected [5]. The anatomical proximity of the superior orbital fissure to the cavernous sinus and internal carotid artery permits vascular pathology such as carotid aneurysms and carotid-cavernous fistulas to cause compression [3].

Other findings which may give insight into underlying etiology include:

It should also be noted a phenomena of partial superior orbital fissure syndrome has also been described where involvement is strictly confined to the central sector thus associated with isolated oculomotor, abducens and nasociliary involvement [5]

The diagnosis of superior orbital fissure syndrome is suspected on clinical grounds. Imaging studies play a role in confirming the diagnosis, and more importantly, give insight into underlying etiology. Early use of plain film with superior orbital fissure views (20-25° head tilt) has largely been replaced by widespread availability of CT and MRI. The most common imaging modality is currently CT with 2mm fine cuts looking for bony fragments or compressive masses. Where a vascular cause is suspected, angiography is recommended to define any carotid-cavernous fistula or carotid aneurysm [5].

In cases managed conservatively or medically there is little consensus on need for follow-up imaging but Shama et al. (2012) suggests a repeat MRI at 6 months [1].

The management of superior orbital fissure syndrome depends on its etiology. Treatment is not standardized because relatively few cases have been documented. Reported treatment options include medical and surgical intervention, as well as observation alone [35]. Indications for urgent intervention are vascular causes (requiring embolization) and bony fractures with displaced fragments or severe foraminal narrowing [3], particularly lateral orbital wall fractures [36]. Cases involving neoplasms, physical impingement, infections, or retrobulbar hemorrhage warrant the use of surgical exploration.[18] In certain cases, a combination of treatment options may be appropriate, such as a megadose corticosteroid treatment combined with surgical intervention [36].

If the superior orbital fissure is compressed or narrowed by a facture, surgical decompression may be beneficial [35][36]. Surgical management in the non-urgent setting is performed at an average of 10.7 days due to concerns that early intervention is associated with increased swelling and ocular pressure [3]. Both orbital and cranial extradural approaches have been described including extranasal intraorbital to access the lateral wall, extranasal transethomoidal to access the medial wall, a modified extranasal intraorbital route, transtemporal route in causes of infectious collections and combined orbital and cranial for deep decompressions [37][38][39]. An endoscopic transmaxillary transMuller’s muscle route for decompression may also be effective, though sample size is limited [40]. A concomitant facial fracture can be surgically reduced [35].

Historical treatment of restricted movement due to edema has focused on conservative management and careful observation because spontaneous improvement had been documented in the past. However, if there is no evidence of bone dislocation, and thus no need for urgent surgical intervention, conservative medical treatment involving megadoses of corticosteroids has proven effective [35][36]. The most common regimen mirrors that of spinal cord/nerve injury protocols and involves intravenous IV methylprednisolone as a 30mg/kg bolus followed by a 5.4mg/kg/h on a 48 hour infusion, followed by oral prednisone taper over 2 weeks [4][41].

In cases of retroorbital hematoma, hemorrhage generally resorbs spontaneously after 3-12 weeks. However, some authors recommend intervention if the hematoma is associated with fractures, such as aspiration, open reduction, or intravenous steroids [35]. Cases of carotid-cavernous sinus fistula can be confirmed with carotid angiography and treated via detachable balloon or coil embolization [35].

Conservative treatment through observation alone has been suggested due to the operative difficulty and risk of further injury from surgical exploration. Spontaneous recovery, both complete and partial, of motor and sensory function has been reported in cases of traumatic etiology [42]. A recent literature review documented nineteen cases of superior orbital fissure syndrome secondary to craniofacial trauma treated with observation alone, with complete spontaneous recovery in eight of the cases [35].

No adverse effects from medical therapy with high dose steroids in this setting have been described [34]. Complete recovery of all nerves has been reported in 24-40% of patients receiving steroid treatment compared to 21.4% in those without. Recovery is usually extended over a period of months with progress plateauing at 6 months. The abducens nerve which is most commonly damaged shows the best recovery.