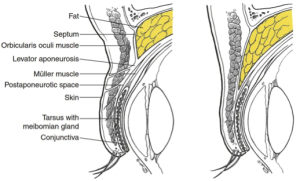 Double eyelid surgery is a procedure performed with the primary goal of creating an upper eyelid crease. This article discusses the variations in eyelid anatomy, which transcend race, between a single fold and double fold eyelid. Additionally, surgical techniques to create a double fold and associated risks and complications will be reviewed.

The external contour of the upper eyelid demonstrates variations, in part, based on the structure and position of the eyelid crease and the eyelid fold. These features depend on the anatomical relationship between several structures of the upper lid: specifically, the skin, orbicularis oculi muscle, orbital septum, preaponeurotic fat, levator aponeurosis and tarsus. The distal end of the levator aponeurosis fans out into multiple fibrous extensions, which insert into the pretarsal orbicularis muscle and adjacent subcutaneous tissue.[1] These insertions are responsible for the formation of the upper lid crease, most notable when the eyelid opens and the levator contracts, dragging skin into the orbit. The eyelid fold results from the draping of the loose preseptal skin and soft tissues superior to insertion of the orbital septum onto the levator aponeurosis and the descent of the preaponeurotic fat towards that fusion site.[2]

No apparent eyelid crease, creating the appearance of a “single eyelid”.

Multiple studies have demonstrated that anatomical variation exists between Asian and non-Asian eyelids.[3][4][5][6] However, there are many examples of non-Asian eyelids that demonstrate the anatomic configuration of an Asian eyelid in terms of lid fold and crease and vice versa. Given the heterogeneity of eyelid configurations that transcend race, the terms single and double or low and high fold may be more appropriate. Additionally, there are eyelids that possess a multifold or a fold that changes with hydration, swelling, etc. The various eyelid morphologies include both “single eyelids” and “double eyelids.” The single eyelid morphology refers to an eyelid without an apparent eyelid crease, whereas the “double eyelid” refers to that with a visible eyelid crease. There are variations in morphology including a “low double fold”.

In the double fold or high fold eyelid, the fusion may occur above or at the superior tarsal border, whereas, in the single fold or low fold eyelid, the fusion occurs at a variable level below the superior tarsal border.[1][3] This results in more inferiorly positioned preaponeurotic fat tissue.[6] Varying prominence of preseptal, periorbital fat tissue is found amongst different types of eyelids.[7] Together, it is believed that the existence of this fat may prevent the fibrous bands of the levator aponeurosis from attaching to the pretarsal orbicularis muscle, subcutaneous tissue and skin leading to a single fold or an attachment that is lower than the edge of tarsus leading to a low double fold. (Figure 1)

In addition to the differences in the presence of absence of a fold, but there are significant variations in the double fold configuration. Many studies have been performed to examine the prevalence of single and double eyelids in the Asian population.[8][9][10][11][12][13] Studies suggest that between 30.3% - 50% of Asians have double lids.[9][14] The reported prevalence is lower in Korean populations (24.1-45%) and higher in Chinese and Japanese populations (66.7-83.1% and 82.5%, respectively).[8][10][11][12] However single or no fold configurations exist in the non-Asian community as well and are present in some of our most iconic celebrities. A double fold configuration also transcends race and may been seen in iconic celebrities as well.

The double eyelid surgery, historically known as “Asian blepharoplasty” refers to the procedure performed to create an upper lid crease in Asian patients, though it is performed on all races that choose to transform a single fold or low double fold to a higher double fold. It is one of the most commonly performed aesthetic procedures in Asia and among Asian populations in North America.[9] Many factors motivate patients to undergo this procedure. It is a common misconception that the surgery is a means of westernizing the Asian eyelid. Rather, patients often wish to preserve the aesthetics unique to his or her culture and ethnicity. The Asian patients that undergo this procedure typically desire the appearance of an Asian eyelid with a naturally occurring upper lid crease.[15] Pre-surgical discussions are essential to understand patient preference and optimize patient satisfaction. While the double eyelid surgery is performed for aesthetic purposes, it may also be indicated for improvement of the visual field if significant skin is draping over the lid margin impairing vision.[16] Patients undergoing this procedure cosmetically may wish an elevated crease to provide greater surface area to wear makeup to achieve a more glamorous or in some cases youthful appearance.

Before and after images following the double eyelid procedure in a non-Asian patient.

The techniques with which the double eyelid surgery is performed can be broadly categorized into two principle methods: suture ligation and external incisional techniques.

The suture ligation technique is a non-incisional strategy to obtain an upper eyelid crease. A suture is passed full-thickness or partial thickness through the lid skin and deeper supratarsal tissue. The structures are secured together with a buried, surgical knot. Scarring between the tissues incorporated into the suture knot results in the desired lid crease. The number of sutures used, and the lid structures incorporated vary between methods.[9]

This technique involves an incision into the external structures of the upper lid. Selective removal of skin, orbicularis oculi muscle and preaponeurotic fat may be performed. A suture is placed into either the skin or the soft tissue at the inferior incision site and looped through the levator aponeurosis. Such sutures mimic the extensions of the levator aponeurosis as seen in a naturally occurring lid crease. This supratarsal fixation suture may be incorporated into the eyelid incision closure performed with simple running suture that that is removed during the post-operative course.[9][17]

Generally, surgical complications related to the double eyelid surgery include patient dissatisfaction, malposition of the lid crease, asymmetry between lids, lagophthalmos, blepharoptosis, and bleeding.[9][18] Complications specific to the suture ligation technique include a static-appearing lid crease that does not soften with downgaze, foreign body sensation resulting from full-thickness, buried sutures, as well as the complete or partial loss of the surgically created lid crease over time. The latter of these can be seen when suture knots loosen or cheese-wire through involved tissues.[17] Complications specific to the external incisional technique include visible scarring and the potential for a significant hypertrophic scarring. Fortunately, keloid formation is rare.