The Pulfrich phenomenon (also known as the Pulfrich effect) is a neuro-ophthalmic observation in which two-dimensional (2-D) objects are perceived to be three-dimensional (3-D) due to slight discrepancies in signal transmission time between a set of eyes and the visual cortex [1]. The relative delay in conduction in one of the optic pathways causes a discrepancy in visual perception between the two eye and may cause difficulties in daily activities, such as sports and driving [1][2].

The Pulfrich phenomenon is classically described in demyelinating optic neuritis but has also been observed in other ocular conditions (e.g., cataracts) [1][3]. Individuals who experience this effect often notice it with moving objects that travel within a single plane. A well-known illustration to elucidate this phenomenon involves a patient viewing a pendulum swinging side-to-side [4]. As the pendulum swings side-to-side, an unaffected binocular individual will track the motion of the pendulum with the same rate of retinal signal transmission to the visual cortex, thus interpreting the motion as uniplanar. An individual who experiences the Pulfrich Phenomenon has a relative conduction delay in one of the optic pathways when viewing the pendulum. The perceived distance of the pendulum differs when processed by the visual cortex, presenting with a misjudgment in object depth. Therefore, the swinging pendulum appears to be moving in a circular direction due to this disparity, causing a 3D image from a single planar movement. This delay can also be elucidated with a uniocular dark lens, also known as a neutral density filter, which can cause a delay in signal latency to the visual cortex. Studies have shown that a factor of ten reduction in unilateral retinal illumination produces a 15-millisecond delay (Figure 1.) [5]. 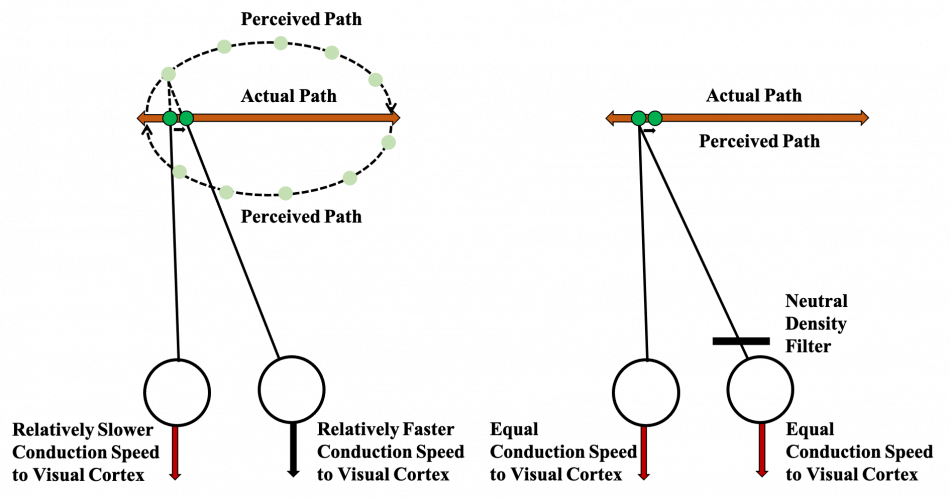 History of the Pulfrich Phenomenon

The Pulfrich phenomenon is a result of a delay in afferent signal conduction to the visual cortex [7]. Thus, there are various etiologies behind this effect. A common pathology that displays the Pulfrich effect is demyelinating optic neuritis (e.g., multiple sclerosis). In multiple sclerosis, there is an autoimmune demyelination of the central nervous system due to inflammatory attacks against oligodendrocytes, including the oligodendrocytes that myelinate the optic nerves. The primary role of myelin is to increase the speed of electrical conduction across the axon. If one of the optic nerves is affected in multiple sclerosis, this will cause a discrepancy in the electrical conduction of the optic pathway to the visual cortex, resulting in the Pulfrich phenomenon.Interestingly another reported cause of the Pulfrich phenomenon is unilateral cataract [8]. A study consisting of 29 patients with unilateral cataract and contralateral pseudophakia was conducted to analyze the Pulfrich effect with a computer image of a pendulum. Rotation of the uniplanar pendulum was seen in these subjects but was also neutralized with density filters in the pseudophakic eye.

In most cases, treatment of the underlying condition causing the unilateral conduction delay resolves the symptoms (e.g., cataract surgery for unilateral cataract). However, in some cases where the underlying etiology is irreversible, there have been treatments developed to reduce and/or eliminate this phenomenon. As previously mentioned, a neutral density filter over one eye may produce the Pulfrich effect in non-affected individuals by increasing the latency in retinal processing. In patients with Pulfrich phenomenon, a similar method with a neutral density filter can be applied to the unaffected or less affected eye [9]. A longitudinal study with uniocular contact lens or tinted spectacle in the lesser affected eye of Pulfrich phenomenon patients reported elimination of the effect for years [10]. This attenuation through a light-filtering lens allows for the signal transmission of the lesser affected eye to match the slower conduction of the more affected eye.

While the Pulfrich phenomenon may have different etiologies, visual evoked potential (VEPs) may be used to confirm the visual latency that causes this effect [10][11]. VEPs measure evoked electrical potentials in the visual cortex after stimuli (e.g., flash) are presented to each eye [12]. These tests can measure the conduction speed after the flash and provide useful information in quantifying the current function of the optic nerve pathway.

The Pulfrich phenomenon can be treated by addressing the reversible causes of vision loss (e.g., cataracts) or by using a neutral density filter for irreversible causes (e.g., optic neuritis) [8][10]. In some cases, the underlying etiology for the Pulfrich phenomenon may progressively worsen further slowing the transmission in the affected eye and widening the disparity between the two optic nerve pathways [4]. Such cases may require changes in the neutral density filter for treating the Pulfrich Phenomenon [1][4].

Clinicians should be aware of the Pulfrich phenomenon and that it may present in patients with demyelinating optic neuritis or unilateral cataract. Treatment of the underlying etiology is generally sufficient, but some patients require neutral density filters to balance out the transmission asymmetry to relieve symptoms.