Proliferative vitreoretinopathy (PVR), a major complication of rhegmatogenous retinal detachment (RRD), is an abnormal process whereby proliferative, contractile cellular membranes form in the vitreous and on both sides of the retina, resulting in tractional retinal detachment with fixed retinal folds. However, it is increasingly being recognised that PVR may be intraretinal also, which causes retinal shortening. Research suggests that membranes form in response to cytokines and inflammatory mediators that arise following anatomic disruption and tissue damage caused by rhegmatogenous retinal detachment (RRD) and resultant inflammation. Treatment is principally surgical and often requires multiple procedures that, in fact, yield a high rate of retinal reattachment; nevertheless, many anatomically successful eyes do not recover good visual function likely due to the long standing macular detachment.

In general, PVR is comparable to an abnormal wound-healing process following tissue insult, more specifically, retinal detachment. Rhematogenous retinal detachment (RRD) serves as a nidus for membrane formation, in part through induction of ischemia and subsequent cell death that arises from separation of the neuroepithelium from its rich choroidal blood flow. Cell death triggers a break down in the blood-retinal barrier (BRB),[5] [6] thereby facilitating the influx of chemotactic and mitogenic factors that permit cell proliferation, migration, extracellular matrix deposition and contraction. Similarly, the vitreous is suffused with growth factors and inflammatory mediators; thus, it serves as a milieu for cellular proliferation in the case of retinal detachment.[7] Contractile membranes contain fibroblast-like cells in extracellular matrix that have characteristics of RPE and glial cells on the inner surface of the retina and mostly RPE cells on the outer (subretinal) surface of the retina.[8]

Although the exact pathophysiology remains disputed, the development of PVR is a complex process involving humoral and cellular factors. Crucial cells in the development of PVR are retinal pigment epithelial (RPE) cells, glial cells, fibroblasts and macrophages.[9] Following retinal detachment and subsequent ischemia, some RPE cells lose their polarity and undergo epithelial-mesenchymal transformation (EMT).[10] EMT is a process whereby epithelial cells lose their typical epithelial morphology and phenotype and acquire a mesenchymal-like morphology and phenotype. Various chemokines and cytokines, most notably TGFbeta, PDGF,[11] VEGF, IL-1, 6, 8, 10 and IFN-gamma,[12] whose presence is permitted via breakdown of the BRB, induce cell proliferation, migration, extracellular matrix deposition and contraction. Transformed cells in membranes become fibroblast-like cells that contain actin and myosin and have the ability to contract. Activation of Muller glia leads to marked gliosis within the retina that leads to retinal stiffness and shortening.[13] Macrophages may play a multifactorial role that involves secretion of enzymes and growth factors (e.g., platelet-derived growth factor, PDGF) and transdifferentiation into fibroblast-like cells.[14] Fibrocytes, circulating cells derived from bone marrow stem cells that transform to fibroblasts in tissue, have also been found in PVR membranes, further evincing the robust cellular buildup in response to circulating growth factors.[15] It is even possible that genetic changes in the cytokine TNF alpha might predispose to PVR in patients with retinal detachment.[16]

The best way to prevent PVR is prompt successful repair of primary RRD. However, due to patient, ocular and surgical factors that are not always controllable, PVR continues to occur. A strategy to prevent PVR is to look for risk factors for PVR in eyes with RRD and to try to control or influence those risk factors.

Clinical factors associated with increased risk of PVR include, but are not limited to:

Operative factors associated with increased risk of PVR include

There is no current pharmacologic agent proven to treat or prevent PVR. A myriad of medical interventions have been considered for PVR and none have been proven conclusively to be superior to surgery alone.

Diagnosis of PVR is made via an in-depth patient history, i.e. evidence of longstanding primary RRD or of recent retinal reattachment surgery, and via physical examination, most importantly recognition of retinal detachment with fixed retinal folds. 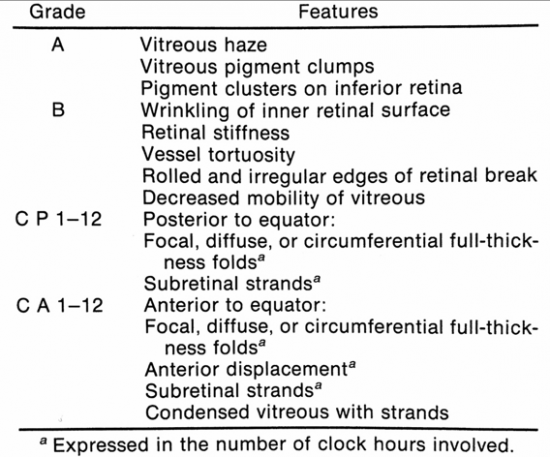 In practice, the revised system, most notably the use of clock hours as opposed to quadrants, in addition to the segregation of membranes into anterior and posterior, allows for better understanding of the pathology of individual cases and comparison of severity of PVR among different clinical studies of PVR. 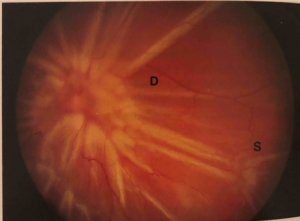 Patients presenting with PVR may be categorized into two groups: 1) those presenting with longstanding PVR arising from primary rhematogenous retinal detachment, and 2) those who have recently undergone surgical repair of RRD. In the case of the former, patients will present with prolonged vision loss often preceded by floaters and/or flashing lights. Patients presenting post-operatively may have initially had vision improvement following surgery, then progressive or rapid onset of vision loss. These patients often present 4-6 weeks post-operatively. The clinical presentation of PVR is defined by fixed folds in the retina on ophthalmic examination, indicative of retinal traction caused by retinal membranes. In the majority of cases, membranes localize to the inferior retina due to gravity.[43] Retinal folds may appear as billows in the retina and often co-present with haze and pigment in the vitreous. In the case of posterior PVR, there may be starfolds with folds radiating from a central area of contracted retina due to epiretinal membranes, more diffuse folds from larger membranes, or subretinal membranes that may look like clotheslines beneath the retina. These folds may even take an annular configuration pulling the retina over the optic disc. Anterior PVR most commonly involves the inferior retina, but in severe cases may extend 360 degrees. Membranes may be circumferential at or posterior to the vitreous base. With contraction at the posterior edge of the vitreous base, the anterior retina may be stretched centrally while the posterior retina is thrown into radial folds extending from the vitreous base posteriorly (Figure 3). 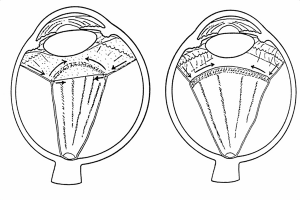 If the circumferential membranes involve the vitreous base, especially following prior vitrectomy, the retina posterior to the vitreous base may be pulled by the contracting membranes anteriorly toward the pars plana, ciliary body, or even the iris (anterior retinal displacement).

When assessing a patient for PVR, one should also consider a variety of other proliferative and contractional retinal diseases, in addition to other fibrosing conditions, including:

Rarely, a RRD without PVR can have extensive folds that falsely appear to be fixed. Seen mostly in highly myopic eyes with very thin retinas, the retina in this instance remains normally mobile on eye movement, no membranes are found at surgery and the retina completely flattens following surgery. 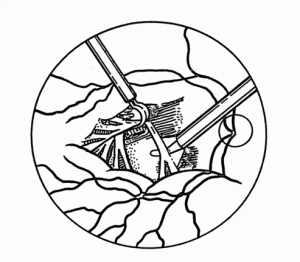 Illumination during membrane peeling can be provided by an illuminated pick (a fiberoptic light with an attached pick) or by a “chandelier” (a stationary fiberoptic light placed through another cannula at the pars plana). Peeling is usually started in the posterior retina and progresses anteriorly. In eyes with anterior PVR, membrane peeling can be difficult to adequately relieve traction. After posterior membranes are removed, perfluorocarbon liquid (PFCL), which is is heavier than water or saline, can be used to weigh down and stabilize the posterior retina to ease dissection of the mid peripheral membranes and the retina pulled anteriorly and adherent to membranes at the vitreous base or ciliary body. As a last resort, it is sometimes necessary to perform a relaxing retinectomy to relieve traction. The relaxing retinectomy is a circumferentially cut in the peripheral retina in the area of traction with excision of the devitalized retina anterior to the cut retina. Most relaxing retinectomies are done inferiorly where anterior PVR is most commonly found, but occasionally will extend 360 degrees. The retinectomy should be as anterior as possible to spare as much posterior, functional retina as possible and should almost always be in a circumferential direction. The retinectomy is usually done with the vitrectomy instrument after marking the area and ensuring hemostasis with endodiathermy. The retinectomy should extend beyond the abnormal area on both sides, otherwise retina may not settle and there will be risk of subretinal air or perfluorocarbon liquid. After all traction is relieved by membrane peeling and, if necessary, a peripheral retinectomy, the retina is usually reattached with PFCL. After reattachment, PFCL can be exchanged for a gas. Laser treatment delivered through a fiberoptic probe (endolaser photocoagulation) is used to treat all retinal breaks and usually to place a laser barrier 360 degrees around the peripheral retina (over the scleral buckle if present) and can be performed through PFCL or a long-acting gas. The benefit of FAX prior to laser is to flatten the anterior detached retina prior to laser. The view can be challenging sometimes through air and then the decision to laser under PFCL is made. However, air can provide a wider angle and improve the visualization of the anterior retina and also be helpful. The PFCL or air is replaced by long-acting gas (usually perfluoropropane [C3F8] gas) or silicone oil. For primary PVR in which the eye has not had a prior vitrectomy, C3F8 gas or silicone oil are equally effective. In eyes with prior vitrectomy for PVR and those with a large peripheral retinectomy or with a giant retinal tear more than 90 degrees in circumference, silicone oil may be more effective.

Close surgical follow-up is critical to successful surgery for PVR. Major concerns in the early postoperative period include

Any of these complications can cause permanent vision loss in an eye that has had a successful repair of the retinal detachment, so early and frequent surgical follow-up is necessary to identify and treat early complications.

Recurrent retinal detachment can occur either early or late. Early detachment following surgery usually means that there was inadequate relief of vitreoretinal traction and/or retinal breaks were missed at surgery. Late recurrence of retinal detachment usually indicates that there has been recurrence of proliferative membranes and/or new retinal breaks have formed. Some early retinal detachments can be managed with laser treatment and possibly additional gas injection (in eyes managed with gas at the time of surgery); however, most recurrent retinal detachments will require additional surgery. Glaucoma that cannot be managed medically may require surgical management and severe corneal opacification may need corneal transplant. Hypotony can occur in up to 15-24% of cases following surgery for PVR and is difficult to treat. A search for a treatable cause such as cyclodialysis cleft is warranted and some cases will improve with topical corticosteroids, but most cases will persist, often with vision loss. Ultrasound biomicroscopy may be performed to look for ciliary body atrophy/detachment or cyclitic membrane over the ciliary body.

With current surgical techniques, most eyes with PVR can now be reattached. However, despite recent advances, visual results of surgery for PVR remain poor. For example, Pastor reports that in 40-80% of anatomically successful cases, patients will maintain only ambulatory vision, defined as vision 5/200 or better.[45] Such a prognosis is largely a function of post-operative abnormalities, e.g. macular edema, macular pucker, subretinal membranes, optic atrophy, retinal atrophy, etc.[46] In addition, many eyes will retain silicone oil long after surgery with the possibility of late visual loss associated with chronic retention of silicone oil. Narala et al. recommend a more stringent definition of success following surgery for PVR that includes retinal reattachment, ambulatory vision, and silicone oil removal versus simply anatomical success.[47]