Primary vitreoretinal lymphoma (PVRL) is the name given to primary central nervous system lymphoma (PCNSL) when its initial or primary manifestation is in the eyes. In this article the more general term, PCNSL will be used as the article summarizes material from both the ophthalmic and CNS literature. PCNSL is generally a high grade diffuse large B cell lymphoma. The principle treatment involves systemic chemotherapy.

Lymphoma is a malignant neoplasia of white blood cells of lymphocytic origin. Lymphomas may be derived from B or T lymphocytes, but the lymphomas that affect the eye are primarily of B cell origin.

a subgroup of lymphoma that characteristically involves the brain, eyes, and leptomeninges, without other systemic involvement. Again, this is most commonly a B cell lymphoma, but rare cases of T cell PCNSL have been reported. This lymphoma is a high grade lymphoma, and is generally classified as a Diffuse Large B cell Lymphoma (DLBL). This type of lymphoma will be covered in this article

Although there are reports of infectious agents being associated with PCNSL in non-immunocompromised patients (HHV-8, EBV), there is more compelling evidence of a viral mechanism (EBV) in AIDs associated PCNSL.

The majority of patients with intraocular lymphoma will present with anterior or posterior uveitis. In one of the larger series of intraocular lymphoma, 75% of patients presented with either anterior or posterior uveitis. In this same series, the pathognomonic feature of PCNSL, sub RPE infiltrates was present in only 20% of patients. At times, the keratitic precipitates associated with PCNSL will have a branching, dendritiform appearance.

Sub-RPE infiltrates are the most distinct feature of PCNSL. These infiltrates are due to the accumulation of atypical lymphoctyes beneath the RPE. These infiltrates vary in thickness and size. They are usually, but not always, accompanied by cells in the vitreous cavity. Even without treatment, these subretinal infiltrates may come and go. When they resolve after being present for some time they typically leave an area of geographic atrophy. 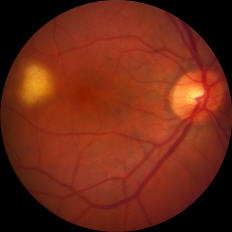 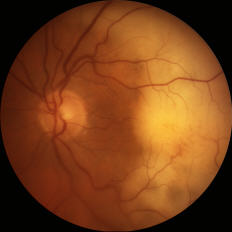 In some patients, atypical lymphocytes will accumulate within and around the retinal vessels. The resulting vascular compromise gives the clinical appearance of ischemic retinopathy. Cases presenting in this fashion are often misdiagnosed as viral retinitis.

PCNSL should be suspected in any patient with posterior uveitis that has a negative workup for common causes of posterior uveitis. PCNSL is often partially responsive to oral or periocular steroids, but will tend to recur or worsen after an initial response. Consequently, PCNSL should be considered in patients with this clinical course. When PCNSL is considered the diagnosis may be confirmed in a variety of ways: cytology, immunophenotyping, assessing for gene rearrangement, and assaying for cytokines in ocular fluids.

Cytology of cells removed from the vitreous or aqueous is the most common method for making a diagnosis of PCNSL. The atypical cells that are present in this disease have a characteristic appearance, as they are larger than normal lymphocytes, and have nuclear features that are typical for lymphoma. The atypical cells usually occur intermixed with normal inflammatory cells, so the cytologist must look for a subpopulation of cells with the features of lymphoma. In addition to the normal and atypical lymphocytes there is often a population of necrotic cells. The presence of these necrotic cells is often a clue that the cellular infiltrate is due to lymphoma rather than a benign inflammatory process.

Immunophenotyping is a powerful technique to characterize cells removed from the vitreous on the basis of the presence of identifiable surface proteins. For example, the cells can be identified as B or T cells, and the number with kappa or lambda light chains can be identified. This information complements the findings on cytology, and can help confirm that there is a subpopulation of atypical cells that exhibit “clonality”, i.e. all share the same surface light chain.

This technique, like immunophenotyping is helpful in identifying clonality within the cells removed from the ocular fluids. Whether to use immunophenotyping or gene rearrangement studies depends on the experience of a particular pathology laboratory; some labs use both. Cytokine Ratios: Assay of the amounts of interleukin 6 (IL6) and interleukin 10 (IL10) have been used to distinguish benign intraocular inflammatory conditions from PCNSL. In benign infiltrates the IL10:IL6 ratio is typically less than 1, whereas in PCNSL it is typically greater than 1. There is some overlap between the different types of infiltrates, and some variation in ratios obtained in different laboratories; however, this ratio may be useful in initial diagnosis and in follow up for recurrences.

In addition to the diagnostic testing described above, other testing is useful to help in the staging of the lymphoma. Neuro-imaging is indicated in all patients with primary vitreoretinal lymphoma as there is a high likelihood of CNS involvement either at the time of the initial recognition of ocular involvement, or subsequently. In addition, patients should also have cerebrospinal fluid cytology as leptomeningeal involvement may be present even in the absence of a detectable CNS parenchymal lesion. As other forms of systemic diffuse large B cell lymphoma may affect the eyes and CNS secondarily, physical examination, bone marrow examination and imaging may be indicated in some patients.

As mentioned above, retinal or vitreous involvement alone or in combination with brain or leptomeningeal lymphoma is primary central nervous system lymphoma, a sub type of Diffuse Large B cell Lymphoma (DLBL). This is a high grade lymphoma that is treated with systemic combination chemotherapy. Treatment of the eye involvement should be done in conjunction with a Neuro-Oncologist or a Medical Oncologist. Prior to institution of therapy, patients should undergo a staging evaluation to document the extent of involvement. This should include lumbar puncture and neuro-imaging to define the extent of disease at presentation.

There are a variety of chemotherapy regimens for DLBL, but the vast majority of these include high dose methotrexate in combination with other agents. Increasingly, rituximab, a chimeric antibody that recognizes and induces apoptosis in CD20 positive cells (B-cells), is used in the chemotherapy regimen for patients with DLBL. CNS involvement develops in 80-90% of patients that initially present with vitreous and retinal involvement, so systemic therapy should be strongly considered even in the treatment of patients that have only eye disease at initial staging.

As mentioned above, ocular therapy should be considered in the context of what type of systemic therapy is being delivered to the patient. If the patient is receiving high dose systemic chemotherapy the eyes may be observed for response. Many systemically administered agents reach therapeutic levels in the ocular fluids, so if the intraocular involvement responds to systemic therapy, no additional treatment needs to be administered. If the ocular involvement does not respond to systemic therapy, chemotherapy may be administered by intravitreal injection. The two most commonly utilized agents are methotrexate and rituximab. These two agents appear to be well tolerated with minimal drug related toxicity. When treating in combination with systemic therapy, it is logical to treat the eyes with the intent to induce a complete remission. This can be achieved in an extremely high number of patients with methotrexate alone or in combination with rituximab.

There is a high percentage of patients for whom the medical or neuro-oncologist will elect not to treat with systemic chemotherapy. In many elderly patients with no brain or leptomeningeal involvement the side effects of therapy may be considered to outweigh the benefits of treatment in the absence of the life-threatening manifestations of the disease. In this setting the treating ophthalmologist must decide whether to treat the eyes alone. This decision should rest on the patient’s visual symptoms, and the threat the ocular involvement poses for permanent vision loss. If the vitreous infiltrate is sufficiently dense to lower vision, vitrectomy will generally return vision to a near normal level. Intraocular chemotherapy is also effective in clearing the vitreous of cells, resulting in visual improvement. If there are extensive subretinal infiltrates, particularly if they threaten the fovea, the use of intravitreal chemotherapy is generally effective in eliminating the infiltrates. Also, in settings of ischemic retinal or optic nerve disease, the use of intravitreal chemotherapy is effective in removing the cells from the vitreous and retina.

Radiation therapy is currently used much less frequently than in the past. Whole brain radiation in conjunction with chemotherapy in older patients is now recognized to be associated with a high incidence of severe dementia, and little improvement in survival compared to chemotherapy alone. Use of radiation to the eyes of patients with ocular involvement can be considered, but the dose used for treatment will be associated with a substantial risk of radiation retinopathy and will result in some radiation to the brain as well as the eyes.

Gene expression studies indicate that PCNSL is a distinct type of DLBL, differing in some aspects of gene expression from the better known germinal center cell and activated B-cell subtypes. The 5 year disease free survival rates are very different in these two forms of DLBL: 70% survival for germinal center cell type, and 30% for the activated B-cell type. Gene expression studies and survival rates for PCNSL are much more like the rates seen in the activated B-cell type, indicating that PCNSL has a poorer prognosis and that it is very likely that there will be recurrence of disease at some time following initial treatment.

With systemic chemotherapy alone or in combination with intraocular therapy, there is a high risk of recurrent disease, so patients need to be followed indefinitely for signs of recurrence. The 5 year survival data for primary CNS lymphoma is now over 3 years in multiple clinical series in which the principle therapy is systemic chemotherapy. This is a dramatic improvement over earlier series in which survival was on the order of 1 year with radiation.