While Oestrus ovis, or the sheep botfly, is the most common cause of human ophthalmomyiasis, several other offending species have also been identified, including the human bot fly (Dermatobia Hominis) latrine fly (Fannia), house fly (Musca domestica), and cattle botfly (Hypoderma).

The female O. Ovis retains her eggs within her body until they hatch, and then typically deposits her larvae into the nostrils of sheep and goats. When they occur in the human eye, larval infections are usually restricted to the conjunctiva and cornea. O. ovis infections have also been reported in the human nose and pharynx. Larvae do not typically survive long enough in humans to develop into their final stages. Intraocular penetration of larvae, or ophthalmomyiasis interna, is less common worldwide than ophthalmomyiasis externa. In the United States, most reported cases of ophthalmomyiasis interna have been caused by the rodent botfly larva of the Cutebara and Hypoderma species. Larvae have been found in the anterior chamber, the vitreous, and the subretinal space. In the latter case, it is thought that the larva travels through the subretinal space, leaving white tracks in the RPE (retinal pigment epithelium). The larva may subsequently enter the vitreous. When the larva dies within the subretinal space or in the vitreous, it may result in intraocular inflammation.

Ophthalmomyiasis typically occurs in shepherds and farmers in rural areas but has also been reported in urban areas and in patients without close animal contact. Other reported risk factors include eye infections, ocular wounds, advanced age, debilitation, lack of nutrition and care, and poor general health. Cases of ophthalmomyiasis have been reported in countries around the world, including Afghanistan, Pakistan, the Caribbean, Kuwait, Iraq, Libya, Tunisia, Russia, India, The United States, and Canada.

In the case of ophthalmomyiasis externa, the slit lamp exam may reveal small translucent larvae up to 5mm in length on the conjunctiva. The patient may have evidence of mucopurulent conjunctivitis, or rarely, corneal ulcer. Larval tracks are often apparent in cases of ophthalmomyiasis interna. The larva may even be visible on biomicroscopy in the anterior chamber, subretinal space, or in the vitreous. OCT (optical coherence tomography) imaging through the tracks has revealed subretinal hyporeflective areas which may be suggestive of subretinal tunnels. 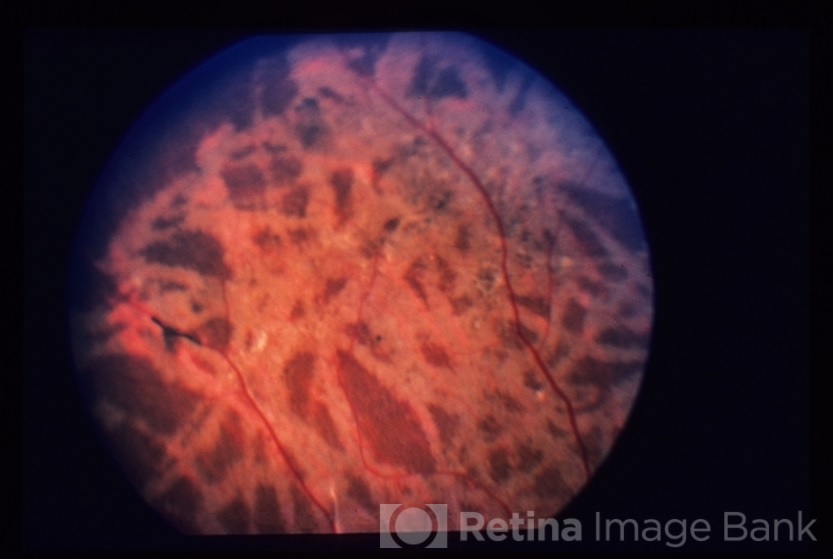 The mainstay of treatment for ophthalmomyiasis externa is the removal of the larvae, often at the slit lamp, with topical analgesics and antibiotics. Removal of the larvae may be difficult due to their strong attachment to tissue using their oral hooks and body spicules. Although one successful case of treatment with ivermectin has been reported, antihelminthics have not commonly been used in the treatment of ophthalmomyiasis externa. Interestingly, ivermectin has shown benefit as a therapy and a prophylactic treatment for bot fly infestation of livestock.

In cases of ophthalmomyiasis interna, immediate photocoagulation is recommended, if the organism can be identified, in order to prevent further mechanical damage from the burrowing larva.

If the larva is in the macula, it has been suggested to use the bright beam of an indirect ophthalmoscope to herd the organism into an area that can be safely treated by photocoagulation. Larva within the vitreous has successfully been targeted by YAG laser. Whether the organism dies naturally or by laser treatment, the patient is at risk for a significant inflammatory response. Therefore, careful monitoring and prompt treatment of inflammation with topical, intraocular, or systemic immunosuppression, as appropriate, is essential. When photocoagulation is not possible, pars plana vitrectomy can be considered to remove the organism in its entirety. While commonly used in the treatment of diffuse unilateral subacute neuroretinitis (DUSN), antihelminthic medications have not been reported in the treatment of ophthalmomyiasis interna.