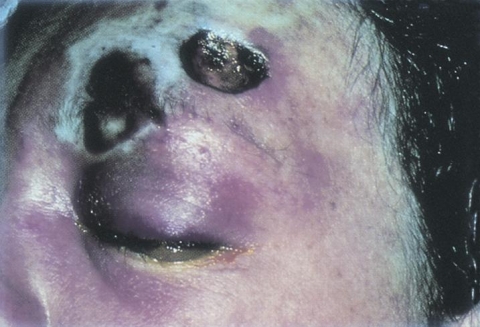 Mucormycosis, a subtype of a larger category of diseases known as zygomycoses, is an aggressive opportunistic infection which tends to show a proclivity for the rhino-orbital tract[2] While rhino-orbital mucormycosis is typically associated with Rhizopus species, a number of other species have also been implicated, including Mucor, Rhizomucor, Absidia, Apophysomyces, Saksenaea, Cunninghamella, Cokeromyces, and Syncephalastrum.[3]

Rhino-orbital mucormycosis tends to affect specific patient populations. It is most often associated with diabetes mellitus (type 2 more frequently than type 1, especially with a history of diabetic ketoacidosis). Other associated conditions include neutropenia, hematologic malignancy, chronic steroid or immunosuppressive drug use, history of transplant, and history of multiple blood transfusions.[2] [4]

Initial symptoms of sinus-involving mucormycosis are consistent with acute or chronic sinusitis; congestion, blood-tinged secretions, rhinorrhea, headaches, fever, and malaise. Findings of pre-septal cellulitis (soft tissue swelling, eyelid edema/erythema, and conjunctival injection) are also possible. Involvement of the orbit is heralded by findings of chemosis, proptosis, extra-ocular motility deficits, multiple cranial neuropathies (namely CN III, V-1, V-2 and/or VI secondary to cavernous sinus involvement/thrombosis), and loss of vision. Involvement of the contralateral eye can be an indication of extension, namely via the cavernous sinus. Development of neurologic findings such as mental status changes, seizures, or other focal neurologic deficits can indicate intra-cranial extension. [5][6][7]

In addition to identification of the above clinical signs and symptoms, imaging can be helpful in diagnosis. Contrasted computed tomography (CT) of the orbits and/or paranasal sinuses can show contrast-enhancing hypodense soft-tissue thickening of the involved sinuses, most commonly the ethmoid and maxillary sinuses. Magnetic resonance imaging (MRI) can show T2 iso-intense to hypo-intense soft tissue thickening and heterogenous post-contrast enhancement. Bony erosion is less common but can occur.[8] Diffusion-weighted images can show increased intensity in the affected areas secondary to restricted diffusion from infarcted mucosa.[9] Direct visualization of the nasal mucosa and para-nasal sinuses can reveal dark, necrotic tissue and a characteristic black eschar which results from vascular invasion and tissue infarction.[10]

Definitive diagnosis of mucormycosis can be made via histopathologic evaluation of tissue via biopsy or scraping. Staining of biopsy specimens with calcaflour white, periodic-acid Schiff (PAS), or Grocott-Gomori methenamine-silver stains demonstrates broad, irregular, non-septated hyphae branching at 90 degrees, which are pathognomonic for mucormycosis[11].

Early recognition and initiation of appropriate treatment is of paramount importance with regards to outcomes. Urgent correction of underlying metabolic derangements such as hyperglycemia and metabolic ketoacidosis and tapering of corticosteroids or immunosuppressive medications should be pursued if possible. The mainstay of medical treatment remains intravenous anti-fungals, namely lipid-soluble amphoteracin-B at a dose of 5-7.5 mg/kg/day.[12] Although older formulations of azole antifungals (fluconazole, voriconazole) have shown no efficacy in treatment of mucormycosis, recent studies have shown some success with posaconazole as a second line agent or in combination with amphoteracin.[12] Additionally, recent case reports have detailed the use of adjunctive intra-orbital irrigation with amphoteracin-B (5mL of 1mg/ml daily for 7 days) in additional to intravenous therapy. Though successful outcomes have been described, there is a paucity of large trials studying this treatment modality and its outcomes compared to the current treatment standards.[13]Finally, hyperbaric oxygen (100% oxygen saturation at 2.5 - 3 ATA) and iron chelation therapy have both been described in the literature as possible adjunctive treatment modalities.[14]

Due to the vascular compromise and tissue necrosis associated with local angio-invasion, intravenous anti-fungal agents tend to have poor tissue penetration. Early surgical debridement of involved tissue, therefore, must be pursued. Evidence suggests that patients who do not undergo early surgical debridement had significantly higher mortality rates than those who did.[15] No clear guideline exists to define the extent of debridement. Extending debridement until freshly bleeding, viable tissue is encountered is a generally accepted principle. Additionally, the use of intra-operative frozen sections to determine if clear margins have been achieved can be useful.[10][16]

Rhino-orbital mucormycosis is a grave disease with significant mortality rates, with some published studies reporting mortality rates of up to 80% or more if untreated.[3] Even with prompt treatment, the prognosis remains guarded. In a series of 929 patients published in 2005, the survival rates for patients treated with amphotericin alone, surgical debridement alone, and both amphotericin and surgical debridement were 61%, 57%, and 70%, respectively.[2] Delay of treatment has been well correlated to poor outcomes, with one study showing a significant difference in survival between patients with a lag time to treatment of 7-12 days (63%) vs patients with lag to treatment time of 13-30 days (44%). Another study reports survival rates of 85% in patients with a lag time of 3-9 days versus just 55% in patients with a lag time of 10-45 days. Development of hemiplegia, facial/eyelid gangrene, and cerebral invasion were all associated with a poor prognosis.[5]

Rhino-orbital mucormycosis is an aggressive invasive fungal infection which tends to affect patients with a history of diabetes (especially with ketoacidosis), chronic steroid use, and immunosuppression. Early recognition of symptoms and prompt initiation of treatment, both with intravenous antifungal agents and aggressive surgical debridement are crucial to improving clinical outcomes, though the prognosis for patients with this disease remains guarded even with rapid recognition and early treatment