Medial canthal tendon (MCT) avulsion refers to an eyelid injury where the entirety or part of the length of the eyelid involving the medial canthus has been torn from its normal anatomical position.[1] 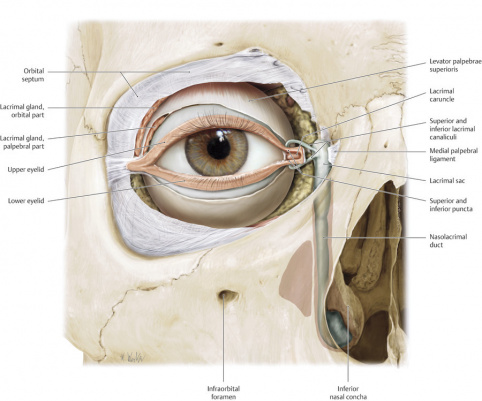 The medial canthal tendon closely surrounds the lacrimal drainage system. The MCT anatomy is complex and a thorough understanding of the anatomy allows for the surgeon the best opportunity for successful repair of the MCT. The MCT supports the medial canthus, positions the eyelid and the globe, and plays a role in the functioning and support of the lacrimal system.

The upper and lower eyelid puncta overlie the canaliculi, which travel 2mm vertically, then 8 to 10mm horizontally and medially within the orbicularis oculi muscle. In >90% of individuals, the upper and lower canaliculi converge to form a common canaliculus (about 3 to 5mm long) before entering the posterolateral wall of the nasolacrimal sac.

Some sources have discussed a superior limb of the MCT and that the MCT is a tripartite structure with anterior, posterior, and superior limbs.[3] In cadaver dissections initially described by Jones et al[5] and then later Anderson[4], there is a superior branch of the MCT which inserts on the frontal bone. It is thought that this superior limb, in addition to the anterior limb, firmly supports the eyelid from malposition. Anderson describes that posterior portion of the MCT as a very thin and weak structure, and it is likely that the superior branch plays a larger role in supporting the position of the eyelid relative to the posterior limb.[4]

Damage to the eyelid commonly occurs secondary to blunt trauma, animal (dog) bites, motor vehicle collisions, falls, or assault with horizontal or lateral traction to the eyelid leading to shearing of the lid generally medially. This is especially common in naso-orbitoethmoidal fractures. Additionally, iatrogenic injuries can occur during oculoplastic or otolaryngology surgery, such as during dacryocystorhinostomy or after surgical resection of periocular tumors. These injuries can cause avulsion at the posterior limb of the medial canthal tendon, which is relatively weak against lateral tractional force.[7] The lower eyelid is more commonly damaged than the upper eyelid.[8] Damage to the medial canthal tendon can also occur in malignant tumor resections.

The diagnosis of a MCT avulsion is a clinical diagnosis. Generally it is seen with lacerations of the medial lower eyelid, though fractures can impact the MCT without a laceration. Concurrent injury of the canaliculi is also common and should be carefully evaluated.

Asking a careful history with a thorough understanding of the mechanism of injury is important, as there may be damage to deeper or underlying structures. Any injury to the upper medial face (including the brow, nose, or cheek) should raise suspicion for possible MCT trauma. 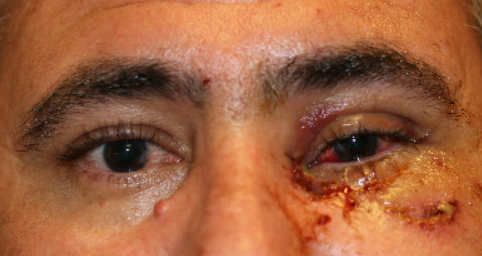 This is a 40-year-old patient who was assaulted after leaving a party. He suffered multiple facial fractures including a left Type 2 naso-orbitoethmoid (NOE) and orbital floor fracture. On exam, there was a non-marginal eyelid laceration (repaired in this photo) without injury to the canaliculi (confirmed with irrigation). There is evidence of left medial canthal dystopia, telecanthus, esotropia, and hypoglobus. Photo courtesy of Drs. Nahyoung Grace Lee and Victor Liou

Patients may present with malpositioned eyelids, telecanthus, epiphora (if the canalicular system is involved), pain, decreased vision (given eyelid position).

The diagnosis of a medial canthal injury is largely clinical and dependent on the physical exam (see above).

Computer tomography (CT) imaging without intravenous contrast is the best method to evaluate the extent of the injury and note if there is a concurrent bony injury. Contrast is not needed to identify fractures on a CT scan. Magnetic resonance imaging (MRI) is contraindicated as the initial study in cases of trauma given concern for any ferromagnetic material; furthermore, it is time consuming and expensive relative to CT imaging.

Prompt evaluation of globe and surrounding structures by an eye specialist, such as an ophthalmologist or ophthalmic plastic and reconstructive surgeon, is necessary in cases of trauma. The main goal of restoration of the medial canthus is to retain normal eyelid function, support the lacrimal drainage system, and protect the globe.

In cases of trauma, patients need updated tetanus vaccination if they have not received it within the last ten years. Routine coverage with oral antibiotics is controversial. In cases of bite wounds which are typically polymicrobial infections, antibiotic coverage with Augmentin is generally recommended.

Immediate surgical intervention is not necessarily required in cases of trauma. Repair within the first 24-48 hours is ideal, though there has been evidence that there can still be acceptable outcomes even beyond 48 hours. Repair is performed in an operating room with general anesthesia.

First, if the canalicular system is involved, then intubation is undertaken with bicanalicular crawford-style lacrimal stents, mono-crawford, or mini monoka stents, as described here. The bicanalicular stent provides posteromedial traction, which helps for reapproximation of the medial canthal tendon complex.

Once intubation of the canalicular system has been performed (if the lacrimal system is involved), then the MCT should be repaired next. Traditionally canthopexy has been advocated for surgical repair of the MCT which involves subperiosteal exposure and fixation to the bony attachment.[7] If the MCT is severed and both ends of the tendon can be identified, a non-absorbable suture such as 4-0 polyester suture can be placed using a horizontal mattress.  If the periosteum is intact but the distal end of avulsed MCT cannot be identified, a 5-0 braided multifilament absorbable suture can be placed through the periosteum of the medial wall and the canthal tendon.[11] If there is complete avulsion of the MCT, then a microplate can be used to fixate the MCT to bone.[11]  A transnasal wire can also be utilized to achieve satisfactory positioning.[12] Use of a transnasal wire requires surgical access to the normal contralateral medial canthus. A burr is used to make a 5 to 7mm hole superiorly and posteriorly to the horizontal insertion of the MCT, and a transnasal wire is passed through.

2 weeks status post repair of complex facial fractures including repair of orbital floor fracture with a Medpor Titan implant and open reduction internal fixation of a Type 2 NOE fracture. The NOE repair involved placing a 4-0 vicryl suture through the medial canthal tendon which was then suspended on screws attached to a 1.5 mm titanium plate along the superomedial orbital rim. This maneuver distracted the medial canthus in a superior and posterior direction, back to its anatomic location. Photo courtesy of Drs. David Shaye, Nahyoung Grace Lee and Victor Liou.

However the above technique has been noted to be surgically demanding and time consuming. The periosteum is very thin over the posterior lacrimal crest which can make repair technically difficult. Furthermore, the lacrimal sac is encased in fascia in close proximity and is thus at high risk of accidental damage during repair.[3]Complications with transnasal wiring including medial canthal drift, wire extrusion, contralateral orbital bone fracture from the transnasal wire pressure.[13]

Other techniques have been described for reattachment of the MCT to the orbital medial wall. Okazaki et al.[14] describes the Mitek anchor system as an alternative to medial canthal tendon fixation. This technique uses a screw hole that is drilled into the orbital medial wall, and a suture is threaded into the head of the anchoring device to push the anchor into the hole directly. The sutures are then sewn to the stump of the medial canthal tendon for fixation onto the bone.[14] In cadaver studies, it has been described to have 97% of the holding strength of the contralateral MCT.[15] Potential drawbacks to this technique is that the anchor can be difficult to remove .[16]  Kakudo et al.[16] describes another anchoring system called the Caraji Anchor Suture System. This Caraji Anchor Suture system fixates the MCT by using self-tapping screws and an exclusive driver.  The self-tapping screw is able to create holes for fixation and the bone fixation point can be corrected if needed.[16]

Turgot et al[17] described utilization of a unitransnasal canthoplasty to repair the MCT. This technique creates 2 drill holes in the periosteum matching the MCT attachment point. 2 nonabsorbable sutures were passed through these drill holes and tied from the ipsilateral nasal ostium, and then needles were passed through the canthal tendon.  Advantages to this technique is that it is relatively easy, cheap, does not injure the opposite nasal bone, and does not require additional equipment. However, this study only included two patients, though both patients who underwent this procedure had good surgical outcomes.[17]

Other methods propose that MCT reconstruction may not necessarily be needed if the canalicular system is repaired. In cases of combined eyelid avulsion and canalicular injury, placement of a bi-canalicular Crawford stent without reconstruction of the  MCT has been noted to create good tissue alignment and cosmetic outcome.[3] Intubation with the crawford stent allows for traction medially and posteriorly to help maintain the positioning of the eyelid without the placement of a medial traction suture (35 out of 37 patients in this study).[3] Good outcomes were noted in this study with little epiphora and ideal cosmetic results.

Following repair of a canalicular laceration, the stent is kept in for a minimum of six weeks, though can be left for longer (4-6 months) if it is not causing any issues or discomfort to the patient. The stent can be removed from a nasal or ocular approach, depending on the stent used and if there was fixation such as to the nasal mucosa or through the inferior turbinate.

After repair, the patient is typically given antibiotic ointment and possibly oral antibiotics if needed. For post operative visits, patients are generally seen at week 1, week 4-6, with more long-term follow-up as needed. Patients can be expected to experience some mild bruising, swelling, and pain postoperatively and may have initial epistaxis.

It is important to discuss possible complications with patients that can occur post surgical repair. As with any ophthalmic procedure, there is risk of bleeding, infection, pain, or loss of vision. Other possible complications more specific to MCT repair include scarring due to poor healing, poor cosmetic outcomes, telecanthus, epiphora, ectropion, stenosis of the nasolacrimal system, or iatrogenic trauma to the undamaged canaliculus. Patients with postoperative complications may require additional surgery.

In general, most patients who undergo prompt surgical repair of MCT avulsions have good functional and cosmetic outcomes.