Rhegmatogenous retinal detachment (RRD) is defined as the separation of the neurosensory retina from the retinal pigment epithelium (RPE) secondary to a ‘rhegma’ or break. The macula is the central 5.5 mm circular area inside the temporal vascular arcades and contains the fovea in the central 1.5 mm which is responsible for the central vision. 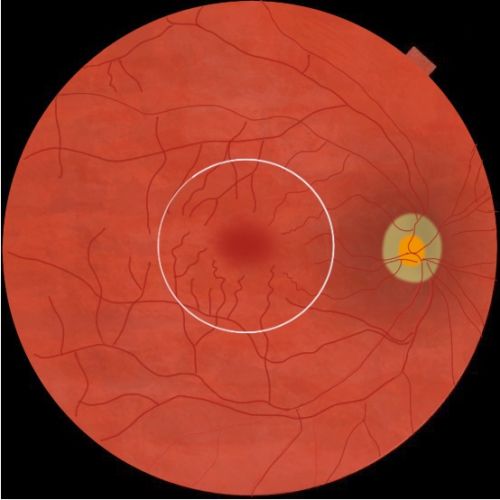 Subretinal fluid under the macula indicates some degree of damage despite reattachment.

The macula is a significant factor in determining final visual outcomes and should be considered in the timing of surgical repair. There is a higher probability of achieving better visual outcomes in macula-on rhegmatogenous retinal detachments. [1] 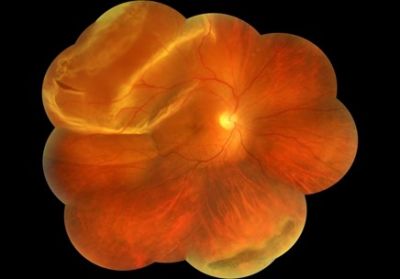 Fundus photo of the left eye of a superotemporal retinal detachment with 'Macula - on'. Image Courtesy: Sankara Nethralaya, Chennai

Progression of retinal detachment occurs due to the forces on the retina by the ocular and head movements, and gravity.

The following characteristics have a greater chance of progression to involve the macula:[3][4]

•Subretinal fluid within 1 disc diameter of the fovea,

•Equatorial tears have a greater chance of progression than tears at the ora serrata.

The symptoms of RRD include flashes, floaters, and a curtain-like shadow over the visual field.

Visual acuity is usually normal in cases of macula-on retinal detachment though the visual acuity may be reduced due to multiple causes including cataracts and vitreous hemorrhage.

Detailed dilated fundus examination with an indirect ophthalmoscope and scleral depressor should be done as there may be multiple retinal breaks. The crucial points include:

Optical coherence tomography can help rule out subclinical subretinal fluid at the fovea.

It is imperative to counsel the patient about the importance of early surgery as macula on retinal detachments have better visual outcomes. Urgent physician fitness needs to be obtained and surgery should be done as early as possible, especially in superior bullous retinal detachments. Other pre-operative steps to be taken include bed rest, bilateral patching of the eyes, and positioning of the patient.

Bed rest may help in restricting the forces related to head and ocular movements.[5] By positioning the globe with the retinal break in the most dependent position, alteration of the vitreous body is obtained such that there is vitreous occlusion of the breaks. There is simple descent of the retina due to gravity and passage of the subretinal fluid from the subretinal to the retrovitreal space via the retinal hole. Large eye movements increase vitreous traction and detachment forces on the edge of the retinal hole, creating a subretinal vacuum and facilitating increased subretinal fluid. Bilateral patching 24-48 hours before surgery may decrease saccadic ocular movements and reduce inertial force induced by ocular movements thus decreasing the height of retinal detachment and preventing macula on retinal detachment from converting to macula off retinal detachment. However, many vitreoretinal surgeons do not advocate this because of the practical difficulties of bilateral patching.

For temporal and nasal retinal detachments:

Depending on the extent of retinal detachment and location of retinal breaks, management can be:

Delimiting laser photocoagulation can be used in subclinical retinal detachments that extend at least 1 disc diameter from the nearest break and no more than 2 disc diameters posterior to the equator with no visual field loss.[7] It helps by forming a barrier to prevent further extension of subretinal fluid. It is less invasive, inexpensive, and an outpatient procedure and is preferred in young patients in whom the vitreous is not liquified or when the patient cannot be operated on due to other reasons. At least 2-3 rows of confluent laser spots should be applied around the RD. However, it is important to closely monitor these patients. The anterior edge of the barrage laser must surround the RD or reach the ora serrata. If the laser is difficult, the anterior edges of the barrage laser can be connected to the ora serrata with cryopexy spots. 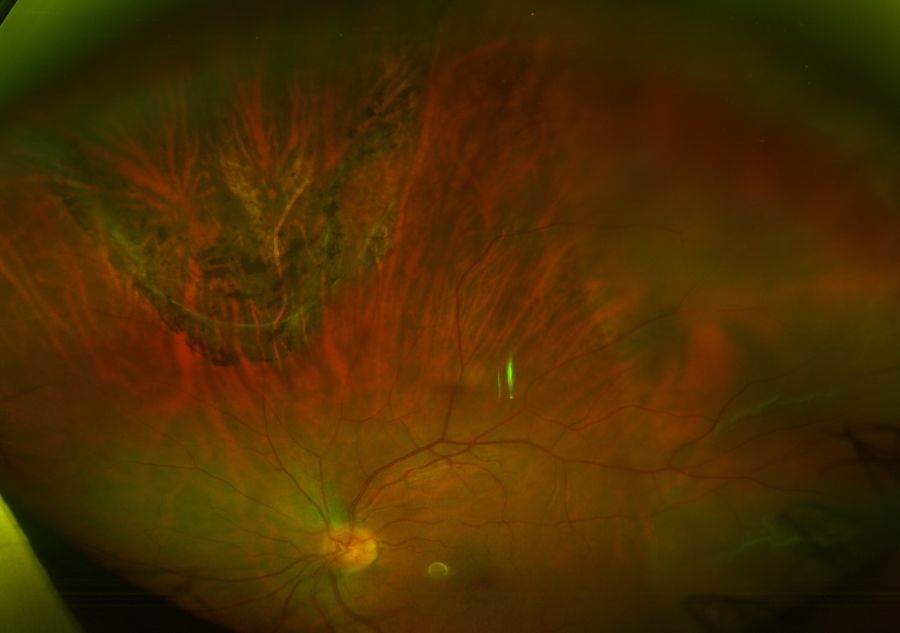 Pneumatic Retinopexy is the injection of a gas bubble into the vitreous cavity and serves as an alternative to more invasive surgical interventions in certain cases of retinal detachments.

The common indications include:[8]

•No or minimal media opacity and all the breaks should have been identified.

•Patient should be able to maintain positioning for 5-8 days after the procedure.

If there is a bullous subretinal fluid that is almost extending to the macula (Figure A), placement of a bubble against the bullous detachment in a sitting position may cause a macular detachment as the bubble presses the superior retina and the subretinal fluid progresses and increases the area of RD (figure C).

This is avoided by maintaining a face-down position (B) which enables the bubble to traverse the attached retina en route to the macula. This frequently causes subretinal fluid to pass through the break into the vitreous. Gradually over some time, the head position is changed to bring the retinal break to the uppermost position.

The bubble then rolls towards the break pushing the subretinal fluid away from the macula back into the vitreous and flattening the retina (D). 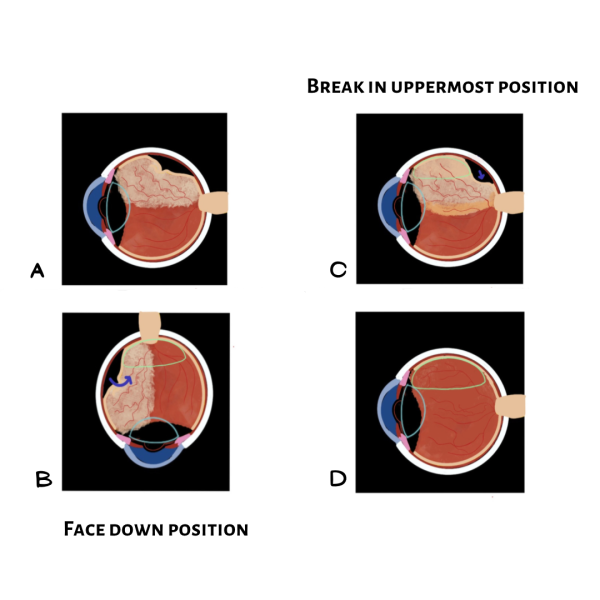 The macular status does not necessarily play a role in the choice of surgery.

The surgical options are scleral buckling or vitrectomy, and this depends on multiple factors. The goal in either surgery should be to keep the macula attached intra-operatively.

The aim of scleral buckling surgery for the macula on retinal detachment is to prevent subretinal fluid from tracking under the macula. This is possible by external drainage of the subretinal fluid and/or the use of gas with initial prone positioning (steam roller technique). Scleral buckling is preferred in retinal detachment due to lattice with holes or retinal dialysis in a young individual.

If vitrectomy is the preferred surgical procedure, certain modifications can be made to prevent the conversion of the macula on to macula off retinal detachment intra-operatively.[9] Valved cannulas should be used to avoid undue vitreous escape from the port and thereby pulling the detached retina. It helps to prevent intraocular pressure fluctuations during surgery and avoid the turbulence of the fluidics. This can prevent the retina from becoming bullous intraoperatively. If the retinal detachment is bullous, in an eye with a large open break, select an infusion site that allows avoiding infusing fluid through the break under the retina which can make the detachment more bullous and cause extension into the macula. In bullous retinal detachment, initially, a drainage retinotomy can be made and subretinal fluid may be aspirated using the extrusion cannula so that the subretinal fluid reduces and the retina becomes less bullous and less mobile. If the plan is to drain fluid through a primary break, a sclerotomy site in the meridian of the tear can be selected for easier access. Avoid instruments exiting and entering the eye frequently during vitrectomy as this increases the turbulence inside the eye and the RD becomes more bullous. In very bullous retinal detachments, the cannulas may go subretinal and special care is needed to avoid this. Specifically, the infusion cannula must not be placed subretinally as this makes the RD very bullous and surgery becomes very difficult. In such cases, the infusion cannula must be shifted to another place and the intravitreal location of its tip must be ensured before the infusion is turned on. Low suction and high cut rate are preferred to not cause any linear extension of retinal breaks.

Once the vitreous surrounding the primary break is cleared, drain subretinal fluid under fluid infusion (fluid-fluid exchange) and flatten the retina to prevent extension of detachment. Fluid aspiration often flattens the retina and reduces the risk of extension of retinal detachment.

Postoperative macular folds should be avoided by complete drainage of the subretinal fluid and avoidance of submacular fluid/macular fold during the fluid-air exchange.[10]