Loiasis is a disease of the subcutaneous and submucosal tissue caused by infection of the helminth Loa loa, also known as the African Eye Worm.[2] Loa loa is endemic to Central and West Africa, where it is transmitted by flies of the genus Chrysops.[3] Definitive diagnosis is made by direct visualization of the adult worm in subcutaneous or submucosal tissue, or by visualization of microfilariae by blood smear. Laboratory abnormalities are non-specific and include eosinophilia and elevated IgE.[4]Though most infections are asymptomatic, in some patients adults worms can be directly observed migrating through the subconjunctiva, where they can cause inflammation and edema. Rarely adult worms can invade the globe itself. Removal of worms from the subconjunctival space is useful diagnostically, but definitive treatment is based on anti-parasitic medication.

Loiasis is an infection of the submucosal and subcutaneous tissue caused by the filarial nematode Loa loa. Eyeworm is a pathognomonic finding in the disease course and occurs when the adult worm is visualized migrating beneath the bulbar conjunctiva.[2][3][5][6][7]Cutaneous manifestations including Calabar swellings are also pathognomonic and are likely due to a hypersensitivity response elicited by migration of the adult worm through tissue.[2] Loiasis has traditionally been regarded as a benign condition. It is not considered a Neglected Tropical Disease by the World Health Organization, and its primary cause for concern has been due to the risk for encephalopathy and other severe adverse reactions when ivermectin is administered to individuals who are coinfected with Loa loa and Onchocerca volvulus. However, the view of loiasis as a benign disease has been called into question by the finding that the population-attributable fraction of mortality associated with Loa loa microfilaremia is 14.5%.[8] It is hypothesized that this increased risk of mortality is due to obstructive or inflammatory processes within the circulation. This theory also explains the mechanism of retinal vessel involvement in Loa loa retinopathy, and might readily be applied to other organ systems.

GeoSentinel Surveillance Network data indicate that travelers to endemic regions are more likely to contract Loa loa infection if their duration of exposure is greater than one month.[10] 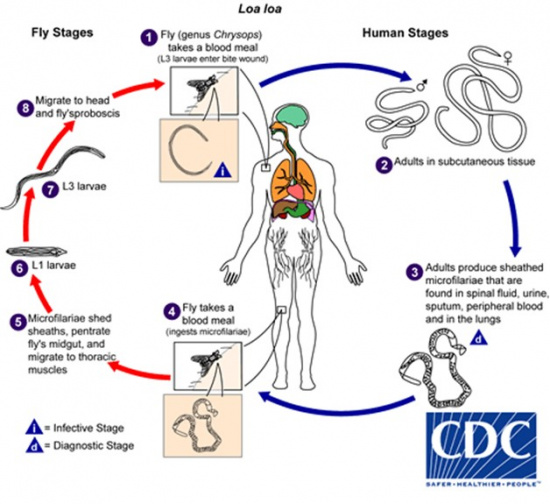 Loa loa is transmitted by the deerfly of the Chrysops genus, which demonstrates a diurnal pattern of activity, being most active from 10 am - 2 pm.[2] Microfilariae are sheathed and can be found in the spinal fluid, urine, sputum, lungs, and blood of an infected individual. Their diurnal activity coincides with that of the Chrysops fly, increasing their likelihood of ingestion during a blood meal. The microfilariae mature through the third larval stage (L3) within the fly, migrate to the proboscis, and enter a new host via a subsequent blood meal, where they mature into adult nematodes.[3][5]

Once within the human host, the maturation process from L3 larvae to adult nematode is estimated to require 150-170 days.[3] Disease manifestations, therefore, may not occur until 6-18 months from the time of inoculation.[6]

Because L. loa is long-lived (> 20 years) and adult females can produce 12,000-39,000 microfilariae per day, primary prevention is focused on reducing the near-constant exposure to the Chrysops spp. vector in endemic regions. [3]

Mass drug administration (MDA) programs have been successful for other filarial infections, but are of limited use in loiasis patients who present with increased risk of adverse drug reactions including encephalopathy upon administration of ivermectin.[11]

Definitive diagnosis of loiasis is made by detection of the worm in the subconjunctiva of the eye or visualization of microfilariae on blood smear in a patient from an endemic region or who has traveled to a high-risk area.[5] Surgical removal of the worm from the subconjunctival space allows for laboratory identification of the species. Calabar swellings may also help to confirm the diagnosis.

Loa loa is referred to as “African Eye Worm” because it can be observed migrating across the periorbital tissues and into the subconjunctiva. This observation is not associated with lasting damage to tissues. However, discomfort and foreign body sensation are commonly reported symptoms.[2][6][12][13][14]

In rare cases, L. loa has been noted to enter the anterior chamber, and live L. loa worms have been reported in the vitreous. Such patients present with a grossly visible intraocular filarial worm on physical exam, usually with pain and photophobia. Associated vision loss at presentation has ranged from 6/24 to light perception. Slit lamp exam often reveals fibrinous membrane formation, cell/flare, and keratic precipitates. More prolonged cases may develop retinal detachments.[15][16][17][18][19]

Pathognomonic signs of loiasis include Calabar swellings and visualization of the adult worm migrating through peripheral tissues, including the subconjunctival space.

Calabar swellings are caused by hypersensitivity reactions and present as non-erythematous, localized edema of the subcutaneous tissue.[5] These swellings are frequently found on the limbs, where they commonly inhibit movement of the nearest joint, but they can occur anywhere on the body.[2][5][6][7] Calabar swellings are thought to represent subcutaneous migration of the adult worm away from the point of initial inoculation.[2][4][7] These swellings spontaneously regress within several days of onset and recur at irregular intervals.[6]

By contrast, permanent residents of endemic regions more frequently manifest microfilaremia, episodic angioedema, eyeworm, and mild to moderate eosinophila, although cases of the hyperresponsive syndrome in permanent residents have been reported.[4][21][22][23] 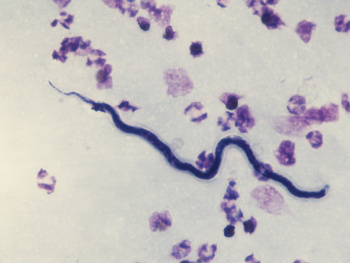 Loa loa-specific biomarkers have been identified that can be used to differentiate Loa loa infection from onchocerciasis and lymphatic filariasis.[24][25] ELISA antibody assays such as those which detect IgG4 have proven to have low specificity for loiasis, and low sensitivity for ongoing infection.[26] Recombinant antigen testing against LISXP-1 IgG4 utilizing the luciferase immunoprecipitation system (LIPS) has demonstrated 100% specificity against controls and 97% specificity against other filarial infection when conducted under its rapid format (QLIPS). Utilizing the LISXP-1 antigen, a lateral flow assay has been developed which can detect antibodies with 94% sensitivity and 100% specificity compared to control, along with 82% specificity compared with O. volvulus, 87% specificity compared with W. bancrofti, and 88% specificity compared to M. perstans.[26] Loop-mediated isothermal amplification (LAMP) has also been developed which has the advantage of being both highly sensitive and accurately distinguishing which individuals are at risk for adverse drug reactions after treatment with ivermectin.[27]

Onchocerciasis: Onchocerca volvulus infection also presents with generalized pruritis (more indicative of onchocerciasis), hypereosinophilia and antifilarial antibodies. Differentiation can be made by Loa loa specific laboratory tests such as qPCR or LAMP.[28] The disease course is also different, with O. volvulus invading deeper tissues. Onchocerciasis commonly causes visual abnormalities including blindness due to the presence of intraocular microfilariae,[13] which has earned it the epithet “African River Blindness.” Whereas loiasis primarily invades the subcutaneous and subconjunctival tissue, rarely penetrating the globe.[5] Coinfection with Loa loa is possible, as the regions of endemicity for these filarial nematodes overlap.

Lymphatic filariasis: Wuchereria bancrofti is the causative organism of lymphatic filariasis, a neglected tropical disease that is transmitted by the Aedes aegypti mosquito and which results in obstruction of lymph channels, leading to lymphedema and elephantiasis. Case reports exist of lymphatic filarial nematodes invading the anterior chamber,[29][30] but W. bancrofti can be differentiated from L. loa on physical exam. While loiasis can cause Calabar swellings, it is not known to cause lymphedema and does not chiefly inhabit the human lymph system.[31]

Thelaziasis: A zoonotic disease of the eye caused by nematode Thelazia spp. which is transmitted by flies of the family Drosophilidae. The adult nematode can be differentiated from Loa loa, as it predominantly resides in the conjunctival sac of its host rather than the subconjunctiva.[32] Ocular manifestations include pruritis, excessive watering, conjunctivitis, corneal edema, corneal ulceration, corneal scarring, and may progress to blindness.[32][33] In the majority of cases, the adult and larval worms can be removed by sterile saline irrigation, forceps or cotton swabs.[34][35] Intraocular thelaziasis and filariasis are both rare and have been successfully treated via vitrectomy.[36][37]

Pharmacotherapy is the preferred treatment of loiasis, as high systemic microfilarial loads mean that surgical intervention is not capable of eradicating the infection. When microfilarial loads are beneath a suggested threshold of 2500 mf/mL blood, diethylcarbamazine (DEC) remains the first line treatment for loiasis. It is prescribed as 8-10 mg/kg three times per day for three weeks.[2][38] DEC demonstrates efficacy against both adult worms and microfilariae and provides effective prophylaxis for individuals visiting endemic regions.[39] DEC is contraindicated in patients coinfected with onchocerciasis due to risk of Mazzotti reaction, which consists of fever, tachycardia, hypotension, arthralgia, and adenitis accompanied by anterior and posterior segment inflammation, when the eye is involved. It is caused by migration of the worms from the dermis into the vasculature and cerebrospinal fluid due to DEC therapy, where degradation results in a disseminated inflammatory response which can be fatal. Severity of reaction is correlated with pretreatment microfilarial load as demonstrated by skin snip.[40] Similarly, the major complication of medical treatment for loiasis is a serious adverse reaction resulting in encephalopathy and retinal hemorrhage due to the sudden killing of microfilariae when present in high numbers in the blood.[6]

Albendazole is used as sequence therapy for patients with microfilarial loads greater than 2500 mf/mL blood, as it targets adult worms but not microfilariae and thereby reduces blood counts slowly.[41][42] Because it more gradually decreases microfilarial loads, it is associated with fewer adverse effects compared to DEC. Albendazole may also be used as adjunct therapy in cases refractory to multiple treatments with DEC.

Ivermectin is highly effective against L. loa, and a single dose can reduce systemic microfilarial loads for over a year.[43] However, it has no activity against adult worms.[44] Pretreatment with albendazole may be appropriate in patients with a high microfilarial load, as pharmacotherapy with ivermectin has been demonstrated to cause serious neurological adverse events in these patients.[44][45] The first signs occur with 12-24 hours following treatment and include fatigue, generalized arthralgia, agitation, mutism, and incontinence. Later signs include coma and loss of consciousness and manifest 24-72 hours post-treatment. Ophthalmic findings include retinal and conjunctival hemorrhage. Risk for this syndrome is associated with significant microfilaremia.[46]

Patients should be followed closely for the first three days after initiation of treatment for concern of Mazzotti reaction in the case of DEC therapy, or neurological complications caused by ivermectin therapy. Albendazole has not been demonstrated to cause any adverse reactions when initiated for pretreatment. Patients ought to be evaluated throughout their three-week course. Failure to reduce microfilarial loads by the end of the three week treatment course warrants additional courses of therapy or switch to a different class of drug.

Surgical removal of adult worms from the conjunctiva of the eye is indicated whenever the adult worm presents in the subconjunctival space, and is followed up with systemic medications, which prevent recurrence by reducing systemic micro- and macrofilarial loads.

Procedure: Given that a worm in the subconjunctival space may quickly migrate out of sight, the worm should first be grasped externally with forceps to prevent migration. Subsequent subconjunctival injection of 2% lidocaine with epinephrine 1:100,000 can then be used to simultaneously numb the region and paralyze the worm. A peritomy generally ≤ 5 mm allows access to the paralyzed worm, which can then be removed with a second set of forceps.[14]

Procedure: Intracameral filarial worms may be removed with an anterior chamber washout, followed by a subconjuctival injection of steroids and antibiotics.[17] In patients with more prolonged disease and more intense intraocular inflammation, excision of intracameral fibrinous membranes may be indicated.[16]

One case report of L. loa in the vitreous was effectively treated with vitrectomy with steroid cover.[37]

Visual acuity is generally not affected by the presence of adult worms in the subconjunctiva, and lasting tissue damage is not generally seen.[12][14][30]

Intraocular filariasis, however, can be much more devastating, with some patients ending up NLP. The patient’s pre-operative presentation is strongly correlated with the postoperative outcome.[15][16][17][18][19] In general, patients with more advanced disease at presentation (with more pronounced intraocular inflammation) are more likely to suffer significant long-term vision loss, while patients whose intraocular filariae are removed prior to development of intraocular membranes may be able to return to their normal visual acuity.[17]