Laser Vitreolysis is a medical procedure involves the application of nanosecond pulses of low-energy laser light to evaporate and dissection the vitreous opacities.

Vitreous opacities, also known as floaters, are among the most common ocular conditions. In some patients, floaters symptoms can adversely affect quality of life, interfere with reading or driving and may persist for a long time.[1][2]

A study by Wagle and coworkers addressed the impairment on vision quality associated with floaters in 311 outpatients. This study demonstrates that floaters have as much influence on quality of life as other ocular and systemic diseases. The utility values of floaters were equal to age-related macular degeneration, and similar to glaucoma, mild angina, stroke and asymptomatic HIV.[1] A study by Webb and coworkers demonstrated that floaters are common in the general population, irrespective of age, race, gender and eye color. In a review of 603 smartphone users, 76% (n=458) indicated that they notice floaters, with 199 of these individuals citing noticeable vision impairment as a result of their floaters. Myopes and hyperopes were 3.5 and 4.4 times, respectively, more likely to report moderate or severe floaters. [3] A study by Garcia and coworkers showed that there was a 52.5% reduction in contrast sensitivity function following posterior vitreous detachment.[4]

Three management options exist for symptomatic floaters: patient education and observation, pars plana vitrectomy and YAG vitreolysis.The most common advice to patients by ophthalmologists are “try to ignore them” and “learn to live with them”. 23G vitrectomy can be successful but is an invasive procedure and most retinal specialists are reluctant to accept this procedure for floaters due to potential risks including retinal tears and detachments, proliferative vitreoretinopathy, choroidal bleeding, macular shrinkage, and cataract progression.[5] [6][7][8]

YAG laser treatments for posterior ocular segment have been performed with variable success since the 1980s. These conditions included vitreoretinal tractions due to proliferative diabetic retinopathy, sickle cell retinopathy, vitreous cyst and rhegmatogenous retinal detachment.[5] The first report of YAG laser vitreolysis for floaters was published in 1993. In that study, Tsai and collaborators used YAG laser to treat 15 patients with localized prepapillary or central vitreal opacities. All patients were satisfied with the treatment and stated that their floaters disappeared immediately after the operation. During the 12 month follow up period, no patient showed any significant visual deterioration or recurrence of subjective floaters .[9] Other older data sets suggested only modest efficacy and possible safety concerns that led many doctors to be skeptical about the procedure.[10] It is important to note these older studies were using laser technology not optimized for laser floater treatment. The latest developments and achievements in lasers, optics and lightning systems which using the same optical pathway, allowing for simultaneous visualization of both the retina and the floater for more accurate treatment.

The mechanism of action is called “plasma formation” and “optical breakdown” which are terms used in describing laser physics. Optical breakdown requires a very high frequency electrical field in the optical region of the electromagnetic spectrum that is confined to a very small area. The temperature at the center of the area of optical breakdown has been calculated to be several thousand degrees. The laser performs photoconversion of the solid floater into a gas with a combination of photochemical, thermal, thermoacoustical and electromagnetic optical field effects. It is important that the laser is firing in the range that obtains optical breakdown to change the form of matter from a solid to a liquid and to some extent to a gas. The gas bubbles that form float away and gradually dissolve. The dissolved gases can then pass across cell membranes and be carried away by the blood vessels. The smaller the focal area and the shorter the pulse width, the less energy is needed to create the plasma and associated shockwave. Due to the short duration of the pulse (4 ns), heat is dissipated before the next shot is fired. If the laser is fired into the vitreous below the optical breakdown level (normally about 2.2 mJ) the floaters will only be fragmented and the success rate will be quite low.[11]

Most specialists are guided by the following criteria for selecting patients for laser vitreolysis:

The following contraindications for the procedure have been identified:[5][11][15] 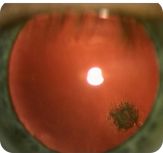 The disruptive laser energy can subsequently lead to a defect of the posterior capsule, which could result in a cataract formation.

Absence of cataract formation, as a potential complication of laser vitreolysis, could be achieved by the safe distance to the crystalline lens and the low energy applied during laser treatment. It is important to mention that it cannot always be guaranteed to observe this safety distance, for example due to unexpected patient movements, movement of floater during treatment or difficulties with focusing the laser beam onto the vitreous opacities. Even if the safety distance was observed, a high laser energy can unintentionally affect the lens or retina.

Laser injury–related transient posterior pole retinal hemorrhages were reported.[11] [26][31][32]In one of these cases, the patient remained asymptomatic, while in the other, a transient scotoma was seen that lasted a few weeks and corresponded to the area of subretinal hemorrhage with nearby retinal whitening. 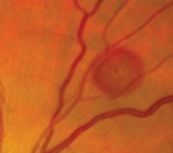 There is a report of retinal detachment when patients underwent laser vitreolysis immediately after Nd:YAG capsulotomy. Retinal detachments are associated with posterior capsulotomies probably because with that procedure, vitreous can herniate through the created capsulotomy into the anterior chamber and thereby increase vitreous traction on the retina. [33]It is suggested that Nd:YAG capsulotomy maybe performed first and then Nd:YAG vitreolysis may be performed after a safe interval and a thorough retinal examination.

There is some recommendations to prevent this complication: don’t operate on anyone with elevated pressure, glaucoma; don’t use an excessive number of shots (more than 300 total per eye); try to use less shots on any floater that is close to the trabeculum; never widen a posterior capsulotomy at the same sitting as the floater treatment.[11]

The U. S. Food and Drug Administration when approving YAG lasers for this procedure, classified this as a non-significant risk procedure. The spectrum of complications submitted to the ASRS ReST Committee is consistent with previous reports and indicates that complications remain relevant to laser vitreolysis as currently performed.

Cases of retinal detachment and raise IOP cannot determine whether there is a causal association between these complications and laser vitreolysis. Prospective studies are warranted to better understand the efficacy of this procedure and the frequency of attendant complications. Until then, practitioners should be aware of the profile of potential complications to properly inform patients during the consent process.

The position of focus and optimal energy applied during laser treatment is an important factor, which if miscalculated could result in complications. Using the patient’s subjective claim of the resolution of floaters as an outcome measure, the success rates claimed by existing publications are highly variable.[10][11][16][35][36][37]

Shah and colleagues were the first to conduct a randomized placebo-controlled trial evaluating the safety and efficacy of laser floater treatment using advanced YAG technology specifically designed for laser-based floater treatment. The study concluded that 54% of patients in the YAG laser group experienced symptomatic improvements compared to 9% of patients in the control group. The YAG laser group also showed greater improvement in the 10-point visual disturbance score than the control group.[16]

The currently available evidence offers some indications that YAG laser vitreolysis may be a viable option for the symptomatic relief of selected patients with bothersome complaints due to vitreous opacities. The advantages of Nd:YAG laser is that the eye remains closed and that vitreous components are vaporised. Clearly, the importance of careful case selection, good history taking, detailed counseling, written informed consent, well documented by imaging and careful postoperative follow-up cannot be overemphasized. [38]

Centrally suspended, single floaters might be best candidates for vitreolysis or displacement, but this remains to be demonstrated. In particular, cases with chronic Weiss rings or solitary opacities may be the best candidates that will likely benefit the most from this procedure. On the other hand, notwithstanding how annoying the symptoms can be, the safety profile of this treatment seems far from optimal considering that the presence of vitreous floaters is not a vision-threatening condition.

Obviously, appropriate trials will need to be conducted to determine indications and characterize the long-term safety and efficacy of the procedure.