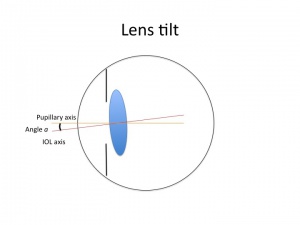 In modern cataract surgery with implantation of intraocular lenses (IOLs), IOL tilt has the potential to induce astigmatism and higher-order aberrations. Lens tilt is defined as the angle between the IOL optical axis and the baseline axis. Decentration is defined as the vertical distance from the IOL center to baseline [1]. The simple aberration theory suggests that a beam of light entering a spherical lens obliquely will produce marginal oblique astigmatism. IOL tilt is usually at a magnitude of about 5-6 degrees and usually greatest around a vertical axis with the nasal edge displaced anteriorly and temporal edge displaced posteriorly [1]. IOL tilt is becoming increasingly important with the rising popularity of scleral-fixated IOLs such as those implanted using the Yamane technique or other methods of scleral fixation (https://eyewiki.aao.org/Scleral_fixated_intraocular_lens)

A thin lens of power P in air, in the pupillary plane, and tilted by angle a has astigmatism A with an angle perpendicular to the tilt axis. This is summarized in the following equation [1]:

Computer models that use ray tracing compared estimated/simulated astigmatism to the actual measurements of aberrations on the same eyes and found a consistent overmeasurement of simulated astigmatism. The cornea may be the main source of astigmatism in pseudophakic eyes with clinically normally placed IOLs, which suggests that perhaps IOL tilt plays a negligible role [1]. This likely differs significantly in scenarios where lens centration is suspect or atypical.

Lens tilt or decentration occurs in about 5-10% of patients after scleral-sutured posterior chamber lens implantation [2][3] and can occur even after uncomplicated implantation.

Large amounts of IOL tilt or decentration may cause enough astigmatism to significantly affect quality of vision. Guyton et al. found that 1 mm of decentration and greater than 5 degrees of tilt optically alter visual acuity [4]. Multifocal, toric and toric multi-focal are more sensitive to small changes in tilt compared to monofocal IOLs and centration parameters need to be particularly accurate and precise. 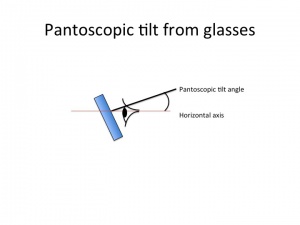 Tilting a lens along the horizontal axis (180 axis) is called pantoscopic tilt. Tilting along the vertical axis is called face form tilt.

Tilting a lens with the top forward and the bottom backward will increase plus sphere power for a plus lens or will increase minus power for a minus lens. Thus, the prescription of the glasses will change when tilted.

For a plus lens, tilting at 180 axis will increase the positive sphere power and will add positive cylinder power in the 180 axis.

For a minus lens, tilting at 180 axis will add negative sphere power (the sphere will become more minus), increase minus cylinder at 180 axis but will increase plus cylinder in the 90 axis. Therefore, tilting glasses at 180 axis can ameliorate under-corrected myopia or under corrected with-the-rule astigmatism. 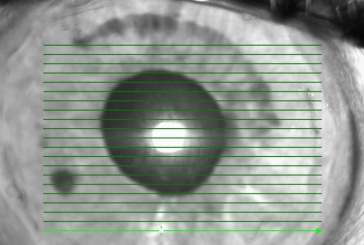 IOL tilt can be measured with ultrasound, the Purkinje reflection device, the Scheimpflug camera, anterior segment OCT, or subjective grading at the slit lamp with findings including transillumination defects.

Purkinje imaging uses light reflections from the ocular surface of the eye to evaluate alignment. Light is reflected at each media interface with a difference in refractive index [5]. The images are reflections from the anterior corneal surface (PI), posterior corneal surface (PII), anterior lens surface (PIII), and posterior lens surface (PIV). This method assumes that the locations of images of a light source are linearly related to eye rotation (B), IOL tilt (a) and IOL decentration (d), and relies on proper measurements of lens radius of curvature [1].

A-G are coefficients customized to the anatomic parameters of the eye [1].

Scheimpflug imaging provides anterior segment images with a large depth of focus.  This scanning method is quick, requiring patients to fixate for 1.5 seconds without moving. The images are processed to obtain the pupillary axis, IOL axis, and IOL tilt. However, good pupil dilation (more than 6 mm) is required, which can affect the pupil axis and tilt characterizations. Identifying the structures needed to serve as a reference point can be difficult. Scheimpflug imaging is also subject to optical distortion (due to viewing anterior refracting surfaces) and geometric distortion (due to tilt of planes) [6]. This method is not used as much due to corneal magnification leading to inaccurate results [7].

Anterior segment OCT is a fast, noninvasive, non-contact and high-resolution method of measuring IOL tilt. The eye is scanned at the rotated axis which passes through the anterior corneal center and the pupillary center [1]. Advantages are the ability to be performed in the immediate postoperative period and in eyes with corneal opacification, such as from corneal edema, and it also does not need coupling fluid. The disadvantage is inability to visualize the haptic below the iris [8] [9].

Ultrasound biomicroscopy allows visualization of the tilt and decentration but may make quantification of IOL tilt challenging. This is a contact method and may deform the eye though this may be avoidable with certain precautions [1]. This typically requires elevated level of technical skill for both surgeons and ancillary staff.

Prevention of induction of IOL tilt is possible intra-operatively. Use of capsular tension rings in case of poor zonular support can help prevent IOL tilt. For scleral fixated lenses, four point fixation is generally considered better to prevent tilt. In two point fixation, it is important to ensure that the sclerotomies are exactly 180 degree apart.

Indications for exchange, repositioning, or removal of the IOL include Uveitis-Glaucoma-Hyphema (UGH) syndrome, high astigmatism, and substantial increase in both lower and higher order optical aberrations.

The increasing use of intraoperative OCT for in vivo anatomic assessment and other imaging devices such as intraoperative aberrometry to detect refractive effects of pantoscopic tilt may allow surgeons to identify tilt in the operating room and adjust accordingly at the time of the initial surgery. This may assist in decreasing the incidence of tilt after cataract surgery, improving visual outcomes and potentially avoiding second surgeries.