Glaucoma describes a group of conditions in which there is characteristic cupping of the optic disc with corresponding visual field defects, due to retinal ganglion cell loss. It is the leading cause of irreversible blindness worldwide. Non-modifiable risk factors for glaucoma include age, ethnicity, corneal thickness, and genetic history.[1] The most recognized modifiable risk factor is intraocular pressure (IOP) and as such, most available glaucoma therapies focus on the reduction of IOP to reduce progression of glaucomatous damage and visual field loss.[2]However, further understanding of etiologies and mechanisms causing glaucomatous damage need to be explored as not all people with ocular hypertension develop glaucoma and glaucoma can develop in cases of normal IOP (<22 mm Hg), classified under normal tension glaucoma (NTG).[3]

The lamina cribrosa (LC) is a mesh-like structure in the posterior portion of the sclera that allows optic nerve fibers to leave the eye. Anterior to the LC is the interior of the eye and posterior to the LC is the optic nerve surrounded by the meninges, all within the optic sheath. The cerebrospinal fluid within the subarachnoid space surrounding the optic nerve is continuous with the subarachnoid space surrounding the brain and spinal cord.[4][5] Acting on the LC are the opposing IOP and intracranial pressure (ICP). Recently, many studies have demonstrated that ICP can have an important role in structural damage to the optic nerve. Several studies reported significantly lower ICP in subjects with glaucoma compared with healthy subjects. [6][7]Furthermore, significantly higher ICP was recorded in subjects with ocular hypertension (no functional glaucomatous damage despite elevated IOP) compared with healthy eyes. [6][8] In an animal model, extended reduction in ICP resulted in ocular neural tissue loss in half of the monkeys. [9] Zhang et al demonstrated similar changes in axonal transport and morphology and immuno-histochemical staining in rats who had elevated IOP and decreased ICP. [6] These findings suggest that both IOP and ICP may play an important role in the disease process.

The translaminar pressure gradient (TLPG) created at the LC level between ICP and IOP could be the major determinant for the damage to the optic nerve at the LC level.[10] The TLPG is estimated to be 20 to 33 mm Hg/mm on average in humans. [7][8] Jonas et al stated that the main factors that contribute to the gradient are LC thickness, IOP and the pressure of retrolaminar tissue.[10][11] The TLPG may be defined as the difference between IOP and ICP per unit thickness of the LC (TLPG = (IOP/ICP) /thickness of LC).[12] The LC is considered to be the primary site of axonal damage in glaucoma, associated with the distortion of axoplasmic flow in the axons of ganglion cells. A posterior movement of LC and an increase of depth are described for the patients with glaucoma. It has been shown that the increased depth of the anterior surface of the LC (ASLC) precedes the structural damage and the loss of nerve fiber layer. In the future, ASLC depth and the translaminar gradient may be considered as additional and earlier information for the diagnosis of glaucoma.[13][14][15][16] The Swept Source (SS) OCT and Enhanced Depth Imaging (EDI) has permitted these evaluations.[17] 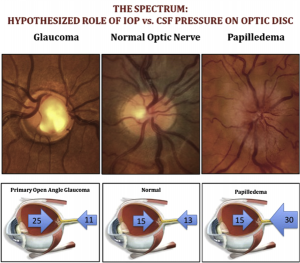 Fleishman and Berdahl have postulated the CSF theory of glaucoma that defines that the balance between the two pressures (ICP and IOP) determines the TLPG. If the ICP is reduced or the IOP is increased, the TLPG will increase and the damage to the LC will appear, with an increase in ASLC depth and cupping of optic disk. The reverse effect of the CSF theory can be seen in clinical conditions like idiopathic intracranial hypertension (IIH) and ocular hypotony. All of these conditions cause an unbalanced anteriorly directed force either due to an elevated ICP and normal IOP (IIH) or a normal ICP and low IOP (ocular hypotony). The net result is a negative cupping effect or swelling optic disk. Patients with IIH may tend to have ocular hypertension to counterbalance the increased ICP, maintaining a homeostatic gradient. It has been proposed that a clinically increased IOP may be a treatment option for patients with IIH.[18] (Fig.1) Health of the optic nerve head is maintained by a homeostatic pressure difference between the posteriorly directed IOP and an anteriorly directed ICP.

Chen et al. reported a patient with NTG after the implantation of a ventriculo-peritoneal shunt, showing that the reduction of ICP led to the increase of TLPG and glaucoma.[22] Low CSF pressure may be associated with NTG. Some years ago, Volkov, Szymansky and Wladyczko reported that the reduction of ICP was associated with glaucomatous optic neuropathy. Recently, Siaudvytyte et al, Ren et al and Berdahl et al detected correlations between TLPG and the presence of structural and functional manifestations of glaucoma.[23][24][25][26][27][28] Yablonski et al. experimentally demonstrated that glaucoma-like cupping and axonal swelling in cat eyes by could be induced by decreasing ICP and additionally counteracted the changes by concurrently decreasing IOP. In a retrospective study, Berdahl et al analyzed a group of patients submitted to lumbar punctures without ophthalmological causes, demonstrating that patients with primary open angle glaucoma and NTG have a reduction of ICP increasing the translaminar gradient. Ren et al confirmed this study in a prospective investigation. They also found a strong correlation between these two pressures and between blood pressure and CSF pressure. Siaudvytyte et al detected an increased gradient and a reduced neuroretinal rim in patients with normal pressure glaucoma.[29][30][31][32][33] Morgan et al. concluded that CSF pressure was the major determinant of the post-laminar pressure and that the effect of altering the CSF pressure was biomechanically equivalent to altering the IOP. These factors can influence the development of NTG or the susceptibility of the optic nerve to ocular hypertension.[34] Fleishman et al stated that there is a significant reduction of the CSF pressure with age that occurs after the age of 50 years and interestingly, the prevalence of primary open angle glaucoma typically starts to rise around the same age.[35] 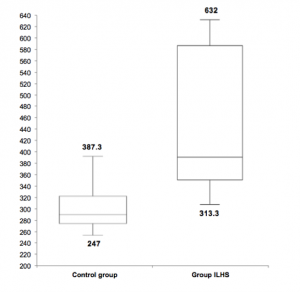 Fig.2 Histogram with the distribution of the final depth values of group of ILHS and control group. 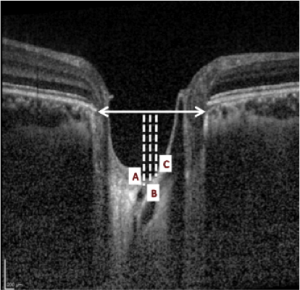 Soares er al analyzed the LC depth and the optic nerve in patients with Intracranial Liquor Hypotension Syndrome (ILHS).[36] They found that the ASLC depth was significantly higher in the group of patients with ILHS comparing to control group. (Fig.2) The depth of ASLC was defined as the distance between the plan of Bruch’s membrane opening (BMO) and ASLC (Fig.3).

This study demonstrates that the TLPG is determinant in the structure of the LC. Low intracranial pressure associated with a high translaminar gradient leads to an increased LC depth similar to that observed in glaucoma patients. This was the first study about the evaluation of LC and optic nerve of patients with ILHS that emphasized the importance of ICP and TLPG in the structure of LC and optic nerve.

The evaluation of TLPG and ICP will be a future tool used to complement the study of the optic nerve and to evaluate patients with glaucoma. However, there are many factors that have not been well explained: 1) it is not clear if ICP evaluated by lumbar puncture considers the presence of orbital septum that can limit the flux of fluid in the orbit; 2) the fluid dynamics have not been well defined and the role of postural changes and patient activity in the evaluation of ICP is not clear; 3) the better method to evaluate ICP (invasive or noninvasive) has not been defined.[31]Currently, ICP is often measured via lumbar puncture (LP). Although LP is invasive, it has been shown to accurately represent ICP.[37] Efforts to measure ICP noninvasively have been explored, and may be considered when LP is contraindicated, but have not proven to be as reliable and accurate as LP.[38][39] When combined with the variability of measurements in regards to postural and diurnal changes, the fluctuation in measurements may challenge the reliability of studies assessing for differences in ICP and TLPG, as the pressures between glaucomatous and nonglaucomatous patients can be quite close at a few mm Hg apart.

Considering all retrospective, prospective and experimental data, we have to think about the importance of ICP in the diagnosis and treatment of glaucoma. Also, the ophthalmologist can now look for signs of glaucoma in patients with subtle neurological symptoms of low ICP like postural headaches. The physiologic balance between these two pressures is important to the health of retinal ganglion cells and their axons. Dysregulation of this process may have an important role in the pathogenesis of glaucoma.

In conclusion, it is essential to consider the TLPG and ICP in the evaluation of patients with glaucoma.