Image-guided surgical navigation (ISN) is a useful tool in orbital surgery which allows for 3-dimensial (3D) localization of the surgeon’s instruments within a confined space which holds important vascular and neural structures. It has long been used in surgical specialties beyond oculofacial plastic surgery. First employed by neurosurgeons to aid in tumor localization, the use of ISN has since expanded to otolaryngology, dental, spinal and now more recently orbital surgery.[1] Intraoperative navigation relies on the principle of stereotaxy, whereby external markers are used as a reference point, allowing for three planes of visualization to localize internal surgical/anatomical landmarks. Stereotactic surgery enables the surgeon to precisely direct surgical instruments or radiation towards a specific area thereby improving surgical precision, instrumentation and reducing intra-operative complication rates.[2]

Image-guided surgical navigation has been used in orbital surgery to aid in pre-operative planning, allowing the surgeon to determine the most minimally invasive route that would yield the least collateral damage to surrounding tissue. Navigation assistance also enables the surgeon to account for any possible anatomical variations or incidental findings that may complicate the surgery.

At present, there are two main modalities for intraoperative navigation, optical (infrared) and electromagnetic-guided navigation.

Orbital decompression is a procedure that aims to relieve proptosis and compression on the optic nerve by removing a portion of bone or the orbital wall and thereby expand the orbital volume. ISN has proven advantageous in complex cases that require 3-wall decompression, cases of subtotal decompression that require reoperation, and cases with anomalous variations in orbital anatomy. Depending on the surgical approach, CSF rhinorrhea, infraorbital nerve injury, and post-operative diplopia are potential complications.[3][4][5] Numerous approaches have been proposed to find a balance between the competing factors of pre-operative proptosis, post-operative diplopia and cosmetic outcomes. In a case series of seven patients with thyroid eye disease (TED)-related proptosis there was a mean reduction in proptosis of 9.36 mm with no intra-post-operative complications 6 months after stereotactic-guided balanced (medial and lateral wall) orbital decompression.[6]

Optic canal decompression (OCD) is performed in cases of traumatic optic neuropathy; however, localization can be a challenge with the transcaruncular approach. Inadvertent injury to surrounding structures and the optic nerve are possible complications. INS provides improved precision, safety and positional orientation. Various reports have highlighted the role of ISN in presurgical planning of cases with traumatic optic neuropathy associated with optic canal fractures due to the difficult visualization of the disturbed anatomy. INS has allowed for improved post-operative visual outcomes in patients with optic canal fractures with owing to improved precision when navigating within the orbit thereby limiting iatrogenic injury to the optic nerve.[7][8] 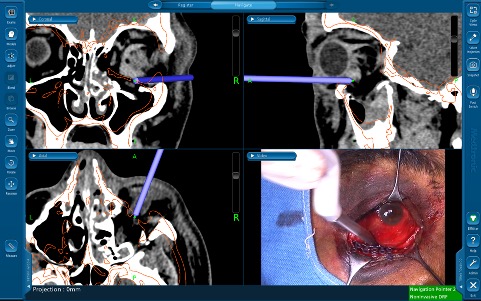 Figure 1: Intraoperative use of image-guided navigation during orbital reconstruction of left orbital floor fracture. Unaffected contralateral orbit used as a mirror to aid in appropriate placement of titanium implant. The blue pointer represents the navigation probe and the orange outline is the overlayed mirror image of the contralateral orbit on the left fractured orbit.

Orbital reconstruction aims to replicate the dimensions of the orbit prior to the traumatic event. The unaffected contralateral orbit is commonly used as a template when planning the procedure. Surgical navigation has risen as viable method for the measurement of orbital volume and dimensions. Markiewicz et al. found high reliability between the pre-operative unaffected and postoperative affected orbital volumes in 23 subjects who underwent orbital reconstruction with ISN.[9] Orbital reconstruction of post-traumatic and tumor ablation deformities poses the challenge of post-operative orbital asymmetry resulting in functional and cosmetic disturbances including enophthalmos. First described by Gellrich[10], the use of ISN has enhanced pre-operative planning for orbital reconstruction. Allowing for prediction of surgical steps to ensure avoidance of vulnerable structures (i.e. optic nerve), pre-planning of bone graft position and orbital frame contouring. Complex reconstructions that require sheet implantation can be challenging due to the poor visualization of key anatomical landmarks within the orbit resulting in residual enophthalmos and limitations in motility. ISN allows for real-time intraoperative measuring of the implant and symmetrization resulting in more predictable outcomes.[11]

Intraoperative navigation has proven helpful the surgical resection of orbital tumors by providing accurate localization and identifying tumor margins. In a retrospective study of 23 patients with orbital tumors, 19 of which were meningiomas, ISN altered the surgical approach in 52% of patients due to the intra-operative finding of residual tumors after initial resection.[12] The use of ISN can be limited by the inaccuracy of pre-operative scans after resection and extensive manipulation of structures results in a shift or distortion of the pre-operative anatomy.

Few reports in the literature exist of the use of ISN for the removal of orbital foreign bodies.[13][14][15] The utility of INS in orbital foreign body exploration and removal is if the surgeon is able to determine the optimal site for surgical incision to minimize depth of incision and any accompanying collateral damage to surrounding tissue. In a retrospective study of 30 patients who underwent image-guided removal of orbital metallic foreign bodies, there was no significant difference between the preoperative and intraoperative depth of foreign body (20.02 vs 19.98 mm).[16]

ISN is a useful adjunct in various types of orbital surgery. At present, it is not the current standard of care but with the growing popularity of this technology and the advancement of surgical techniques, ISN will continue to prove an advantageous tool for orbital surgeons.