The term Hydro dissection was coined by Faust in 1984.He described it as injection of fluid to separate the lens nucleus from cortex during a planned extra capsular cataract extraction, to facilitate mobilisation and easy removal of nucleus1. This procedure requires cortical removal by irrigation aspiration as a separate step. 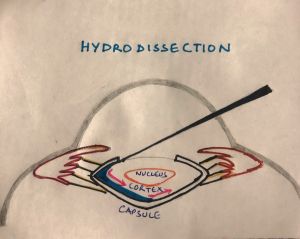 Injection of fluid between the capsule and the cortex in order to free the adhesions of the cataract from the capsular bag and allow it to rotate fully.

Although subcapsular injection of fluid in human cadaver eyes in a laboratory setting had been described earlier (D.J. Apple and co authors), a description of the procedure in a clinical setting was given by Fine in 1992 and he called it Cortical Cleaving Hydro dissection. This technique which is widely used, effectively cleaves the surrounding cortex from capsule by pre injection tenting of the anterior capsule and if successfully performed, does not require cortex removal as a separate step, eliminating the associated risk of a posterior capsule rupture(PCR)3,4.It ensures ease, safety and efficacy of nucleus emulsification, thereby reducing the time taken for phacoemulsification5. Another advantage is the removal of equatorial lens epithelial cells(LECs) from the adjacent capsule by the shearing effect of fluid during the procedure, thereby reducing the incidence of posterior capsule opacification(PCO)6.

Syringe with hydrodissection cannula is used. A small-diameter cannula (30- or 27-gauge) is preferred as it provides an increased flow resistance and maximizes the force that can be generated by a small volume of fluid.

A 3-cc syringe is recommended as it provides a fluid jet that is brief, sufficiently forceful and oriented in a radial direction. A tuberculin syringe contains insufficient volume and larger-volume syringes are bulky and do not provide enough tactile feedback as the plunger is advanced. Balanced salt solution (BSS), lidocaine, or ophthalmic viscosurgical device(0.5 -1 cc) can be injected.

Capsulorhexis size of 5-5.5mm with a large anterior capsular flap is optimum.A blunt hydrodissection cannula is passed inferiorly and is used to tent the anterior capsule away from the cortex and is advanced near the equator. Maintaining the tented up position, fluid is injected gently.This results in a posterior fluid wave between the capsule and the cortex, followed by bulging forward of the entire lens due to the fluid trapped by the firm equatorial cortical-capsular connections. This is the result of a temporary intraoperative capsular block syndrome and is characterised by an enlargement of capsulorhexis diameter. The central portion of the lens is then depressed with the side of the cannula, forcing fluid to come around the lens equator from behind by cleaving the cortical-capsular connections in the capsular fornix and under the anterior capsular flap, and exiting via capsulorhexis. This constricts the capsulorhexis to its original size, and mobilizes the lens.

Hydro dissection and capsular decompression may be repeated in the opposite distal quadrant and may be followed by hydrodelineation. Adequate hydro dissection at this point can be demonstrated by the ease with which the nuclear–cortical complex can be rotated by the cannula.

Separation of cannula from syringe during fluid ejection: This can be avoided by using Luer-lock syringe.

Inadequate fluid injection, injection into the lens or failure to create enough hydraulic pressure to separate the capsule and cortex can result in stressful rotation of nucleus. A repeat hydrodissection should be performed in such instances to avoid zonular stress.

Errant Placement of the Cannula

Inadvertent placement of the irrigating cannula beneath the iris, but on top of the anterior capsule may happen rarely in small pupils and can result in injection of fluid within the zonules, over the vitreous face, and into the posterior capsule. This can result in a shallowing of anterior chamber as occurs with fluid misdirection syndrome.

Prolapse of the nucleus partially or wholly in anterior chamber

Rare cases of anterior capsule tear through the posterior capsule, anterior hyaloid membrane tear and acute aqueous misdirection have been reported due to rapid elevation of intra ocular pressure during manual hydrodissection.

Injection of small quantities of fluid focally in multiple quadrants. This is particularly useful in cases of corticocapsular adhesions which are unlikely to get cleaved by single quadrant conventional hydro dissection10.

Fine et described this technique where tiny quantities of fluid are injected gently in multiple quadrants, such that fluid wave is not allowed to spread across the entire posterior capsule thereby sparing the area of dehiscence11.

This technique uses the phaco tip to intentionally vacuum the intraocular fluid in order to induce the irrigation dynamic pressure for cortical-capsular cleavage, there is a reduction in the intraocular pressure (IOP) from the bottle-height-dependent hydrostatic pressure thereby avoiding complications13.

The procedure was first described by Anis (A. Anis, M. D., "Understanding Hydro delineation: The Term and Related Procedures," Ocular Surgery News, October 15, 1991, 134-137) as an injection of fluid into the body of the lens deep to the cortex resulting in separation of epinuclear shell or multiple shells from a more compact central nuclear mass. It is a useful technique in situations with compromised capsules. 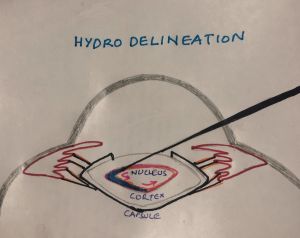 The reduced overall size of the nucleus allows less deep and less peripheral grooving and smaller, more easily mobilized quadrants after cracking or chopping. The epinucleus acts as a protective cushion within which phacoemulsification forces can be confined. In addition, the epinucleus keeps the bag on stretch, making it unlikely for a knuckle of posterior capsule to occlude the phaco tip and rupture.

Instrumentation is same as that for hydrodissection. The cannula is placed in the nucleus, off centre to either side, and directed at an angle downward and forward towards the central plane of the nucleus. Endonucleus is reached when the nucleus starts to move.The cannula is then directed tangentially to the endonucleus, and a to-and-fro movement of the cannula is used to create a tract within the nucleus. The cannula is backed out of the tract approximately halfway and a gentle but steady pressure on the syringe allows fluid to enter the “empty” distal tract without resistance. Driven by the hydraulic force of the syringe, the fluid will find the path of least resistance, which is the junction between the endonucleus and the epinucleus, and flow circumferentially in this contour Most often, a circumferential golden ring will be seen outlining the cleavage between the epinucleus and the endonucleus.

Difficulty in finding the right plane in very soft and very hard cataracts. This may occasionally result in inadvertent hydrodissection.

First described by Vasavada, in this technique fluid is injected from the inside of the nucleus to the outside, allowing precise hydrodeliniation14. The desired thickness of the nucleus–epinucleus bowl can be accomplished because the right-angled cannula can direct the fluid in the desired plane. This technique is useful in eyes with posterior polar cataracts and in eyes with dense cataracts in which aggressive phaco parameters are necessary for their removal.