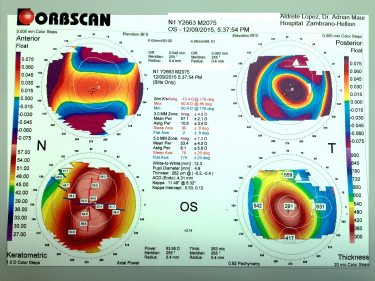 LASIK and PRK induced ectasia is preventable if the preoperative corneal topography/tomography and pachymetry indexes for high-risk are identified on time.[1][2][3]

Refractive surgery induced ectasia is probably the most feared complication of laser in situ keratomileusis (LASIK) and photorefractive keratectomy (PRK). It presents as a progressive eccentric thinning of the corneal stroma with consequent steepening of the anterior and posterior surface of the cornea. The disorder is considered irreversible and may reduce significantly uncorrected and spectacle-corrected visual acuity.[3] Although the general prevalence of postoperative ectasia is unknown, there are several reports that show a prevalence rate that vary from 0.02% to 0.6% .[4][5] Risk factors for the development of post-LASIK/PRK ectasia include a personal or family history of keratoconus (KC), abnormal corneal topography/tomography (form fruste keratoconus), high myopia, low-residual stroll bed (RSB <300 microns), excessive stroll ablation (>100 microns), high percentage of tissue altered (PTA >0.40); deep primary keratotomy resulting in a thick corneal flap and low preoperative corneal thickness (<500 microns).[3] [6][7][8]

Even when risk factors for ectasia after refractive surgery have been identified, reports of individuals developing ectasia without any of the proposed risk factors have emerged, this specific group of patients have shown a tendency to be younger.[3][9][10][11] Eye rubbing could explain the ectasia occurence in some cases without other identified risk fators.

Corneal ectasia induced by excimer laser refractive surgery is thought to be the result of the alteration of the corneal surface and anterior stroma in corneas with previous biomechanical abnormalities.[12] Histologic and ultrastructural findings explain the pathophysiology of post-LASIK or post-PRK ectasia by interlamellar and inter fibrillar biomechanics slippage induced by excimer laser disruption (interlamelar and inter fibrillar fracture) and not to primary collagen fibrillar failure.[12] Besides geometric corneal parameters, new techniques permit a better understanding of the corneal bio-mechanics in order to get a better prediction of the corneal response to surgical or therapeutic interventions and to assist in the detection of early KC. [13][14][15]

There is an integrated relationship between preoperative corneal thickness, ablation depth, and flap thickness in determine the relative amount of bio-mechanical change that has occurred after a LASIK/PRK procedure.[16][17][18][19][20][21] Since there first reported cases of corneal ectasia after LASIK, numerous authors have reported the eye characteristics of these patients making emphasis on preoperative high myopia, RSB thickness lower than 250 microns, low preoperative corneal thickness (<500 microns) and abnormal topography (forme fruste keratoconus).[22][23][24][25] Randleman et al, compared normal uneventful LASIK patients with those developing corneal ectasia after LASIK or PRK and observed that the latter had significant abnormal preoperative corneal topographies, were younger (< 34 years), were more myopic (>8 diopters of mean refractive spherical equivalent), had thinner corneas before surgery (mean, 521 microns) and had less RSB thickness (256 microns).[3] Logistic regression analysis on their data showed abnormal topography as the most significant factor that discriminated cases from controls. [1] [3]

Down syndrome, family history of connective tissue disorders, ocular allergy, and mechanical factors such as eye rubbing and floppy eyelid syndrome, have also been identified as risk factors for corneal ectasia. [30][31]

Pointing out a patient with FFK and early KC is of major importance in the preoperative assessment, as most refractive procedures are contraindicated in patients with an ectasic preoperative condition due to the high-risk of induction and/or progression of the ectasia after the procedure.[32]

The fragmentation observed in the Bowman´s layer with the electron microscopy scanner tend to be specific of keratoconus, and it is believed to be the initial change leading for developing ectasia.[34]

Atypical hystopathogical variant has been described, where breaks in Bowman´s layer are not present, although clinically is the same pathology. Among different histopathologic variants the scarring of Bowman´s layer and anterior stroma positively correlate with fragmentation of collagen fibers and fibroblastic activity.[34][35]

It has been suggested that collagen lamellae released from their attachments to Bowman´s layer and become free to slide. This results in thinning without collagenolysis. [36] 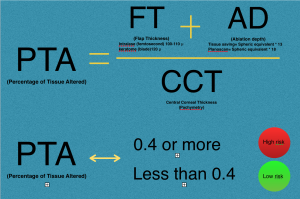 PTA formula formula for calculating ectasia risk in Lasik. For a better approach and specially in not clear cut cases other index and parameters must be evaluated.

It is now known that corneas that share similarities with ectatic corneas (keratoconus or pellucid marginal corneal degeneration) are at higher risk for post LASIK iatrogenic ectasia. Thus, efforts have been concentrated on using available specular topography, tomography, or biomechanical studies to recognize keratoconus (KC) in its earliest stages.

A screening strategy that weighs all of these factors was proposed: Ectasia Risk Factor Score System. Given a score between 0 to 4 to each one of the factors[1]. The scoring is a useful but still controversial index for preoperative LASIK candidates.

There are multiple videokeratographies software's used to evaluate pre-operative risk of ectasia. One of the first was developed by Rabinowitz[41] and by Maeda and Klyce at the LSU Eye Center in New Orleans, Louisiana.[42][43]

Using the Keratoconus Prediction Index (KPI) The system developed by Maeda and Klyce was able to differentiate keratoconus from a wide variety of other pathologies with a false positive rate of 98.7% and a false negative rate of 98.4%.[43]

The Rabinowitz software differs from the Maeda-Klyce system in three aspects:

Ambrosio and Belin developed multiple tomographic parameters extracted from a Scheimplfug device in order to improve the detection of "early"keratoconus. They were among the first to introduce the concept of gradient of thickness changes as a specific parameter to detect keratoconus[44]. 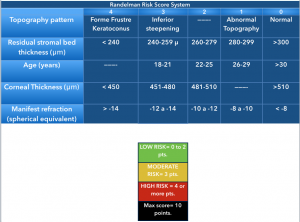 Marc Amsler In 1938, with a photographic placido disk, was the first to describe early corneal topographic changes in keratoconus before clinical or bio-microscopic signs could be noted. His classical studies of keratoconus documented the progression of the disease, from minor corneal surface changes to clinically identifiable keratoconus.

He classified keratoconus into clinical stages and an earlier latent stage identifiable only with the placido disk evaluation of corneal topography. The early stages were subdivided into two categories:

Amsler reexamined 286 eyes 3–8 years after the diagnosis, and only 20%, including 66% of the latent cases, show progression.

Progression was most likely to occur in patients between 10 and 20 years of age and decreased tendency to progression between ages 20 and 30, and low incidence of progression after 30 years old.[46]

Levene suggests that instrument tilt or poor alignment (hand held needed) of the keratoscope may result in incorrect observations of the corneal shape in the horizontal axis. Creating intra-observer and inter-observer discrepancies. [47]

In the 70´s Donaldson published a new technique for keratography: The photokeratoscope produces a topographic record of 55–80% of the total corneal contour, but it provides little information about the central 2-3 mm of the cornea.[48] Rowsey et al. used this instrument to study keratoconus in 827 patients.[49]

Krachmer et al. documented increasing in corneal curvature over time using the keratometer as a sensitive indicator of keratoconus.[50]

In 1984 the classic publication of Klyce et al. set the basis for the later development of computer-assisted videokeratoscopes algorithms. The computed process demonstrate to be a useful quantitative method with which to determine corneal shape, for clinical evaluation particularly in corneal surface irregularities.[51] 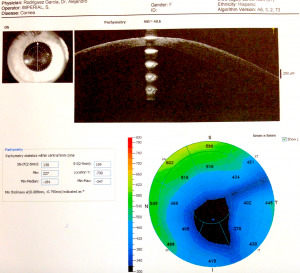 Of these, rotating Scheimpflug photography currently provides the most useful information for diagnosing early ectatic change. It is also a technique that is rapid and easy to perform, which would be a requisite for use as a screening tool.[54][55][52]

Keratoconus, from greek: (kerato- horn, cornea; and konos cone) is a condition in which the cornea assumes a conical shape due to noninflammatory thinning of the stroma, producing irregular astigmatism, myopia, corneal protrusion, progressively deteriorating vision. [50]

In 2015, international cornea specialists gathered efforts to define key points in the global consensus on keratoconus and ectatic diseases.[30] Moderate to severe keratoconus can be diagnosed clinically at the slit lamp with characteristic signs. However, diagnosis of mild, subclinical disease, requires computed systems such as Scheimpflug imaging or OCT, which can detect posterior corneal abnormalities.

Munson’s sign and Rizzuti’s classical clinical signs are observed in latter stages. Munson’s sign is a V-shaped deformation of the lower lid produced by the corneal conic protrusion in down-gaze. Rizzuti’s sign is a sharply focused beam of light near the nasal limbus.[56]

A Fleischer ring are pigmented rings in the peripheral cornea.[57] Resulting from iron deposition in basal epithelial cells, in the form of hemosiderin. They are usually yellowish to dark-brown, and may be complete or broken. Fleischer ring is present in most keratoconus corneas whereas prominent nerves are less frequent and specific for keratoconus.[58][59]

It has been estimated that up to 6% of patients with some sort of pre-clinically ectatic condition show up in clinical settings for refractive evaluation. [60][61][62]

Central 3 mm curvature zone readings are a very useful tool in pre-operatory evaluation. Manual keratometry is very sensitive indicator of astigmatism. Increased 0.5 diopters or more per year should make the clinician to be conservative and gather more information over time.[63]

Up to date the most important element of pre-operative evaluation. The mapping of the corneal surface, renders the calculated corneal dimensions.

Typically described by a peripheral band of thinning of the inferior cornea, there is an uninvolved area between the thin corneal area and sclero-corneal limbus. Central corneal thickness is usually normal. Pellucid is a progressive condition affecting both eyes, though can be asymmetric. The topographic pattern of the cornea classically resemble a butterfly, with against the rule astigmatism. [62]

Keratoglobus is a rare bilateral disorder in which the entire cornea is thinned most markedly near the corneal limbus, in contrast to the localized thinning centrally or paracentrally in keratoconus. [50] Most often keratoglobus is a congenital disease, but it may be secondarily acquired. This corneal pathology tend to produce extreme myopia, irregular astigmatism, and corneal scarring due to hydrops.[66]