A rare manifestation of the most severe degree of alobar holoprosencephaly, cyclopia, results when the eye fields fail to separate and develops as a single socket in the middle of the face with varying degrees of fusion of the globes. Since it is associated with very high neonatal mortality rates, miscarriages, and stillbirths; cyclopia is generally not encountered in clinical practice.

Cyclopia (also known as synophthalmia or cyclocephaly) is a clinical abnormality where fusion of both eyes can be seen in a single, central orbit located in the middle of the face. It is the facial expression of the most severe form of a congenital anomaly called holoprosenchephaly syndrome (HPE).

Synophthalmia, as a spectrum, occurs in 1/100,000 live births, out of which there is a female predominance of 58%[1]. The preponderance of female babies born with cyclopia may be explained by an increased number of male stillbirths with this anomaly.

The etiology of cyclopia is still largely unknown, but, potential heterogeneous risk factors have been identified[2], some with stronger evidence than others.

To understand how an anomaly like cyclopia occurs, we first need to have an understanding of the normal development of the neural tube, forebrain, and subsequently, the eye fields.

Around day 22, when the developing embryo is about 2 mm in length and is at the eight-somite stage, two small grooves develop on the sides of the developing forebrain. With the closure of the neural tube, these grooves become out-pouchings from the area of the primary brain vesicle, and are called optic vesicles. The optic vesicles grow laterally. As they come closer to the layer of surface ectoderm, the optic vesicles stimulate the overlying ectoderm to differentiate into a specialized mass of cells called the lens placode (which will become the lens) by secreting the growth factor BMP4. The ability of the surface ectoderm to respond to BMP4 depends on the expression of the PAX6 gene by the ectoderm.[4]

The development of the eyes involves a delicate interplay between various genes and transcription factors, the most important of which might be sonic hedgehog factor.

Even before neurulation occurs, there already exists the designation of a single eye field in the neural plate. This eye field area divides into two after development of the neural tube. This division can only occur under the influence of sonic hedgehog, which sets off the process that stimulates the growth of two separate eyes and orbital cavities.[5] It is thought that sonic hedgehog expressed from the prechordal plate causes down-regulation of the PAX6 gene and activation of the PAX2 gene, which causes the single eye field to divide into two.

Defects in the sonic hedgehog protein Shh or its signaling pathway are implicated in holoprosencephaly, since the Shh is necessary for the brain to develop into distinct left and right lobes. Division of the brain is a process that normally occurs between the eighteenth and twenty eighth day of gestation. Only subject to this division can the visual cortex begin to develop.

When an embryo reached development with only a single forebrain region (a condition called alobar holoprosencephaly), it will also be likely to develop only a single eye. When embryos reach the appropriate developmental phase with two separate cerebral hemispheres, they will go on to develop two eyes. Failure of the events that Shh sets into place leads to downstream lack of expression of PAX2, and subsequent lack of down-regulation of PAX6. Expression of PAX2 with down-regulation of PAX6 is necessary for the formation of a distinct visual field corresponding to each hemisphere. Hence problems with Shh signaling can lead to failure to develop two eyes.

The development of the forebrain and the eye fields is an intricate interplay between a plethora of genes and transcription factors. The fraction of what has been studied and what is understood is been summarized below.[6]

A child with cyclopia presents with microcephaly, since the lobes of the brain and the ventricles are hypoplastic. Perhaps the most striking feature of all, with the exception of a single central eye, is the absence of a nose or the presence of a proboscis above the eye in place of a nose. The single central eye is located in a single central orbit. In some cases it is one single eye (true cyclopia) in others it is partially fused eyes within the single orbit (synophthalmia). The mouth is usually not well formed. In some cases, it is a mound of soft tissue with a cleavage where the mouth would be with associated micrognathia.

Since cyclopia, (or in a broader sense, alobar holoprosencephaly) is not compatible with life, there are only a few anatomical features, evident on dissection, recorded in literature:[19]

Timely use of ultrasonography in the detection of features of alobar holoprosencephaly in the nuchal translucency (NT) prenatal scan (done at 11 to 136 weeks of gestation), can enable early diagnosis and, if required, termination of pregnancy within the recommended safe limit of gestational age (in accordance with the United States legislation in many states).

The prognosis for cyclopia, which is the extreme presentation of alobar holoprosencephaly, is grave. It is incompatible with life, and it is mostly seen in spontaneous miscarriages and stillbirths. More often than not, death of the fetus usually occurs in utero. In rare cases that a child is born with cylopia, death typically occurs a mere few hours after birth.

The maximum recorded lifespan of a child born with cyclopia is one day.[22] 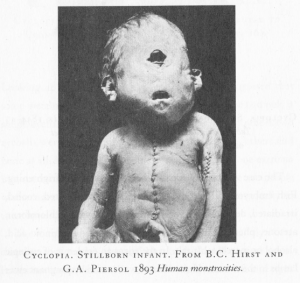 A picture of a cyclopic infant circa 1800, taken from Armand Marie Leroi's book, Mutants - On genetic Variety and the Human Body.

Cyclopia through the ages

The few recorded cases of cyclopia that have occured in humans remain in a very small proportion as compared to the recorded incidence in other species:

Mutants - On Genetic Variety and the Human body by Armand Marie Leroi.