Cross cylinder examination (otherwise known as Jackson's cross cylinder) is an examination used for the final fine-tuning of the axis and strength of astigmatism after its determination through retinoscopy, stellate cycle or automatic refractometry. With the advent of technology, techniques like retinoscopy and cross cylinder examination might seem outdated and useful only to the personnel of humanitarian missions. They do however provide an accurate alternative and their use gives a thorough understanding of the principles of refraction. 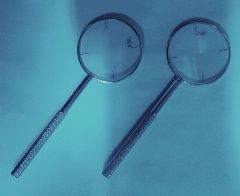 It’s naming derives from the fact that each of those cylinders can be considered as the combination of two equal yet opposite astigmatic lenses, placed vertically between them.

The sphere in the cross-cylinder is double and of opposite power to the cylinder. The two most commonly used in everyday practice are the following.

As the spherical equivalent of the cylinder is zero placing it in front of the patient doesn’t change the position of the Sturm cone, it can however reduce or increase the astigmatic error.

We start by correcting the axis of the astigmatic error and continue by fine tuning the power.

We start the standard examination of visual acuity by placing the patient in front of a Snellen’s chart.

We place the sphere and the cylinder as determined by another method on the test frame. We have the patient looking at smallest line he can see reasonably comfortably. The examiner holds the instrument, with its handle being the projection of the astigmatic axis. In this way there is a positive and a negative correction on equal distance.

Correcting the power of astigmatism

If the difference of the astigmatism found by the cross-cylinder method is more than 1.0D , we need to numerically subtract from the sphere half of the alteration found, in order to keep the spherical equivalent unaltered.