Conjunctival Biopsy in the Diagnosis of Ocular Sarcoidosis

Sarcoidosis is a granulomatous disease that affects multiple organ systems. As a multi-system disease, it can present with a variety of symptoms which often makes diagnosis challenging. Ocular involvement occurs in approximately 25-38% of cases of sarcoidosis[1] [2] [3] and is the first sign of disease in about 20% of cases[4]. Typical ocular signs of sarcoidosis include granulomatous iridocyclitis, retinal periphlebitis, and/or chorioretinitis[5]. However, other diseases may present with similar findings, including tuberculosis, syphilis, and primary intraocular lymphoma[6] [7] [8].

Performance of a thorough slit lamp examination can identify conjunctival nodules in 7-17% of patients with ocular sarcoidosis[1][9]. These conjunctival findings appear as small, yellow or tan nodules primarily in the lower cul-de-sac. They may also appear on the lacrimal gland. Classically, the lesions are described as having a size and appearance similar to that of a millet seed[10].

To definitively diagnose sarcoidosis, histologic evidence of granulomatous inflammation is required. Classically, non-caseating granulomas (aggregates of epithelioid histiocytes) may be found within the substantia propria[11]. A minimal cuff of lymphocytes and plasma cells surround the lesions. Multinucleated giant cells may or may not be present within the granuloma. Two other microscopic features often present, yet not pathognomonic, in the granulomas include Schaumann bodies and asteroid bodies. Schaumann bodies are laminated concretions composed of calcium and proteins, while asteroid bodies are stellate inclusions enclosed within giant cells[12]. 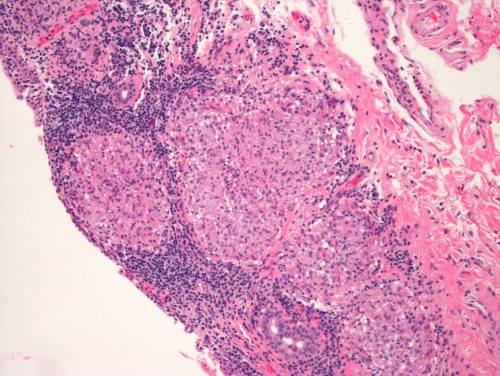 Different tissue sectioning and analysis techniques may explain the wide range of conjunctival biopsy yield obtained; however, few studies actually describe their histologic methodology. A retrospective case series conducted at the University of Illinois at Chicago reported the diagnostic yield of directed conjunctival biopsy and compared an institutional standard tissue sectioning method to a multi-plane sectioning technique[24]. The surgical technique is described below:

A positive result was defined as the presence of discrete non-caseating granulomas identified in at least one section. If the initial biopsy result using the standard technique was negative, the tissue block underwent repeat sectioning using the multi-plane technique.

The report found that directed conjunctival biopsy using standard histologic processing method produced a yield of 43%. Of the biopsies that were negative via the standard histologic method, one additional positive case was identified when re-sectioned using the multi-plane method. When both sectioning techniques were taken into consideration, there was a cumulative yield of 63%. None of the patients with biopsies consistent with sarcoidosis were on topical corticosteroids at the time of biopsy, while several with negative biopsies were in patients on topical corticosteroid drops for at least one month before biopsy. There were no complications of biopsy in this series[24].

Directed conjunctival biopsy is an easy procedure that may allow for tissue diagnosis of sarcoidosis. Conjunctival biopsy carries a low risk of morbidity and, if possible, should be considered before more invasive procedures. Because a biopsy may include normal conjunctiva in addition to nodules, and granulomas are not uniformly distributed, the increase in the number of sections through different levels at different depths obtained when using the multi-plane sectioning technique may enhance the likelihood of detecting granulomas.