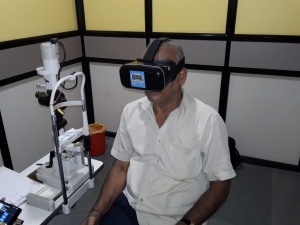 Visual Field Perimetry, even though a cornerstone of glaucoma diagnosis, has always been a cumbersome and difficult test to administer as well as undergo. It was the only standard test to assess the functional damage due to glaucoma for several decades and had not evolved much despite rapid advancements in technology. This is now the era of Virtual Reality, and several innovators started to develop head-mounted visual field testing devices derived from gaming headsets including the extremely low-cost Google Cardboard.

Virtual Reality is an upcoming field and Perimetry is only one of the aspects of Ophthalmology being advanced by it. The Periscreener[1] developed out of a collaboration between Aravind Eye Hospita[2]l and Vellore Institute of Technology, essentially consists of a low-cost Google Cardboard headset, two ordinary android smartphones, and a Bluetooth clicker. It was crude and did only suprathreshold testing, but worked as a prototype.

VirtualEye[3] is a head-mounted, eye-tracking perimeter, that does the equivalent of a full threshold 24-2 visual field. In addition to manual patient response with a click, it can also do an innovative technique called Visual Grasp, where the eye tracker detects change in gaze as detection of stimulus. This mode utilizes the natural tendency to look at a new, moving, or transient visual stimulus. The hypothesis is that the M-cell system inputs to a reflex that, unsuppressed, drives an eye movement to acquire the novel target to the fovea. This mode does not require a manual input from the patient and does not require the cortical processing and decision making required for manual mode. 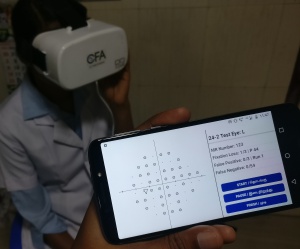 In India, C3 Field Analyzer(C3FA)(Alfaleus Technology Pvt Ltd, India) is developed as a commercial product by Indian Startup company Alfaleus in collaboration with Remidio[10] and is currently capable of glaucoma threshold field testing.[11] The advantages of a compact, portable, head-mounted perimeter are numerous. The patient need not sit in a fixed position and can freely move their head. In fact, they be standing, sitting, lying down or even moving while doing the test. Bedridden patients and wheelchair patients can easily do this virtual reality perimetry. The machine can be carried in hand and taken to the patient if they are difficult to mobilize. They work on a rechargeable battery pack and does not need an external power supply. It does not require an internet connection to connect wirelessly to the operator’s smartphone which displays the real-time stimuli and report while the test is ongoing. 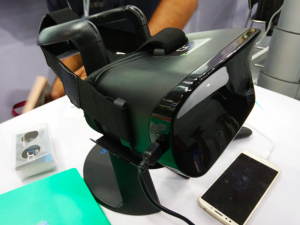 The subject wears the Virtual Perimetry headset while seated comfortably. In case the subject is more comfortable lying down or even standing up, that is also acceptable.

The subject also holds a wireless clicker to respond to the visual stimuli.

The operator activates the headset from their controls on the Tablet computer.

This displays a visual acuity test and to which they respond verbally.

Then the appropriate visual field test is started.

Subject keeps both eyes open and looks at the fixation point, while stimuli are displayed in the periphery.

When the subject sees the stimuli, they are supposed to press the button on the wireless clicker.

Live result of the test will be continuously be displayed on the Tablet computer.

Once the tests for both eyes are completed, the final report is displayed and can be exported as a PDF file.

Headset can be removed as soon as the test is completed, and can also be removed during the test if the subject wants to take a pause.