Chopping techniques use manual instrument forces that exploit the lamellar orientation of the lens fibers, which allows for natural fracture planes in a dense nucleus. This technique allows for lens segmentation to occur in just seconds with minimal manipulation of the lens zonules, making it an excellent technique in cases of loose zonular support. Here we give background and describe in detail the vertical chop technique. 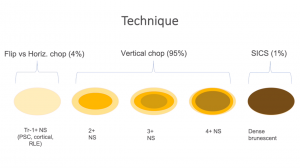 Two main categories of chopping techniques exist; horizontal and vertical. The horizontal chop, first described by Kunihiro Nagahara, MD[1], involves bringing the phaco tip and the chopper tip toward one another in the horizontal plane, dividing the nucleus. While the vertical chop technique also involves dividing the lens by bringing the phaco tip and chopper tip together, in this technique in the chop maneuver is performed in the vertical plane.[2] One of the key benefits of utilizing chopping techniques is that the segmentation of the nucleus is achieved predominantly by manual instrument forces instead of ultrasonic energy, decreasing the overall energy burden during cataract surgery. The technique can also be performed rapidly, increasing surgical efficiency.

Here we will take a deeper look at the vertical chop technique, which is extremely versatile and can be utilized for a large percentage of cataract operations. It can be particularly useful for more complicated cases involving dense cataracts, weak zonules, capsulorhexis tears, and small pupils.[3]

The initial steps of the surgery are the same as for other phacoemlusification techniques:

1)     Create a temporal side port incision and fill the anterior chamber with topical anesthetic, followed by viscoelastic.

Step 6: Embed the phaco tip into the nucleus

4)     Perform hydrodissection and rotate the lens within the bag, ensuring that the lens is freely mobile.

5)     Aspirate the superficial cortex and epi-nucleus without using any phaco energy to expose the underlying nucleus.

Step 7: Impale the nucleus with chopper

6)     Embed the phaco tip centrally into the nucleus with a high vacuum setting to keep it fixed in place.

7)     Impale the nucleus with a vertical chopper (vertical choppers have a pointed tip, rather than a rounded paddle or curved hook as are often used for horizontal chopping).

8)     Drive the chopper toward the phaco tip

10)   Rotate the lens 90 degrees, burrow into the center of the nucleus, and repeat the above steps to divide the lens into quadrants.

12)   During the removal of the final quadrant, you may guard against posterior capsular rupture either by turning the pointed tip of the chopper horizontally (rather than pointed down, toward the capsule), or you may replace the chopper tip with a spatula between the final lens quadrant and the posterior capsule.  Some vertical choppers have a sharp chopper on one end and a flat spatula on the other for this purpose.  The Koch-Nagahara Karate Chopper from Katena (no financial interest) is one example – this is my instrument of choice for this technique.

The vertical chop is an excellent all-around phacoemulsification technique that can efficiently address a broad range of cataracts – from moderate to very dense. For very soft lenses, such as posterior sub-capsular cataracts (PSC) or refractive lens exchanges (RLE), this technique is suboptimal as the sharp chopper does not spread a soft lens as efficiently and poses a greater risk of capsular compromise.  In these cases, a flip technique or a horizontal chop are recommended.

The vertical chop technique offers several unique advantages, particularly in certain settings. Unlike the classic horizontal chop technique, which requires sliding the horizontal chopper under the capsule to “hook” the equator of nucleus, the vertical chop technique is performed entirely within the capsulorhexis, virtually eliminating the risk of capsular tear during this step.   This is particularly helpful with a smaller pupil – the chopper tip is always in view.  Also, in the rare instance where there may be a runout in the capsulorhexis, this technique limits the risk of further extension.

The vertical chop is also particularly effective in dividing dense lenses.  Whereas the blunt paddles often used for horizontal chopping are great for soft cataracts, these paddles are not as effective in splitting a very dense, fibrous cataract.  Because these blunt instruments experience greater resistance as they are drawn towards the phaco tip, there can be a build-up of compression tension between the two instruments.  Sometimes this tension can result in unexpected movement of the lens, which can strain the zonules or even result in capsular compromise.  In contrast, a sharp vertical chopper can easily penetrate a dense lens with little resistance, resulting in a controlled and efficient nuclear division.  This benefit is amplified when the zonular support system is compromised.  Further, a dense lens may be quickly and easily divided multiple times – sometimes I will divide a very dense lens into 8 or even 16 pieces - to limit risk the amount of phaco energy required, thereby avoiding endothelial compromise.

The vertical chop technique is a highly useful tool with advantages in both safety and efficiency.  This technique can be learned at any stage.  Although once considered a more “advanced” technique, it can certainly be learned by resident trainees as either a primary or ancillary technique. It is also a very useful technique in developing parts of the world where cataracts tend to be more mature at the time of presentation.