Usher syndrome, also known as Hallgren syndrome, is a rare genetic condition that is characterized by progressive vision and hearing loss.

Usher syndrome has been classified into three major subtypes: I, II, and III.

While all three types involve progressive vision loss due to retinitis pigmentosa (RP), they are categorized according to the genes responsible and the onset and severity of the signs and symptoms.

Usher Syndrome Type I is the most severe subtype. It is characterized by profound congenital hearing loss, RP, and absent vestibular function.

Usher Syndrome Type III involves progressive hearing loss, RP, and varying degrees of vestibular dysfunction. Onset for type III is typically within the second to fourth decades of life. These patients also tend to have better vision than the other subtypes.[1]

The mode of inheritance for Usher Syndrome is autosomal recessive. 13 genes and 16 loci have been found to contribute to Usher Syndrome.[2]

In general, genes associated with Usher syndrome provide instructions for the synthesis of proteins involved in normal hearing, balance, and vision.[3]

Usher syndrome is a rare disease in the general population with a prevalence of 3 cases per 100,000 in the population.[4] It is significantly more prevalent the genetically deaf accounting for approximately 5-10% of those with the handicap.[5] In the United States it occurs in approximately 1 in 23,000 people.[6] It has been found that Type I Usher Syndrome is more common among people of Ashkenazi Jewish or French Acadient descent.[7][8] Type III accounts for only about 2% of all cases. It has been shown that Type III occurs more frequently in the Finnish population.[9]

Hearing loss is due to a defect in the inner ear hair cells. Mutations in the USH genes result in defects of the corresponding proteins that are components in properly forming stereocilia bundles and growths. These defects cause deficits in hearing and vestibular function. Additionally, transmission of neuronal signals from inner ear hair cells is potentially compromised by USH mutations.[2]

Vision loss results from retinitis pigmentosa (RP) which involves the degeneration of retinal cells. The exact mechanism of vision loss from Usher Syndrome is not completely understood, but current literature supports the theory that Myosin VIIa, coded by MYO7a, has a direct involvement in transporting melanosomes and phagosomes in retinal pigment epithelium (RPE) correctly and translocating RPE65 for visual pigment regeneration. Myosin VIIa plays a critical role in transporting rhodopsin, proteins, and photoreceptors in RPE cells and photoreceptors. USH2 genes are also directly responsible for maintaining photoreceptor health and mutations in USH2 will interfere with the USH2 complex in the precilliary membrane complex and cause retinal degeneration usually in the second decade of life. USH1C mutation is also conjectured to produce truncated harmonin protein in abnormal splicing that causes retinal degeneration.[2]

At present, Usher syndrome is incurable. Consequently, it is important to diagnose children early before they develop worsening visual problems.

Genetic Testing: Definitive diagnosis of Usher Syndrome type 1 involves identifying a homozygous proband mutation in the setting of positive symptoms and family history. The first gene to identify using single-gene sequencing is MYO7A. Only if a MYO7A mutation is absent or present in one gene should gene targeted deletion/duplication for MYO7A be done. Multigene panel is also an option for identifying mutations in the other genes mentioned in the genetics section. If single-gene or multigene testing fails to show mutations, a comprehensive genomic testing may be used to identify a mutation.[10] 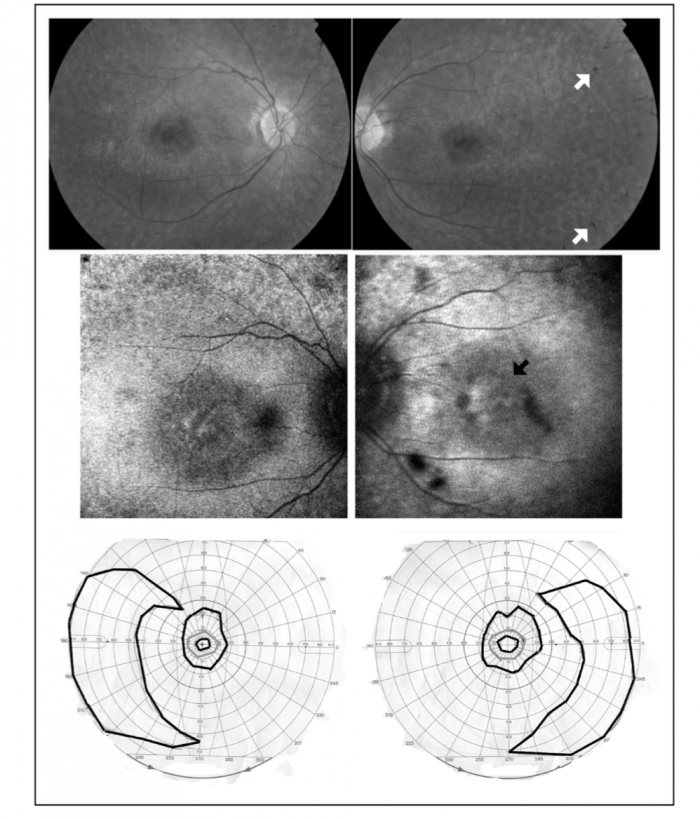 Usher Syndrome I: Patients are born profoundly deaf and lose visual acuity within the first decade of life. Due to absent vestibular dysfunction, patients exhibit balance difficulty and as children learn to talk more slowly.[12]

Usher Syndrome II: In contrast to Type I, patient with Usher Syndrome II do not have congenital deafness. Rather, they have moderate-to-severe hearing loss that does not degrade over time. Furthermore, these patients do not exhibit any difficulty with balancing. Onset of visual loss in these patients is in the second decade of life. These patients may also have preserved visual acuity into the third and fourth decades of life.[2]

Usher Syndrome III: Similar to Type II, patients with Usher Syndrome III do not have congenital deafness. Instead they experience progressive hearing loss. Additionally, they exhibit varying degrees of balance issues due to mild to moderate vestibular dysfunction.[12]

Even though much progress has been made in elucidating the genetics and pathophysiology of Usher syndrome, there is still no cure. Treatment focuses on managing the auditory, balance, and visual manifestations.

Initial Diagnosis: The following evaluation modalities may be useful to establish the extent of the disease[10]:

Treatment of Vestibular Manifestations: Combination of RP which manifests as tunnel vision and night blindness with vestibular dysfunction predisposes patients to accidental injury. It is recommended that patients participate in well-supervised sports activities to compensate for balance problems by becoming more adept at somatosensation.[10]

Treatment of Visual Manifestations: Because visual problems result from Retinitis Pigmentosa which is currently incurable, management involves the use of low vision aids, portable lighting, and potentially a guide dog if visual acuity loss is severe. Various supplements such as Vitamin A, DHA (docosahexaenoic acid), and Lutein may be helpful in delaying disease progression, but the literature is equivocal on efficacy.[14]

Surveillance: It is recommended that patients have routine ophthalmologic evaluation to detect possible complications of the disease process such as cataracts.

Usher I and II have congenital onset of hearing loss. As a result, hearing aids provide limited benefit. Because of the gradual progression of hearing loss in Usher Syndrome Type III hearing aids are often used successfully. Usher types I, II, and III have progressive loss of visual acuity by midlife.

Usher syndrome is a rare genetic condition that involves various degrees of hearing and vision loss over time. It is classified into three subtypes (I, II, and III) according to onset and severity of symptoms. Type II does not have vestibular dysfunction. It is at present incurable. However, gene therapy is one of the potential treatment modalities that are being researched and developed for potential future cures.[15]