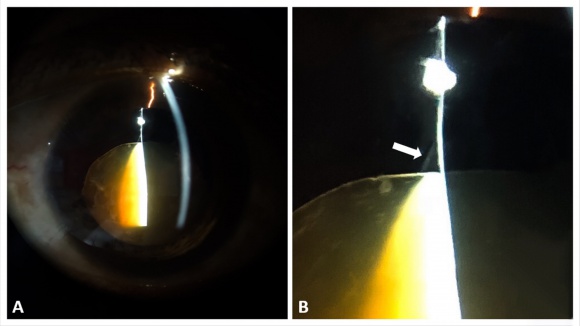 The triangle sign is seen in patients with Morgagnian Cataract with the resorbed cortex. This finding is named because of the triangular space formed by the anterior and posterior lens capsule and the nucleus below.[1]

This sign is commonly seen in patients of Morgagnian Cataract with the resorbed cortex. It has been suggested that the process of cortical fibre dissolution occur at a higher rate as well as en masse in the Morgagnian cataract.[2] The liquefaction of the lens cortex leads to the sinking of the lens nucleus in the capsular bag. In some cases, with poor access to ophthalmologic care, delay in the treatment may lead to the complete resorption of the liquefied cortex leaving behind the transparent capsular bag and the sunken dense nucleus.

Slit lamp examination with a narrow-slit beam angled at 60° with a magnification of 16x-20x focused above the nucleus shows a triangular area bounded anteriorly and posteriorly by the anterior and posterior lens capsule and the base of the triangle formed by the lens nucleus.

This sign is of diagnostic value for the residents in differentiating Morgagnian Cataract with resorbed cortex from inferiorly subluxated cataractous lens. A clear transparent space is observed above the cataractous lens in both scenarios and can lead to confusion when examined under diffuse illumination with a slit lamp. The triangle sign can be helpful in making the correct diagnosis. This sign is present in the cases of Morgagnian cataract with resorbed cortex due to the presence of intact zonules and capsular bag whereas it is absent in cases of inferiorly subluxated cataractous lens due to loss of zonules.