Described in 1950 by Phillips Thygeson in a case report series, Thygeson's superficial punctate keratitis (TSPK) is an insidious, chronic and recurrent disorder, characterized by small and elevated oval corneal intraepithelial, whitish-gray opacities, extending to the entire anterior surface of the cornea of both eyes. Corneal lesions show a tendency for the central pupillary area distribution with mild or absent conjunctival inflammation and no association to systemic disease. [1][2]

There are no specific data on the epidemiology of the disease. TSPK may affect both sexes, but a higher incidence has been reported in females. [1] The onset of the disease occurs between the second and third decades of life, with a range of 2.5 to 70 years of age (median: 29 years). It is probable that the prevalence and distribution of the disease is underestimated, as few publications can be found over the past years.

The pathophysiology of TSPK remains unknown. Both, viral and immunologic mechanisms have been implicated. Adenovirus, herpes simplex virus, and varicella zoster virus, have all been implicated as a possible causes of the disease. However, Braley and Alexander [3] provided questionable results suggesting a virus may be responsible for TSPK, and in 1974, Lemp, et al [4] isolated varicella zoster virus from the corneal surface of a 10-year-old boy with TSPK. More recent studies using polymerase chain reaction (PCR), were not able to detect varicella zoster virus from eyes with TSPK, providing doubts this virus is a causative agent. [5][6]

On the other hand, an immune based etiology has also been proposed, since the presence of the HLA-DR3, a class-II MHC molecule associated with immune response genes and multiple autoimmune disorders (Gluten enteropathy, Addison's and Sjögren's syndromes, systemic lupus erythematosus, diabetes mellitus) has been positively implicated to patients with TSPK. [7] 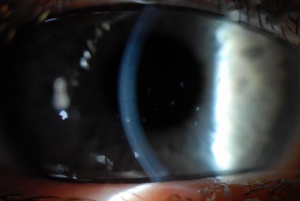 The disease is usually bilateral, but may be asymmetric. Patients frequently experience photophobia, tearing, burning, foreign body sensation, and irritation during exacerbations. Pain, and blurry vision are also common [7]. Redness of the eyes or mucous secretion may be present. The course of the disease is variable, one episode can last from 1 to 2 months and the remission can take as long as  6 weeks.  It is believed that after 4 years the disease disappear in most cases without complications. [7] Nevertheless, there are reports from patients observed over the course of more than 20 years with TSPK in a settle of a chronic use of steroids, and in one case, the disease lasted for 41 years.[8] 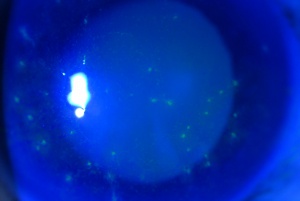 The typical TSPK is an elevated or flat round-oval shaped, gray-whitish lesion, occupying the central intraepithelial corneal area with no underlying stromal edema or inflammation. The acute lesion may stain minimally with fluorescein, and may or may not stain with vital dyes (rose bengal or lissamine green). [9]  In occasions, the lesion is described as starry, and in the late stages, a sub-epithelial scar can be noticed. Around 20 of them are present in each eye, but up to 50 lesions have been reported. The lesions tend to disappear without leaving a trace in the course of 4 to 6 weeks. Corneal sensitivity is usually preserved or slightly diminished. The conjunctiva remains quiet but in a few cases, redness and filament formation may also be found. [9]

The histopathology of TSPK is characterized by intra and intercellular edema at the level of the corneal epithelium [10][11] and involvement of the subepithelial nerve plexus, Bowman’s membrane, and the anterior stroma.These changes are most severe in eyes with a longer duration of TSPK. [2][11] Under confocal microscopy, keratocytes show highly reflective nuclei and cell bodies of irregular size, orientation, and shape. These changes were present under the intraepithelial lesions, and in other areas where lesions were not present. They are thought to be related to the duration of the disease, and were not seen in normal controls. [11] There is no evidence of the presence of inflammatory cells in the areas of corneal stroma adjacent to the intraepithelial lesions. [10] In a more recent study using confocal microscopy, Kobayashi found three findings that were consistently present in all patients with TSPK: aggregates of highly reflective deposits with a starburst-like appearance that might correspond with punctate lesions at the superficial and basal epithelial cell layers, invasion of Langerhans cells at the basal epithelial layer, and anterior stromal haze. [12]

Based on the clinical course and the clinical manifestations of the disease, particularly the typical corneal lesions, the diagnosis of TSPK should not represent a problem. However, there are several clinical entities that may resemble TSPK and should be considered in the differential diagnosis:

Multiple therapeutic strategies have been tried over the years for the management of TSPK, but none of them have resulted to be entirely successful. Antibiotics have not been effective so far. [13] On the other hand, antivirals have shown mixed results. While mild improvements have been reported with trifluridine therapy, [14] idoxuridine has been shown to cause persistent anterior stromal ghost opacities and scarring, and is therefore contraindicated for TSPK. [3][4][15][13]

Topical lubricants are only effective for partially relieving the clinical symptoms of TSPK. [16] On the contrary, topical corticosteroids are considered as mainstay treatment for TSPK because they are highly effective in controlling both, the clinical signs and symptoms of the disease, although there has been a lot of non-proven speculations that they may prolong the clinical course of the disease. [9][13] An important point of corticosteroid treatment for TSPK is that in most cases, they must be tapered gradually over a long period of time (months) until an infrequent, but regular dose is achieved (i.e. weekly or biweekly). The goal of corticosteroid therapy is to administer the minimum dosage and strength possible to control the symptoms of TSPK. [8][17]

Due to its therapeutic success and security profile compared to corticosteroids, topical cyclosporine (CsA) has been proposed as first-line treatment for patients with TSPK. [14][18][19] However, CsA has not been compared to corticosteroids in a controlled clinical trial for the treatment of TSPK, and one well recognized inconvenience of topical CsA is stinging at instillation that may compromise therapeutic compliance. [18][19] Another steroid sparing agent that has been used with some success is topical tacrolimus drops [20] and ointment [21].

Another alternative for severe TSPK is the use of extended-wear therapeutic soft contact lenses, although potential complications such as microbial keratitis may occur. [22]Contact lenses improve symptoms by covering the elevated corneal lesions and nerves, which are constantly in friction with the palpebral conjunctiva during blinking. [13][15]

There have been a few case reports of TSPK patients treated with excimer laser phototherapeutic keratectomy (PTK) with only partial improvement of signs and symptoms, but with a high rate of recurrence of the corneal lesions, making it no alternative for the management of the disease. [23][24][25]

In summary, the following recommendations have been made with respect to the treatment of TSPK. The benign course of the disease requires the use of lubricant eyedrops and topical surface steroids, at low and infrequent dose for prolonged periods of time with close monitoring of intraocular pressure and cataract formation. [15] Topical CsA or tacrolimus can be used as an alternative treatment to steroids, taking into account the possibility of intolerance, cost and poor compliance issues. [18][19] In severe cases, extended-wear therapeutic contact lenses could be used for the relief of TSPK symptoms, monitoring for corneal infections and intolerance. [23] After the diagnosis is established, the disease may last for many years with a waxing and waning clinical course, and a tendency to disappear without clinical sequelae.[26]