Over the past two decades, new innovations have led to a dramatic increase in the number of microsurgeries performed. However, traditional microsurgery using the traditional binocular microscope can lead surgeons to deleterious neck and back postures that cause musculoskeletal fatigue and injuries, which has been associated with reduced surgical longevity [1]. The prevalence of neck, upper body, or lower back symptoms among ophthalmologists has been reported to be as high as 62% [2][3].

Three-dimensional (3D) display systems were first developed for aircraft and military use. Innovative, ground-breaking developments brought this technology to the operating theater. Live three-dimensional (3D) display systems have been adopted in medicine, particularly after the creation of the TrueVision 3D Visualization System for Microsurgery (TrueVision Systems, Inc, Santa Barbara, California), and these have applications in many surgical specialties.

Conventional 3D systems are classified as either active or passive systems.

The term “heads-up surgery” describes the performance of microsurgical procedures not by looking at the eyepieces of the microscope, but by viewing the microscopic image on a panel display sent from a 3D camera [4]. It is derived from the so-called “head-up display”, a display system first used in aircraft flight decks which projects an image into the normal field of view. This display system allows visualization in a “heads-up” position. These terms differ in that the image in heads-up surgery is shown on a display rather than projected.

Heads-up surgery eliminates the constraints imposed by the standard binocular microscope and minimizes fatigue by providing greater degrees of freedom to operate in a more neutral, physiologic position, without affecting the image quality or technical difficulty. It is also potentially an aide to surgical teaching since multiple people in the same room can share the high-resolution view of the surgeon.

Cataract and the anterior segment

The TrueVision 3D Surgical System is a camera unit that attaches to standard surgical microscopes, sending stereoscopic images and video to a 3D, high-definition (HD), large-screen monitor positioned a few feet from the surgeon, providing visualization in real time. The US Food and Drug Administration (FDA) has granted clearance for the TrueVision Refractive Cataract Toolset, an application that provides 3D graphical overlays for image-guided cataract surgery. More recently, TrueVision has developed the TrueGuide and the TruePlan applications, which have been designed for intelligent surgical planning to aid in achieving targeted refractive outcomes, including the use of toric intraocular lens (IOL) [7]. In one study, Solomon J reported results of toric IOL implantation using TrueGuide. 83.3% of eyes were corrected to <0.50 D of cylinder, and 100% were corrected to <1.00 D cylinder. In addition, 80% of the eyes had final vision 20/20, and 100% of the eyes achieved 20/25 or better. [7] [8]

Other anterior segment surgeries have been performed using the heads-up system, including amniotic membrane transplantation [9] and corneal surgery. Mohamed YH et al. have reported the first case of corneal surgery using the heads-up system [10]. They performed a non-Descemet Stripping Automated Endothelial Keratoplasty (nDSAEK) for post-traumatic bullous keratopathy, and reported great visual experience and ergonomics. However, the authors state that frequent adjustment of focus was needed for clear stereoscopic view of the flap.

The heads-up surgery in the retina world was introduced by Eckardt and Paulo[4]. They conducted a study to assess whether vitreoretinal surgery could be performed using the heads-up display system with a 3D, high dynamic range surgical camera, a HD LCD display which requires the use of passive 3D polarized glasses. The authors suggested the main advantage of heads-up technique over standard surgery is the superior ergonomics. However, they report that this technique was not more difficult than traditional surgery. Additionally, the brightness of the surgical field can be superior than that of traditional surgery, without exposing the retina to additional light. Electronic amplification of the camera's signal to increase brightness might be helpful in situations of vitreous hemorrhages, opaque media, or darkly pigmented fundi. 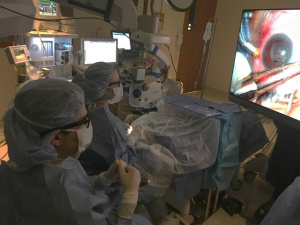 Other heads-up 3D visualization systems in ophthalmology include:

Ivan Sutherland’s early experiments in the 1960s led to the development of the “head-mounted display systems”, abbreviated HMS. Sutherland constructed an HMS that displayed a simple wireframe model on a binocular display. [19] The main applications of HMS have included military, police, firefighting, and civilian-commercial use, namely in video gaming and sports. HMS has been used by authorities to display tactical information such as maps or thermal imaging data while viewing a real scene.

Sony (Sony Electronics, Inc, Tokyo, Japan) has been a pioneer in the field on head-mounted display, and first ventured into the operating room in 2012. The HMS-3000MT [20] is a personal viewing system that provides a 3D color video display of images from 3D surgical camera systems. It consists of the HMI-3000MT image processor unit plus the HMM-3000MT head mounted display that provides a stereoscopic visualization from the imaging system, and provides a 3D color video display of images from the 3D, full-HD surgical camera systems MCC-3000 MT. This system has the option to connect a second head mounted monitor, giving other theater staff a simultaneous 3D view. This device is compliant and certified for IEC 60601-1 and product safety standards in the U.S.A., Canada, and Europe.

Depth perception inside the HMS device requires different images for the left and right eyes. The head-mounted system differs from conventional 3D systems by showing two simultaneous images, one for each eye, avoiding the ghosting image effect caused by cross-talk in active 3D systems. The system of dual video inputs using two independent organic light-emitting diodes (OLED) panels offers a complete separate video signal to each eye, which provides the maximum resolution for each image, and maximum frame rate for each eye [20]. The HMS provides a high-resolution (1280 x 720) stereoscopic images with precise reproduction of colors and blacks.

Other head-mounted systems include:

Three-dimensional display systems are showing ever more promising results in the field of ophthalmology, both for anterior and posterior segment surgeons. Heads-up surgery using 3D display screens has been increasingly accepted due to their advantages in terms of ergonomics and surgical teaching/coordination. The use of head-mounted display systems is a novel emerging concept in ophthalmology. In our experience [18], the Sony HMS-3000MT helmet was well-fitted into the surgeon’s heads and its weight was not uncomfortable. The helmet allows the surgeon to see his/her own hands and surgical instruments by looking down. We consider HMS technique for vitreoretinal surgery to have a short learning curve. In addition to the great image quality, we experienced great depth perception and spatial orientation. The wide 45º horizontal viewing angle enables a more natural visual experience. Since the assistant surgeons in the operating theater can also wear a helmet and experience simultaneous, stereoscopic images as the main surgeon, this technique may prove to be an excellent tool for live surgery teaching and training in the future.