Teprotumumab is a fully human monoclonal antibody that targets the insulin-like growth factor 1 (IGF-1) receptor (IGF-1R). It was approved by the FDA in January 2020 for the treatment of thyroid eye disease.[1]

Graves’ orbitopathy or thyroid eye disease (TED) is an autoimmune disease characterized by proliferation of orbital fibroblasts which release glycosaminoglycans and result in increased extraocular muscle size and orbital fat volume.[2] The typical course of the disease, also known as Rundle’s curve, involves an initial inflammatory progressive phase leading to a static plateau.[3]

The pathogenesis of TED is characterized by infiltration of the orbit by fibrocytes and lymphocytes which release cytokines activating orbital fibroblasts (Figure 1).[4] These cytokines include IL-1ß, IL-6, IL-16, TNF-α, RANTES (regulated on activation, normal T cell expressed and secreted), and CD40 ligand. [4] Fibrocytes differentiate into fibroblasts which further differentiate into myofibroblasts and adipocytes. [4] Interactions between these cells result in the production of glycosaminoglycans and adipogenesis leading to orbital tissue remodeling. [4] 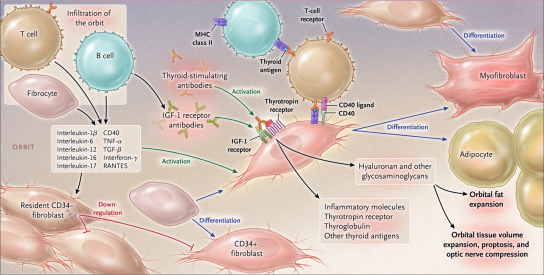 In Graves’ disease, thyroid stimulating immunoglobulins (TSI or GD-IgG) stimulate the thyroid stimulating hormone receptor (TSHR) or thyrotropin receptor leading to increased levels of thyroid hormone.[4] The detection of the TSHR in orbital tissues supports its involvement in TED, but its role is not well understood.[5][6][7][8]

A second receptor, the IGF-1R, has been shown to play a significant role. The IGF-1R is a tyrosine kinase receptor containing two alpha subunits and two beta subunits linked by two disulfide bonds.[9] The involvement of the IGF-1R in TED was first proposed by Weightman et al who showed that immunoglobulins from patients with Graves’ disease interacted with IGF-1 binding sites on orbital fibroblasts.[10]Further research demonstrated the overexpression of the IGF-1R by orbital fibroblasts, B cells and T cells in patients with Graves’ disease.[11][12][13][14]The importance of this receptor in the pathogenesis of TED has been demonstrated by the mediation of hyaluronan synthesis and release of cytokines IL-16 and RANTES through the IGF-1R.[14][15] In addition, the IGF-1R forms a physical and functional complex with the TSHR.[11] In fact, blocking the IGF-1R with a monoclonal antibody can attenuate signaling initiated from either receptor.[11] These findings helped lay the foundation for targeting the IGF-1R pathway to treat TED with a monoclonal antibody, teprotumumab.

Teprotumumab is a fully human monoclonal antibody that binds to the ligand binding extracellular alpha subunit of the IGF-1R (Figure 2).[16] Formerly known as R1507, teprotumumab was first developed and studied with regards to its use for cancer therapy, but has fallen short of making significant differences in prognosis in multiple studies.[17][18][19] It has recently been repurposed for TED. The mechanism of teprotumumab in TED is not fully understood. However, at the molecular level, as suspected, studies have found that teprotumumab reduces levels of the TSHR and IGF-1R on fibrocytes and attenuates TSH-mediated IL-6, IL-8, and TNF-alpha expression.[20][21]The phase II and III clinical trials also have provided insight into the effect of this medication through inhibition of the IGF-1R, as described below.[22][23] 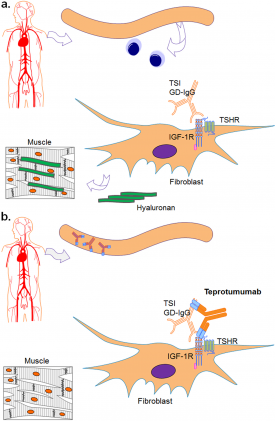 Figure 2. Mechanism of Action of Teprotumumab. From Eye. Douglas RS.Teprotumumab, an insulin-like growth factor-1 receptor antagonist antibody, in the treatment of active thyroid eye disease: a focus on proptosis, 33(2); 185.[24] Copyright © 2018, Raymond S Douglas. Reprinted without modification from an open access article under the terms of the Creative Commons Attribution 4.0 International License.

A two compartment population pharmacokinetic model was able to estimate that after treatment (10mg/kg for the first intravenous session and 20mg/kg infusions every 3 weeks thereafter for a total of 8 infusions), teprotumumab reaches a mean trough concentration (Cmin) of 176 µg/mL, mean peak concentration (Cmax) of 632 µg/mL and steady state AUC (area under the plasma concentration-time curve) of 138 mg·hr/mL.[1][25]The mean peripheral and central volume of distribution are 3.26 L and 4.32 L respectively. [1] The elimination half-life is 20 days with a mean clearance of 0.27 L/day.[1] Teprotumumab is suspected to be metabolized via proteolysis but its metabolism requires further investigation.[1] Possible drug interactions also have not been studied. No effect on pharmacokinetics have been found thus far based on age, weight, gender, or race.[1] Also, mild-moderate renal impairment has been found to have no effect but the effect of hepatic impairment remains unclear.[1] The pharmacodynamics of this medication have not been studied and require further research.

The medication is administered every 3 weeks for 8 total doses. The recommended dosing of this medication is 10 mg/kg for the initial dose and then 20mg/kg for the additional 7 doses.[1] It is administered intravenously over 90 minutes for the first 2 infusions. Patients responding well to the first 2 infusions can have the infusion time shortened to 60 minutes for the subsequent 6 infusions.

Smith et al conducted a multi-center, randomized, double-masked, placebo-controlled phase II clinical trial (NCT01868997) of 88 patients with active moderate to severe TED.[22] Enrolled patients were required to have active disease with clinical activity scores (CAS) of 4 or more for no more than 9 months. Patients with optic neuropathy were excluded. In addition, patients were excluded if they had prior surgery or medical treatment (except oral glucocorticoids of the equivalent of 1 gram of methylprednisolone or less with a 6-week washout period). All patients were euthyroid or had thyroid hormone levels within 50% of reference range. The included patients were randomized to teprotumumab or placebo. At week 24, the teprotumumab group had a significantly higher response rate of 69%, compared to 20% for the placebo group (p<0.001). A response had been defined as ≥ 2-point decrease in CAS and ≥ 2mm decrease in proptosis without worsening in the fellow eye. The teprotumumab group also had significant improvements in secondary outcomes, including proptosis, clinical activity score, subjective diplopia, and quality of life (based on the Graves ophthalmopathy specific quality of life questionnaire or GO-QOL). Of note, in the teprotumumab group, there was a shorter time to first response and higher grade of response than the placebo group.

Douglas et al conducted a multi-center, randomized, double-masked, placebo-controlled phase III clinical trial, the OPTIC trial, (NCT03298867) of 83 patients with active moderate to severe TED.[23] Selected using similar inclusion and exclusion criteria, enrolled patients were randomized to teprotumumab or placebo. In contrast to the phase II trial, the primary outcome was simplified to a proptosis response defined as a ≥ 2mm reduction of proptosis without an increase of ≥ 2mm in the fellow eye. At week 24, the teprotumumab group had a significantly higher proptosis response of 83% compared to 10% for the placebo group (p<0.001). The number needed to treat was 1.36. The median time to response was 6.4 weeks. The teprotumumab group also had a greater overall response, more patients with CAS score reduction to 0 or 1, greater mean change in proptosis, greater diplopia response, and greater mean change in quality of life (GO-QOL) scores when compared to the placebo group (all p<0.001). Six teprotumumab recipients who underwent orbital imaging showed reductions in extraocular muscle and orbital fat volume.[26] After a follow-up period of 48 weeks off-treatment, the proptosis response and diplopia response were maintained for most patients.[27]

Based on the clinical trials described above, teprotumumab was FDA approved in January 2020 for the treatment of TED.[1] Recent reports have suggested the utility of teprotumumab for patient populations not included in the trials. Ozzello et al reported a case of a patient with chronic TED, a CAS score of 1 and no examination findings of active inflammation who had noticeable improvement in proptosis and extraocular muscle volume on imaging after starting teprotumumab.[28] Sears et al reported a case of a patient with dysthyroid optic neuropathy who had active TED for 18 months before starting teprotumumab.[29] The patient had already undergone orbital radiation and was not a candidate for further steroids or orbital decompression given his comorbidities. After 2 infusions, the patient had improvement in visual acuity, relative afferent pupillary defect, Humphrey visual fields, proptosis and extraocular muscle size.[29] Further research on a larger scale is required for these populations.

Teprotumumab has been well tolerated. In the phase II and phase III clinical trials, most adverse events were mild, required no treatment and resolved as the intervention continued.[22][23] The most common adverse reactions are described in the table below.

Hyperglycemic reactions may occur in patients with preexisting diabetes but can be controlled with glucose monitoring and adjustment of diabetes medications.[22] In the phase II trial, these reactions were transient and the patients’ glucose tolerance returned to baseline after the intervention. This reaction is likely related to the mechanism of the drug and inhibition of the IGF-1R. Patients with inflammatory bowel disease (IBD) should also be monitored for exacerbations. In the phase II trial, a patient with ulcerative colitis developed severe diarrhea. [22] In addition, a patient with a recent diagnosis of ileitis and colitis was diagnosed with and treated for IBD while receiving the intervention.[22] Hearing impairment has been reported in recipients of teprotumumab. The 5 patients who developed hearing impairment in the phase III trial included 2 with hypoacusis, 1 with deafness, 1 with autophony, and 1 with a patulous Eustachian tube, which all resolved.[23]

There have been no deaths due to teprotumumab infusion. Infusion reactions have been reported in 4% of the teprotumumab recipients.[1] Serious adverse events occurred in 5 (12%) of the teprotumumab recipients in the phase II trial, and included diarrhea, inflammatory bowel disease, urinary retention, Hashimoto’s encephalopathy, and Escherichia sepsis, of which diarrhea and Hashimoto’s encephalopathy were categorized as possibly related to the drug.[22] In the phase III trial, there were 2 (5%) serious adverse events in the teprotumumab group.[23] These included an infusion reaction which resolved with hydrocortisone treatment and a pneumothorax which was considered likely unrelated to the medication.

Studies have not been conducted on pregnant women. Based on the mechanism of action and findings in animals, it may cause harm to the fetus and should not be used in pregnancy.[1] Appropriate contraception should be started before initiating the medication and continued until 6 months after the last dose.