Synchysis scintillans or cholesterolosis bulbi[1] is an ocular condition where there is accumulation of cholesterol crystals in the vitreous humor of the eye. Synchysis scintillans appears as small white floaters that freely move in the posterior part of the eye, giving a snow globe like effect. It is asymptomatic and untreatable and is often an incidental finding. On fundus examination, it is seen as a shower of golden particles in the vitreous.

Benson, in 1894, was the first to describe accurately and to differentiate synchysis scintillans [2]from asteroid hyalosis. There was some controversy about its existence even in 1983.[3] It is an asymptomatic condition, often found incidentally, where yellow crystals are seen floating in the vitreous. In synchysis scintillans, the vitreous liquifies in a process known as syneresis. Clinically, the highly reflective crystals are dispersed with the movement of the eye. Over time, the crystals will settle to the gravity-dependent portion of the vitreous cavity. This is often confused with asteroid hyalosis. 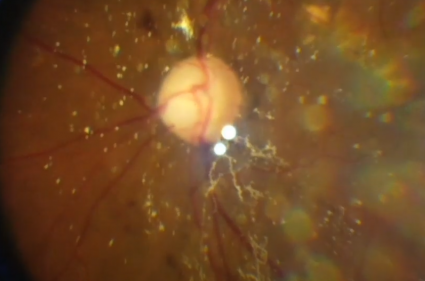 Synchysis scintillans is postulated to be due to a degenerative process in the vitreous. This can happen in any age group due to other ocular conditions like vitreous hemorrhage, hyphema, retinal detachment or chronic uveitis.[4] The crystals consists of degenerative material(cholesterol) not attached to the vitreous framework. Rarely, when vitreous gains access to the anterior chamber (e.g., in aphakia or subluxation), a synchysis scintillans of the anterior chamber can also be seen.

Synchysis scintillans is seen in a younger age group compared to asteroid hyalosis. There is no race or sex predilection. They also exhibit a bilateral presentation. Asteroid Hyalosis usually unilateral and more common in men. Synchisis scintillans is a rare condition that occurs in severely diseased eyes. 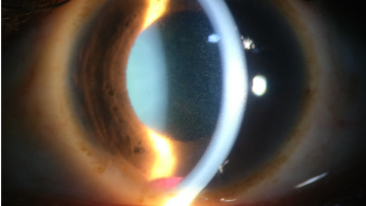 Traumatic uveitis and Hyphema can lead to Synchysis Scintillans

Synchysis scintillans is associated with the advanced stages of diabetic retinopathy, but the exact pathogenesis is unknown. Synchysis scintillans may occur after chronic uveitis, chronic or recurring vitreous hemorrhage or trauma. Crystal-like opacities may be observed in the vitreous as the bulk hemorrhage dissipates, or they may appear as flat, freely mobile, brown-white, refractile bodies in the anterior chamber.

Chemical studies demonstrate the presence of cholesterol crystals in these opacities, hence the condition is sometimes referred to as cholesterolosis bulbi. Synchysis scintillans is usually noted in the vitreous cavity, but there are reported cases of anterior chamber synchysis scintillans due to lens subluxation and anterior mobilisation of the vitreous through the pupillary area. The condition is also seen in degenerating eyes before the onset of phthisis bulbi.

Sometimes, synchysis scintillans may present in the anterior chamber often after aphakia and vitreous prolapse. This may even be maquerade as phacolytic glaucoma.[7]

Asteroid Hyalosis is characterized by the presence of small spherical opacities of yellowish white color, composed of lipids, calcium and phosphorus. This condition is usually unilateral and more common in men. Synchysis Scintillans is characterized by the presence of highly refractive vitreous opacities, flattened, brown or gold colored, composed of cholesterol. This condition occurs at an earlier age than asteroid hyalosis and is usually bilateral.

Uveitis or vascular work-up may be required to rule out either active or lingering inflammation, which can produce vitritis. Because vitreous haemorrhage is associated with degenerative processes that can raise intraocular pressure, patients must also be monitored for glaucoma.

A therapeutic strategy which targets oxidative stress may be effective in the treatment of synchysis patients.[8] With the exception of pars plana vitrectomy for cases with poor visual outcome, there is no effective management option for this condition.

Synchysis Scintillans is asymptomatic and without any complications. But often, they may be the result of chronic uveitis, lens dislocation or vitreous hemorrhage. There may be inflammation or raised Intra Ocular Pressure due to these conditions which have to be treated accordingly.[5] They may also be associated with retinal detachment and other conditions due to trauma.