Intumescent cataracts have both opacification and swelling of the crystalline lens and may be due to ocular trauma1. Unlike hypermature cataracts, intumescent cataracts present with prominent sectorial markings in the anterior cortex and may display a break in the capsule2. Performing an intact capsulorrhexis during cataract surgery is complicated by intralenticular pressure and the absence of the red reflex. These challenges can be overcome by capsular staining with Trypan blue, decompressing the liquified cortex, and utilizing anterior segment optical coherence tomography1,2.

An intumescent cataract is a complicated form of cataract with lens hydration and increased intralenticular pressure3.

Intumescent cataracts may be associated with either blunt trauma or intraocular surgery, particularly pars plana vitrectomy1,4. Traumatic cataracts occur in 5-10% of all ophthalmic trauma and presentation varies based on the mechanism of trauma and the integrity of the capsular bag5,6. Blunt trauma may trigger intumescence with post-inflammatory plaques, while small punctures may heal and cause only local opacities1. Systemic conditions such as diabetes mellitus are also associated with progression to intumescence4.

Intumescent cataracts display abnormalities in lens epithelial cells. Dysfunction of the sodium-potassium pump leads to imbalances in electrolytes and water that cause lens opacification7,8. Unique to intumescent cataracts, this Na-K pump dysfunction creates inward osmotic pressure and epithelial cell swelling9, with subsequent cellular lysis and cataract formation11. Transmission electron microscopy of lens epithelial cells reveals epithelial swelling, intraepithelial vacuolization, osmotic granule extrusion from the lens epithelial cell membrane, and breaks in the longitudinal integrity of lens capsule9,11,12. These extrusions of the basement membrane confer tensile weakness that may lead to surgical complications12.  Intraocular hydraulic forces may diffusely transfer the traumatic energy, rupture the capsule, and cause immediate or delayed opacification13. These patients are predisposed to elevated intraocular pressure and uveitis from the anomalous lens epithelial cells and capsules, as well as lens particle and protein leakage. Patients may develop phacolytic glaucoma from direct obstruction of trabecular outflow by macrophages engorged with lens protein; phacoantigenic uveitis can result from exposed lens protein, with or without elevated intraocular pressure4.

Intumescent cataracts can be prevented by avoiding trauma via protective eyewear and by controlling blood sugar levels in diabetics1,4. 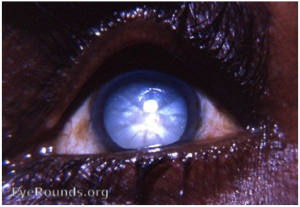 Intumescent cataracts due to physical damage or trauma may show a break in the capsule and pigment remnants on the anterior lens capsule (image 2). 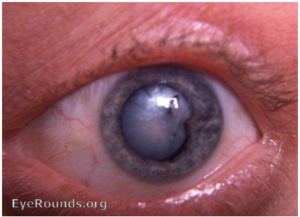 It is important to properly diagnose and classify intumescent cataracts as surgical protocols differ from those used to treat immature cataracts. Slit lamp biomicroscopy reveals a pearly white lens with a tense anterior capsule. Anterior segment optical coherence tomography showing a lens thickness of 5.36 mm or greater coupled with a spherical lens shape indicates an intumescent cataract14. Scheimpflug densitometry may also be used to evaluate the opacity of the lens; a high density suggests the large nucleus more specific to intumescent cataracts14.

Surgery is complicated by the absence of the red reflex creating poor visibility of the lens capsule in addition to lens intumescence1. Capsular staining is the most common technique to manage the anterior capsule; oblique illumination from a fiber optic light pipe has also been used to improve visibility1. Other authors have proposed phacocapsulotomy to release intralenticular fluid and reduce radial tear formation18, 19.

A white cataract flanked by a widely split, trypan blue-stained capsule has been referred to as the Argentinian flag sign, and can be indicative of not only radial extension of the anterior capsule, but extension through the posterior capsule. This complication can occur immediately upon puncturing the anterior capsule, and can be managed by re-administration of viscoelastic and creation of the capsulorrhexis flap with horizontal forces directed centrally22. Complications include posterior capsule rupture, vitreous loss, zonular rupture, retained or dropped nuclear material, inability to implant the intraocular lens, prolonged surgical time, and corneal endothelial damage19, 23.

Intumescent lenses also cause thinned, stretched, and mobile posterior capsules. The excess mobility and capsular fragility increase the risk of posterior capsule rupture4. These capsules also lack a protective epinucleus; dispersive viscoelastic can be injected behind the nucleus during phacoemulsification to provide an artificial epinucleus for capsular protection4. Lens hydration in younger patients both softens the nucleus and opacifies the cortex4. These nuclei may require less ultrasound for removal and no hydrodissection or hydrodelineation4. Capsules in younger patients may also be overstretched, hypermobile, and prone to rupture4.

Zonular weakness or absence are more common among both elderly patients and patients with traumatic cataracts4. A capsular tension ring can be placed if zonular weakness is suspected but only in the presence of an intact anterior and posterior capsule4. Additional stability can be provided by a sutured capsule tension ring if there is severe loss of zonules4. A transscleral sutured intraocular lens or an anterior chamber intraocular lens are viable alternatives if the capsular bag and sulcus are not viable options4.

Prognosis in intumescent cataracts is good despite the increased risk of surgical complications, uveitis, and glaucoma, with up to 92% of patients having best-corrected visual acuity of 20/40 or better at 6-weeks post procedure20.