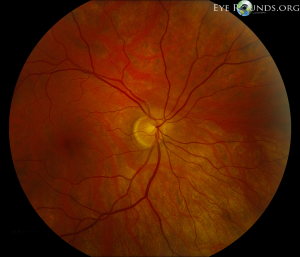 Superior Segmental Optic Nerve Hypoplasia (SSONH), also termed “topless optic disc,”[1] is a congenital condition characterized by reduced numbers of regional ganglion cells (RGCs) in the superior optic disc. This condition may feature four characteristic findings: a superior entrance of the central retinal artery, pallor of the superior optic disc, superior peripapillary scleral halo, and thinning of the superior retinal nerve fiber layer (RNFL)[2]. Although the pathogenesis is unclear, there is a strong association between SSONH and maternal diabetes.

SSONH was first described by Robert Petersen and David Walton in 1977, who reported 17 children born from diabetic mothers who all exhibited superior ONH with corresponding inferior altitudinal or sectoral visual field (VF) defects but normal visual acuity[3]. The term SSONH was later coined in 1989 by Robert Kim et. al. in an article that reviewed 10 children with SSONH born from diabetic mothers, and this was also the article that first described the four distinctive features found in the optic discs of SSONH patients[2]. 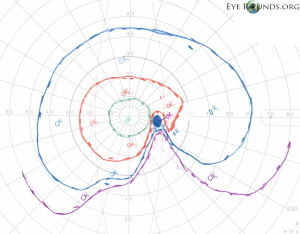 The true prevalence of SSONH is difficult to determine because it is often left undiagnosed due to its mild features. It was reported to be 0.08% in a 2014 study based in Korea[4], but other studies report rates of 0.3% in the Japanese population[5] and 0.24% in a retrospective study based on a national survey in Korea[6].

The etiology of SSONH involves maternal factors, prenatal exposures, and genetic factors. The RNFL thinning is due to loss of the RGCs. In normal development, the optic nerve begins with 3.7 million axons which undergo apoptosis to 1.1 million axons by the 29th week of gestation[7]. Although it is not clear if the deficiency of RGCs in SSONH is due to lack of primary formation or apoptosis[8], a 1998 study found increased apoptotic retinal cells in diabetic patients[9] which suggests a possible causal link between maternal hyperglycemia and SSONH. Another feature of SSONH involves an anomalous superior retina. Ephrin-B1/B2 (ligands) and EphB1-4 (receptors) are involved in dorsal/ventral patterning and RGCs axon pathfinding[10], which may explain the inferior/superior RGCs differences found in SSONH. However, the sharp demarcation between the superior and inferior portions does not align with the gradual change that would be seen in signaling irregularities; thus, optic nerve head injury followed by regional cell death may serve as a better explanation for this phenomenon[8].

Maternal diabetes, female sex, short gestation time, and low birth weight are thought to be associated with SSONH[1]. Although maternal gestational diabetes is considered a strong risk factor for SSONH and multiple animal studies have demonstrated anomalous development of ocular structures and RGC death under hyperglycemic conditions,[11][12][13] cases of SSONH without maternal history of diabetes have also been reported in the literature[4][14].

SSONH can present as an isolated ocular finding with mild symptoms that do not interfere with daily functions[15] and is often incidentally diagnosed. Most cases of SSONH have some form of inferior VF defect,[4][14] however there is no general agreement as some reports only found about one-half of eyes with any VF defect[16]. Visual acuity, intraocular pressure, pupillary function, color vision, alignment, and ocular motility are often normal[8].

The four characteristic findings of SSONH in the optic disc include a relative superior entrance of the central retinal artery, pallor of the superior disc, superior peripapillary halo, and thinning of the superior peripapillary nerve fiber layer[2]. The presence of all 4 of these characteristics is variable so most studies require only 2 of the 4 optic disc features as well as nonprogressive visual field (VF) loss to diagnose SSONH[8]. However, there is still contention over this diagnostic criteria as Asian populations with SSONH typically do not exhibit the four characteristic findings, and instead exhibit nerve fiber layer thinning in the superior nasal region[17]. Another 2008 study concluded that optic disc morphology is not important in the diagnosis of SSONH and instead, characteristic visual field defect patterns on Goldmann perimetry and corresponding RNFL defects should be referenced[14].

Optical coherence tomography (OCT) provides a quantitative way to evaluate optic nerve hypoplasia. On OCT imaging, patients with SSONH exhibit a significantly thinner average RNFL (31.2 mm vs 105.0 mm) with the 12, 1, and 2 o’clock segments being most useful in diagnosis[18][19]. Although the superior portion of the retina is most impacted by SSONH, all quadrants of the RNFL are impacted16 which possibly suggests generalized effects on the retina as well.

Spectral-domain OCT can also reveal greater extension of the retinal pigment epithelium (RPE)/Bruch membrane (BM) complex over the lamina cribrosa (average of 295.9 µm in SSONH patients compared to 24.3 µm in healthy patients)[20]. However, relatively few studies have investigated this finding and thus it remains an unreliable diagnostic criteria for SSONH.

SSONH has shared characteristics with glaucomatous optic neuropathy (focal VF defects, rim thinning, and local RNFL loss) which can make the two diagnoses difficult to distinguish[17]. There have not yet been definitive diagnostic criteria that would distinguish SSONH from glaucoma except for long-term stability of the optic disc and the visual field defect.

Characteristics that would support SSONH over glaucoma include a history of maternal gestational diabetes, identification of the four characteristic features of the optic disc, presence of superonasal RNFL loss rather than inferotemporal RNFL loss[21] (especially in Asian individuals)[17], overhang of the RPE/BM complex[20], and loss of the inferotemporal VF. There is also evidence that supports OCT angiography as a potential tool for identifying SSONH, as SSONH patients exhibit lower nasal radial peripapillary capillary vessel density (RPCVD) and higher inferior and temporal RPCVD compared to glaucoma patients[22].

SSONH is non-progressive and has a good prognosis. Studies that follow SSONH patients for many years display stationary VF deficits and optic disc morphology[14][23]. Thus, no treatment is necessary.

SSONH is a congenital condition that affects the superior optic disc, thus affecting the inferior VF. The exact pathophysiology is unknown, but there is a strong association with maternal gestational diabetes. It shares similar features to glaucoma, but can be distinguished by optic disc characteristics, RNFL defects, and RPE/BM complex overhang. It is often diagnosed incidentally and may have a favorable prognosis without treatment.