Superior ophthalmic vein thrombosis (SOVT) is a rare vision- and life-threatening complication with many underlying etiologies such as infectious and inflammatory orbital disease, trauma, neoplasm, and a hypercoagulable state. Presenting signs of SOVT are caused by venous congestion and may include painful proptosis, eyelid swelling, ptosis, impairment in motility, and vision loss.[1] [2] 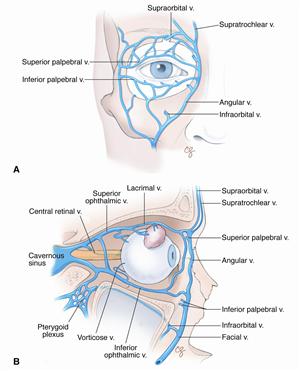 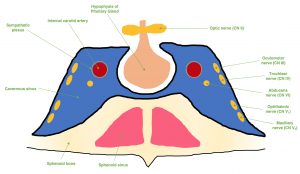 Figure 2. Cross-section of the cavernous sinus and associated anatomical structures

SOVT is caused by altered venous blood flow, and can be due to anatomic or systemic causes. Risk factors usually include at least one of Virchow’s triad of vascular damage, stasis, or hypercoaguability.[3] SOVT may present similarly to, or occur simultaneously to orbital cellulitis or cavernous sinus thrombosis (CST).[1][2] When SOVT develops into CST, there is subsequent involvement of the cranial nerves in the cavernous sinus along with intracranial complications resulting in cavernous sinus syndrome (Figure 2).

Causes of SOVT can be separated into septic or aseptic (Table 1).

Septic causes reported in the literature include infections of the sinuses, orbit, teeth, and face. The offending pathogens may be aerobic or anaerobic bacteria, with Staphylococcus aureus and streptococci reported as the most common causes.[3][4]

The incidence of SOVT is not known, but is typically described as rare. A case series published by van der Poel et al. reported only 69 total cases in the literature from 1975 to 2019, with 77.8% of those cases found to be from aseptic causes.[1] A more recent study by Sotoudeh et al. in 2019 reported an additional 24 cases, 50% of which were from septic SOVT.[2]

The clinical presentation of SOVT can be explained by orbital congestion due to impaired venous drainage.[1] Patients typically present with pain, chemosis, eyelid edema, ptosis, proptosis, limited ocular motility, and impaired visual acuity. Typically, the complaints will be unilateral, but if the patient has concurrent CST, they may have an onset with unilateral ophthalmic signs that rapidly become bilateral.[7] Systemic conditions may also cause bilateral involvement.[8]

The symptoms of SOVT can overlap with orbital cellulitis and cavernous sinus thrombosis, making imaging critical for diagnosis.[2] The preferred imaging modality is contrast enhanced computed tomography (CT) or magnetic resonance (MR) angiography. Imaging can confirm a diagnosis of an isolated SOVT, or detect the presence of SOVT with concurrent cavernous sinus thrombosis and orbital cellulitis.[1][3][4]

On a contrast enhanced CT, SOVT is characterized by an enlarged superior ophthalmic vein with an indistinct outer border due to perivascular edema. A filling defect may be seen within the SOV itself, or a thin lining may be present close to the vessel wall due to either vessel wall enhancement or a lumen between the clot and the vessel.[9]

Additional sequences such as diffusion-weighted imaging may be useful if contrast medium is contraindicated.[10]

If a patient presents without sepsis and low concern for orbital cellulitis or sinusitis, other underlying conditions must be considered. A thorough laboratory work up should be performed for possible underlying systemic and hypercoagulable disorders (Table 1).

Optimal therapy for SOVT is not well defined and is subject to debate. It is generally accepted that intervention should be guided by etiology, if one is found. Possible treatments may include antibiotics, anticoagulation, steroids, and/or surgery. As SOVT is rare, there have been no large-scale studies or randomized trials.

Infection is a common cause of SOVT. Empiric treatment with a broad-spectrum antibiotic is recommended if there is concern for sepsis, orbital cellulitis, or cavernous sinus thrombosis.[1] Broad spectrum antibiotics, such as vancomycin and ceftazidime, can be used while awaiting culture results.[6] Some literature states antibiotics should be extended for two weeks beyond clinical resolution of an infection as often pathogens are sequestered within a thrombus.[4] There has not been a consensus on duration of antibiotic therapy.[1]

Systemic corticosteroids are also a controversial treatment in SOVT, and there is no aggregate evidence for it at this time.[1] If the etiology is believed to be non-infectious and more consistent with an orbital inflammatory syndrome, steroids can be considered. Steroids may aid in symptomatic improvement by relieving orbital congestion and reducing proptosis.[3][5]

If an orbital abscess or sinus disease is found, surgical intervention is indicated to drain the primary source of infection.[7] The other role for surgery would be if orbital crowding caused optic nerve compression, such as in thyroid eye disease. In these cases, orbital decompression is important in preventing vision loss.[12]

Prognosis of SOVT typically depends on the underlying etiology. Early detection of SOVT is crucial to prevent progression to CST and its severe effects.[2] SOVT mostly resolves without any serious sequelae, however in some cases visual acuity may not be regained.[1]